PAKISTAN: The Long Marchers have completed 700 km and entered Karachi after travelling 27 days on foot 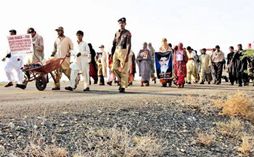 The Long March for the Baloch missing persons has entered its 27th day after completing 690 KMs. It will reach its intended destination at the Karachi Press Club, Karachi, the capital of Sindh province tomorrow, November 22. Today the marchers will reach the suburbs of Karachi where the local people will welcome them and make arrangements for their accommodations.

People in good numbers have been joining the Long March in it’s the long route from Balochistan province. The marchers have suffered bruised and blistered feet but no medical treatment has been provided to them by the authorities. The only reason they have been able to continue without suffering from dehydration was due to the people of different villages who provided them with water, food and some medical relief.

The participants, consisting of women and children, have been threatened and intimidated by the unknown persons through messages on their cell phones. They have been told that if they do not stop the Long March they would be kidnapped or killed.

On November 19, a car made three attempts to hit the marchers at Windar. The grey coloured Alto car first tried to hit the leader of the march, Mama Qadeer, who just left the road. Denied of its first victim the car then tried to ram the marchers. Fortunately they were prepared and divided into two rows so that the car passed through them harmlessly. On the third attempt the car hit the wheelbarrow in which the marchers were carrying their medicines, water and clothes. The people of the nearby village came out and forced the driver of the vehicle to leave.

It has been 26 days since the women and children — whose loved ones have been missing for years — began walking on the RCD highway. The federal and provincial governments have not taken any notice of the Long March and made no effort to assure the participants that they would help in the recovery of the disappeared persons.

Yesterday when the marchers reached the Hub city, located at the border of Sindh and Balochistan, the Lasbela Bar Association and Baloch student organisations welcomed them. The local people joined the March from some distance away and brought them to the city, raising slogans against the government and military and accused the state intelligence agencies for the enforced disappearances and extrajudicial killings of the Baloch people. The local people welcomed the marchers with rose petals and demanded that Balochistan become an independent state.

The long march participants will set up a hunger strike camp in front of the Karachi Press Club. “We will continue our protest until all the missing persons reappear or are produced before the court,” said Qadir.

Sammi Baloch, the daughter of kidnapped Din Mohamed Marri, said she had left school to participate in the protest. “My father has gone missing for three years and our family is immensely disturbed because we are all dependent on him. I want my father back,” she said. Marri was kidnapped from Khuzdar in 2009.

Farzana Majeed, the sister of missing student leader, Zakir Majeed, said the protesters have continued their journey with unwavering hope as their strength.

The president of the VBMP Nasurllah Baloch said international humanitarian organisations should take notice of these human rights abuses and launch an independent investigation.

The Asian Human Rights Commission urges the Sindh government to provide security for the marchers when they enter the province from Balochistan on Friday. It is feared that some religious sectarian organisations have called for a protest and that the marchers may be targeted by Islamic religious parties to appease the security establishment. The government must also provide medical treatment for those marchers that need it.

PHILIPPINES: Reblando: No justice under Aquino »