Home / News / PAKISTAN: Bombs do not discriminate between Muslims and Christians

PAKISTAN: Bombs do not discriminate between Muslims and Christians 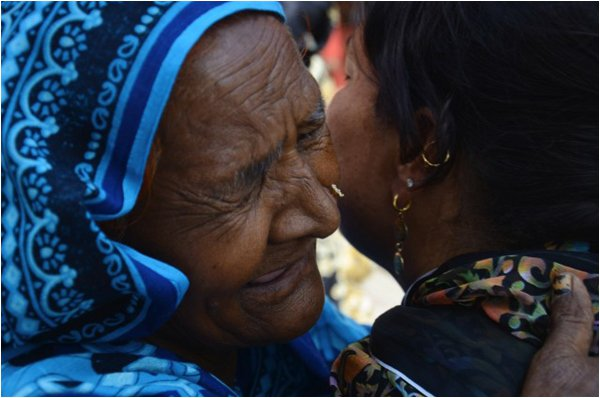 Tahira Gill is fighting for her life in Jinnah Hospital’s intensive care unit. The 55-year-old woman was a nurse in the General Hospital, before she got injured in the Gulshan-e-Iqbal Park bombing on March 27. Her husband passed away some years ago, and her only son, Zeeshan Gill (23), is being trained as a male nurse. He was not allowed a holiday on Easter to be with his mother. She called her friend Ester Saleem (50) and her family to go on an outing with her after the church service. They were at the park when a suicide bomb explosion killed more than 72 people and injured hundreds of others.

Most Pakistani Christians live in Punjab, and their highest concentration is in Lahore.

“We were eleven people in all. We had arrived at the park only 10 minutes before the blast,” said Ester, who is being treated for a fractured arm at the General Hospital. “It was so crowded that we decided to go back. But a deluge of people was pouring in, and going back became almost impossible.”

With a broken leg, I dragged myself to a rickshaw, carrying my younger brother
It was the deadliest terrorist attack in the history of Punjab, and the deadliest in Pakistan since the 2014 massacre of 134 schoolchildren at a military-run school in Peshawar.

“The explosion was so powerful that it threw my brother Sharoon and I, and some of our friends, at least five feet away from where we were standing,” said Irfan Patras, who is being treated in the General Hospital for a fractured leg. Seventeen-year-old Irfan is a student of Ghauri Wisdom High School, in the mostly-Christian Youhannabad locality of Lahore. “Within no time, police vans and ambulances arrived at the scene and began taking the injured to Jinnah Hospital. But no one was paying attention to Sharoon, who was badly hurt. I attended to him for a while, and then dragged myself to a rickshaw, carrying him with a broken leg. I put Sharoon inside the vehicle, and also saw an old injured woman who had been burnt, and a child. We rushed to Jinnah Hospital.”

Irfan and his friends had been up all night on the eve of Easter, and went to the Sunrise Service at 4am. Then, they slept until the afternoon. “My friends Irfan, Adnan and Wasif called me in the evening to join them on a trip to Fortress Stadium. When Sharoon heard that, he insisted on going with us.” They set out to go to Fortress Stadium, but their rickshaw driver told them he didn’t know where it was, and asked if he could take them to Gulshan-e-Iqbal Park instead. They agreed.

Sharoon succumbed to his injuries and died that evening. He was buried the next day. When I spoke to Irfan, he was unaware of that. His family did not want him to go through the trauma so soon. They couldn’t keep the secret from him for too long.

A splinter group of the Taliban, which calls itself Jamaatul Ahrar, claimed responsibility for the attack. They said they had targeted Christians celebrating Easter. But only 23 of those who died were Christians. The rest of them were Muslims.

Only 23 of those who died were Christians
Across Irfan’s bed in the General Hospital, three members of a Muslim family had also been hospitalized. They had come from Sahiwal to celebrate their holidays after the children’s exams. They had not particularly paid attention to the fact that it was Easter Sunday. They rented an entire bus for the 35 members of the extended family, and set out for the popular recreation destination in Lahore. “Moments after we entered the park, there was an explosion,” 26-year-old Sidra Aslam told me. She teaches at a school in Sahiwal. “It took us a while to be able to get inside, because it was crowded. I was about 50 feet from the site of the explosion. There was blood and smoke everywhere. That is all I can remember.”

Three of her relatives were killed in the bombing and 24 were injured. She had noticed that four of the patients in the small ward were Christians. “But I do not believe only Christians suffer because of terrorism,” she said. “It is a threat to the entire country, and not just to certain people or communities.”

“Christians took part in the Pakistan movement, and are giving our blood to save Pakistan,” said Napoleon Qayyum, a Christian leader of the Pakistan People’s Party. “Unlike the Youhannabad incident in March last year, we see that this incident has brought the two communities closer.”

The first major attack on Christians in the recent wave of terrorism happened right after the 9/11 attacks. On Sunday, October 28, 2001, four gunmen entered St Dominic’s Catholic Church in Bahawalpur and fired indiscriminately, killing 15 worshippers and a police guard. Then, on March 17, 2002, five people were killed when terrorists targeted the Islamabad International Protestant Church. Six Christians died in an attack on the Christian Missionary School in Murree on August 5, 2002. Four days later, four Christian worshippers were killed in an attack on Taxila Mission Hospital Chapel on a Sunday.

On September 25 the same year, seven Christians aid workers of Idara Amn-o-Insaaf (Institute for Peace and Justice), a Christian charity in Karachi, were massacred in their office. Before the year ended, three women were killed and 15 people were injured in an attack on the United Presbyterian Church near Sialkot on December 25. They were celebrating Christmas.

Communal attacks on the Christian community continued throughout the decade. Major incidents where Christian communities were targeted by their Muslim neighbors over accusations of blasphemy include Sangla Hill in 2005, Gojra in 2009, Islamabad in 2012 (following the Rimsha Masih case), and Lahore’s Joseph Colony in 2013 (when protestors attacked and burned Christians’ houses). A Christian couple was burned alive by an angry mob in November 2014 and a similar effort in Sheikhupura in July 2015 was thwarted.

Police have been able to avert such communal violence since then.

A year ago, on March 15, 2015, suicide bombers attacked two churches in Youhannabad, killing at least 14 worshippers. The death toll would have been much higher if church volunteers on security duty had not acted quickly. In 2013, a suicide bomber blew himself up outside the All Saints’ Memorial Church in Peshawar, where at least 78 worshippers were killed.

Punjab parliamentarian Mary Gill says the terrorists targeted the park because security around churches had been heightened. “This was probably the first time a park was targeted,” she said.

For Anglican Bishop of Multan Leo Roderick Paul, it is a matter of concern that guarding the churches can no longer keep the Christian community safe. “Our people are not safe anywhere,” he says.

Mary Gill believes this is a sign that terrorism ultimately threatens people of all faiths. This realization, she hopes, will bring various communities closer together.

The 2011 Pew Research Centre report titled Rising Restrictions on Religion characterizes Pakistan as the third least tolerant country to religious diversity. Another of their reports, Common Concerns About Islamic Extremism: Muslim-Western Tensions Persist, says that only 16 percent of Muslims in Pakistan hold a positive opinion of Christians.

Asif Aqeel is a Journalist, human rights activist, research on the issues of religious minorities and can be reached at; asifaqeel@gmail.com
……………..