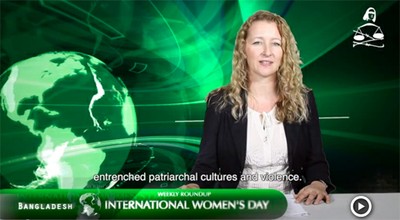 In this week’s programme we bring you coverage of the following stories from across Asia.

A fact-finding report has been released about the Cambodian government crackdown which killed four and injured many more during the garment worker demonstrations in early January. The AHRC joined the fact-finding mission to find out what triggered the demonstrations and the crackdown.

In Pakistan, the historic Long March has reached Islamabad after over 100 days of marching from Quetta, via Karachi. Relatives of the Balochi disappeared and extra-judicially killed demand justice and an end to the state violence in their state.

Two men have been tortured and shot by police in West Sumatra, Indonesia. The men were accused of theft despite witnesses placing them at work in a factory during the time of the theft.

Lastly, thousands of journalists and members of the general public marched in Hong Kong to protest against the brutal knife attack of the former chief editor of Ming Pao newspaper. The demonstrators linked the attack with a general effort by Beijing to try to influence the independence of Hong Kong’s vibrant media landscape.

The bulletin can be seen online at AHRC YouTube. We welcome both human rights feeds to be considered for weekly news bulletin and your suggestions to improve our news channel. Please write to news@ahrc.asia. You can also watch our Weekly Roundup on Facebook.

« INDIA: A democracy that gets hurt by books, but not the body bags