Home / News / INDONESIA: After 17 years of reform, who will protect human rights?

INDONESIA: After 17 years of reform, who will protect human rights? 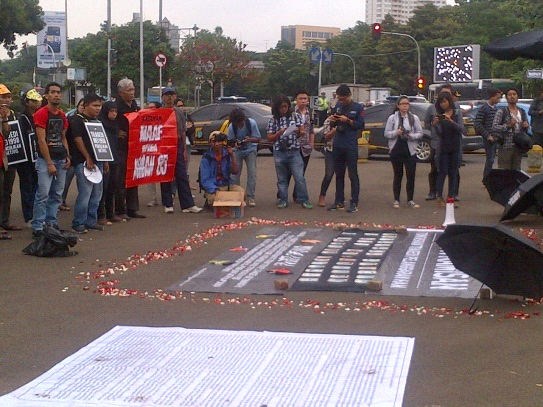 Major human rights violations abound. There is impunity for past abuses, torture and fabricated cases (unfair trial), assorted violations in the mining and plantation area, and restrictions to freedom of religion and belief.

Furthermore, Papua and West Papua provinces remain in the dark, with promises having been belied. Post-conflict Aceh faces uncertainty boxed between Sharia law and the impunity that has tagged along with violent military operation.

Then, there is no sign of security sector reform. There is weakening of the Human Rights Court and the Anti-Corruption Court, and the existent anti-human rights regulations have been used as a legal basis to severely restrict human rights. This situation has meant a step backwards for Indonesia’s transitional democracy and the protection of human rights.

The country actually has considerable laws and infrastructure to protect human rights. For instance, in the last ten years, the government has established several independent commissions, namely the Judicial Commission (KY), the Ombudsman, the Prosecutor Commission (Komisi Kejaksaan), and the Agency of Victim and Witness Protection (LPSK). All these commissions are supposed to favor human rights protection. However, they face difficulties in protecting human rights, and violations still occur widely.

Indonesia also has some specific regulations to protect human rights, for instance the Law No. 26 of 2000 on Human Rights Court, Law No. 9 of 1999 on Human Rights, and Government Regulation (PP) No. 3 of 2002 on Compensation, Restitution, and Rehabilitation for Victims of Gross Violations of Human Rights.

Besides these regulations and the established infrastructure, the AHRC notes that the current government has issued key documents to be used to strengthen protection of human rights, namely Nawacita (Vision and Mission), the National Mid Term Development Plan (RPJMN) 2015-2019, and the Presidential Decree No. 75 of 2015 on the National Action Plan on Human Rights (RANHAM), 2015-2019.

However, there is something missing from the picture. As stated earlier this year by Bijo Francis, Executive Director of the AHRC:

“one of the serious problems why reform and protection of human rights do not show any progress, while otherwise shows step back, [is] because the criminal justice system remains fragile. Accountability of law enforcement agencies [is] questionable, [there is] no significant reform in the criminal justice processes, pre detention period still become very serious problem, where Indonesia is the only country that applies detention of suspects or accused persons for 120 days before the court.”

In the last ten years, Indonesia has faced the serious problem of overcrowded prisons. Currently, according to the Ditjen Pas (Directory General of Prison and Detention), the total number of prisoners in Indonesia are 170,000, and 34 percent of them are in pre-detention.

In sum, the main problem facing human rights protection in Indonesia is the lack of government commitment and political will. The Executive and Legislature are not unanimous in protecting against and solving various persistent human rights violations. The current government’s main priority is not to strengthen human rights protection, but to focus on economic development and opening up space for international investment.

The AHRC notes that business sectors have contributed significantly towards causing human rights violations in Indonesia. Land grabbing, forced eviction of local indigenous people and environmental damages, are some of the consequences of business conducted by the private sector in Indonesia. In its latest submission to the UN Human Rights Council, the AHRC’s sister organization, the Asian Legal Resource Centre (ALRC), reported and documented that the Master Plan for Acceleration and Expansion of Indonesia’s Economic Development (MP3EI), launched in 2011, has been continued by the current government. The MP3EI project has contributed to significant land grabbing and human rights violations in the mining and plantation area.

Therefore, the AHRC calls for the government of Indonesia to:

• Guarantee the protection of human rights by increasing accountability in the State apparatus and ensuring the same human rights violations do not recur.

• Ensure that criminal justice reform becomes the main priority and is implemented. The government should also review all regulations not in line with human rights principles.

• Welcome any request for a country visit by UN Special Rapporteurs to strengthen the accountability and standard of human rights protection.

• Prioritize human rights protection in Papua and West Papua provinces, ensuring that every human rights violation there is appropriately punished.

• Ensure that the local reconciliation commission in Aceh will not be rejected by the central government, and that both central and local governments will review every Sharia law not in line with the 1945 Indonesian Constitution and the human rights instruments to which Indonesia is party.