PAKISTAN: The Long March against disappearances and extrajudicial killings in Balochistan commences

The relatives of missing persons from Balochistan started a 730 kilometre peaceful long march for the recovery of disappeared persons. The participants assembled and started their march from the Quetta Press Club yesterday. The rally includes women and children and will reach Karachi, the capital of Sindh province after one week. The long march is lead by a seven-year-old son of Jalil Reki, who was extrajudicially killed after a year of his disappearance in an ISI torture cell. Mr. Nasrullah Baloch, the chairperson of Voice for Missing Baloch Persons (VMBP) whose uncle has been missing for 11 year years, Mr. Mama Qadeer Baloch, whose cousin has been missing since 2001 and whose son who was killed during his detention by the military, and Ms. Farzana Majeed, the sister of Mr. Zakir Majeed Baloch, who has been missing since 2009 after his arrest by the Frontier Corp (FC) are also taking part in the march. 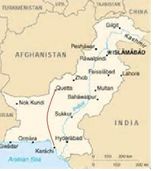 Participants of the ‘long march’ began their journey at the local press club and it will culminate in a sit-in outside the Karachi Press Club where they will have an indefinite hunger strike. The participants are raising slogans against Pakistan and demanding the freedom of Balochistan from Pakistan.

At the time of the start of the long march the Chief Minister of Balochistan, Dr. Abdul Malik was addressing a ‘meet the press’ at the Karachi Press Club and high lighting his government’s endeavours to maintain the law and order. However, with a smile he confessed that his government had failed to solve the issue of disappearances. This was a clear indication of the weakness on the part of the government of Balochistan in that it does not have control of the law enforcement agencies to solve the issue of disappearances which is increasing with the passing of every day.

The people of Balochistan have resorted to the long march of 730 kilometres after finding no respite in the extrajudicial killings and enforced disappearances. They have also been betrayed by the judiciary, particularly the Supreme Court of Pakistan which is hearing cases of enforced disappearances but has done nothing to stop them. This has happened despite the fact that even when evidence is presented to the Supreme Court about the presence of many disappeared persons in military torture cells the courts have failed to take action against the military and other law enforcement agencies. The military has also arrogantly refused to appear before the courts and on many occasions they have used the media houses to malign the court which has forced the judicial officers to just use harsh words. In fact, the court has not decided on any case of disappearance since 2005.

The participants of the march said they were undertaking the long and arduous journey to highlight the plight of missing persons who are languishing in secret detention centres. The participants said that they want to draw the attention of the international community to the issue of missing persons because all institutions of the country, including the higher judiciary, have failed to ensure the recovery of disappeared persons or stop the practice of dumping their mutilated bodies.

The Asian Human Rights Commission (AHRC) expresses its solidarity with the Baloch people in their struggle for the recovery of missing persons and condemns the extrajudicial killings. It urges the civil society of Pakistan not to sit aloof when Balochistan is bleeding and every day the extrajudicial killings by the law enforcement agencies continue. The Balochis are being pushed to the corner for demanding their fundamental rights. The civil society must join the long march and make it successful so that the menace of disappearances and extrajudicial killings can be eliminated from the country. The civil society organizations must arrange camps along the route of the long march and provide all the essential items to the protestors, especially the women and children.

The AHRC warns the government of Pakistan, the military and the law enforcement agencies that if they take violent action against the peaceful marchers they will face dire consequences and the peace of the country will be further shattered. The international community will be witnessing the march and supporting the lawful demands of the people. Any violence against the marchers or disruption of the march itself will reflect very badly on the country and the government of Prime Minister Nawaz Sharif.