We wish to share with you the following statement from the Free Zara Alvarez Movement.

Today, it has been one year since Zara Alvarez was illegally arrested on Oct 30, 2012. Yet, the human rights defender continues to face two fabricated charges of murder and robbery in band, suffers the separation from her four-year-old daughter and the daily hardship of a life in prison. The separation of mother and child became even more painful when Zara was transferred from the Cadiz City Jail to the Negros Occidental District Jail on August 16 and again to the Bacolod City District Jail on October 2, both jails are about 70km away from Cadiz. Visits became more difficult and more seldom as every visit involves a lot of time and financial resources. Yet, Zara’s prison conditions also worsened.

As a “newcomer” in the Bacolod City District Jail, she is being padlocked for two months, only allowed to leave the cell to receive visitors. Currently she shares this cell with 15 other women. They sleep on the floor, no running water, no separate wash room and toilet. As a consequence, she now suffers from a strong cough, allergies and diarrhea.

Despite these trials, we are confident that truth will reveal and justice prevails. As the venue of the murder case has transferred too, we are hopeful that this will add to the independence and impartiality of the court proceedings, exposing the political repression behind the systematic filing of fabricated charges against her and against many more, resulting in more than 450 political prisoners nationwide.

One year after Zara’s arrest, we would like to take this opportunity to thank you for your support, your prayers, your postcards and letters and the many pictures we received for tomorrow’s anniversary. Please continue walking with us on this journey, calling for Justice and for an End to fabricated charges against activists and human rights defenders!

Please continue to join us calling her home! Attached please see Zara’s letter to the President and the result of the picture campaign! Feel free to circulate both! 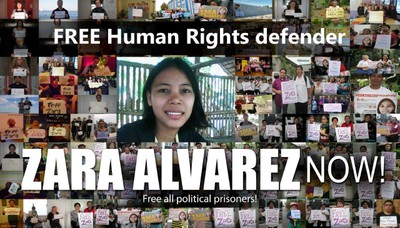 Please see below the letter addressed to His Excellency, President Aquino III from Ms. Alvarez:

Greetings of Peace from the Bacolod City District Jail!

I am Zara Reboton Alvarez, 32 years old, a native of Cadiz City, Negros Occidental, a political activist, a human rights defender and a single mother to a 4-year-old daughter.

I am currently detained at the Bacolod City District Jail. I have been languishing in jail for 12 months. One year ago, on October 30, 2012 more than 30 filly armed men, a composite of the 62 TB and Special Action Force (SAF) arrested me. The army was later joined by police officers.

The warrant of arrest, under which I am currently detained, falsely charges me with the murder of 1. Lieutenant Archie Polenzo of the Philippine Army on March 07, 2010. Along with several other John/Jane Does my name was amended to this case on July 31, 2012. While already detained in the Cadiz City Jail another warrant of arrest was served last March, 2013. It implicates me, along with several other activists in a robbery-in-band case that allegedly took place in July 2011.

In both cases I was not served a subpoena and both warrants of arrest bear a defective name and address. Moreover, on October 30, 2012, the arresting soldiers and police officers did not introduce themselves to me or inform me of my rights, but even mislead me with false identities.

Even though the cases filed against me are already within the jurisdiction of the Regional Trial Courts of Bacolod City and Sagay City, respectively, I appeal to your empathy and attention as Philippine President and to your wisdom in leading the country to a path of Justice.

I know that once you experienced being the son of a political prisoner and I believe you still understand and feel the pain of being separated from your loved ones, your father in particular. I am therefore confident that you can also identify with the pain of a 4-year-old child who was used to her mother being there, to bring her to school, to care for her in sickness and to feed and guide her, to be with her day and night, but is now deprived of my motherly care.

As a single mother being separated from my child, I agonize daily about her well-being and the effect our forced separation may have on her.

Therefore, I sincerely hope that your good office will conduct an investigation or review my case and ensure a proper and speedy judiciary process. I am confident that a judicial process that meets the required non-arbitrary standards of the rule of law will affirm my innocence and enable me to reunite with my family and most especially my child outside this jail.

Your Excellency, I am one of many activists and human rights defenders facing the pain of being tagged and imprisoned as a criminal. I would like to bring to your attention the alarming number of indiscriminate charges filed against perceived political dissenters. I appeal to you as Commander-in-Chief, to restrain the rank-and-file and officer corps of the Armed Forces from using questionable sources and means to include political activists and human rights defenders in their legal offensives and military Oplan Bayanihan.

Furthermore, I appeal for you to order a study of all charges filed by the Armed Forces against suspected insurgents since the time of President Arroyo so that you can see for yourself the indiscriminate pattern of the AFP in demonizing those who seek social change and in criminalizing legitimate dissent.

With deep concern for all children, including my daughter, I still hope that the abuses by the military during the Marcos and Arroyo governments will be ended under your administration, so that children will no longer be traumatized in separation from their parents whether they are imprisoned like me, disappeared like Jonas Burgos or killed like Eden Marcellana.

Thank you for giving time and attention to my humble letter of appeal.

« PAKISTAN: The Long March against disappearances and extrajudicial killings in Balochistan commences

PAKISTAN: A reflection on peace talks with the Taliban  »