The year 2016 has proved to be a difficult year in terms of food and livelihood security for the poor and marginalized communities across Asia. There have even been reverses in food security of the people in countries like Sri Lanka. The year witnessed increasing attacks on urban poor, most glaringly in the Philippines but also across Asia, including in India, Pakistan, Bangladesh, and Indonesia. It also saw reversal or dilution of several hard-won legislations for ensuring and promoting food security, the poor in India being the worst hit. The year has also witnessed several other upheavals of all kinds, from political to natural; these upheavals unfortunately compromised endeavours to enhance food security of the communities.

One of the worst things to happen to the struggle for food security in the region in recent times, however, is increasingly hostility of the governments to human right defenders (HRDs). With new governments consolidating themselves, human rights work has been hit hard by exceedingly intimidating crackdowns by the states of Bangladesh, India, and the Philippines. All these countries have seen HRDs getting framed in fabricated cases, arrested, and, in a few cases, even tortured. The year also witnessed authorities hounding many non-government organizations, often cancelling their licenses and stopping them from receiving funding on the flimsiest of grounds; the crackdown has been particularly severe in India with a partner organization of the Asian Human Rights Commission documenting over 400 criminal cases being slapped on its members by authorities in Odisha, a province in Eastern India. The Philippines State has displayed similar actions.

The Global Hunger Index Report, 2016, of the International Food Policy Research Institute, and Concern Worldwide, reflects the trends of the year. The Report notes that despite progresses made, levels of hunger remain alarming in 50 countries, many of them in Asia. A closer look betrays that the level of hungers seems to be unrelated to “economic growth” levels of the countries, and thus indicates a widening gap between the food security status of mainstream and poor / marginalized communities.

Take, for instance, India’s ranking of 97 out of total 118 countries. It has fared worse in eliminating hunger than all of its neighbours, sans Pakistan (ranked 107). Even Nepal, a poor country devastated by an earthquake in April 2015 ranks far better at 72, as do countries like Myanmar (75), Sri Lanka (84), and Bangladesh (90). That all of them, barring China, have the same level of hunger (serious) may be consolation for the government of India, but not for the poor who go hungry.

Sri Lanka gives another example of political stability not translating into lowering food insecurity of vulnerable populations, with both the hunger levels in the country and its rank worsening when compared to 2015! Sri Lanka ranked 69th in 2015 as against 84th this year. The following table gives an idea of the hunger situation in the countries where the AHRC works directly:

The table demonstrates the extent of hunger in Asia as well as the variations in the priorities of the governments to eradicate the same. What it does not showcase is of course how the statistical percentage points gets translated into whopping numbers of real people suffering on the ground. What it also missed is that most of the countries in the region have the means to alleviate hunger altogether.

For example, United Nations Development Programme observed in its Human Development Report, 2015, that India can provide “a basic and modest set of social security guarantees for all citizens with universal pension, basic health care, child benefits and employment schemes”.

As against this meagre sum required, a UNICEF study found out that government of India’s expenditure on health care for children has ranged from 0.28 to 0.31 percent of total expenditure between 2001-02 and 2014-05. The trend has continued in recent years with the incumbent government slashing health budget by a whopping 20 percent and exposing 63 million Indians to face poverty every year, as the government’s draft National Health Policy, 2015 itself notes.

This happened simultaneously with India’s increasing Non Performing Assets (NPA),  a euphemism for loans taken by the corporations and other bigwigs and never paid back. Face the figures: Indian bank NPAs grew from Rs 53,917 crore in September 2008 to Rs 3,41,641 crore in September 2015, i.e. much more than India spends on its social sector.

Other countries in the region are not doing much better. For example, on health, Pakistan spent a mere 0.9 percent of its total GDP in 2014, Bangladesh 0.8, the Philippines 1.6, Cambodia 1.3, Indonesia 1.1. Though Nepal and Sri Lanka outperformed the region with 2.3 and 2.0 percent respectively, they too left a lot to be desired.

The answer to why countries did not spend such a meagre amount of their GDP to achieving something this important and basic shows why hunger still persists in the countries. Ironically, spending on eradication of hunger and ensuring basic social security for the population is no dole or favour done to the poor. It is, quite on the contrary, an investment that brings massive gains for the economy by building an efficient work force and obliterating the prohibitive costs that hunger inflicts on the economy in terms of lost human resources, health, and other expenditures.

To put it simply, a massive section of the population exposed to chronic hunger upsets the ‘demographic dividend’ that political leaders of these countries keep exhorting about. Having a frail, hungry, and unhealthy workforce is not that much different from not having a workforce at all. 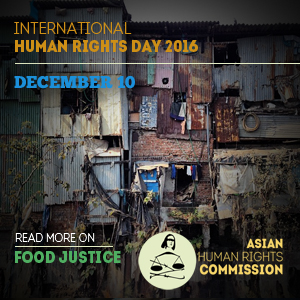 One basic reason behind many of the countries in the region failing to take concrete steps for eradicating hunger is the lack of the very idea of justice, which is in turn rooted in the idea of citizenship in the region. Despite their democratic façades, most of the countries in the region operate exactly like their colonial (feudal in Nepal’s case) predecessors and still treat majority of their populations as dispensable natives devoid of rights. They show callous disregard for the rights of their citizen, which inalienably include the right to life with dignity, something impossible for those exposed to chronic hunger.

Sadly, the simultaneous lack of a functioning justice system in these states denies the discriminated against section of the citizenry the opportunity to seek redress. It forces them into continuing with their dehumanized existence, hungry, stunted, and wasted.

In fact, completely defunct public institutions just pretending to be functioning is one commonality among all the countries which have failed to arrest hunger and starvation. This denies, as noted earlier, their hungry citizenry of any attempt at seeking redress. The rot in the public institutions of these countries runs too deep; their social welfare institutions remain, generally, so frustratingly corrupt and inefficient that almost nothing reaches the poor and is lost to vested interests entrenched deep in the system.

The judicial institutions, overcrowded, overburdened, understaffed, underfunded, and often corrupt, complete the vicious cycle of denial of justice to the violated people. Gary Haugen and Victor Boutros brilliantly summarize the end result in their book, The Locust Effect. They say countries remain stuck in the cycle of poverty because of the failure of the justice system, law enforcement, and the government in saving the poor from day to day violence, slavery, or forced labour. Governments, and the world community, might have a thousand schemes ready to fight hunger. However, if the governments are really interested in ending hunger and poverty, they need to provide mechanisms of deterrence, on the ground, fighting the bullies, be they State or non-State actors, who inflict violence on the poor and marginalised and thereby keep them in cycles of poverty and hunger. The mechanisms of deterrence are none other than functioning justice systems, treating everyone as equal and operating to punish criminals swiftly, and ultimately providing redress to victims of injustice.

A social justice bench of the Supreme Court of India, comprising justices Madan B. Lokur and U.U. Lalit, summed up the problem in September 2015 while criticizing the Government of India over the “mismatch” between “wonderful schemes” it creates and their woeful implementation, leaving ground realities unchanged.

This mismatch, between plenty of schemes, acts, and promises to fight hunger with abysmal implementation, without financing and monitoring, is the basic reason behind continuing hunger, not only in India but also in the whole region. Sadly, the problem will not be addressed even if the funding crisis is resolved, as there would still not be functioning public institutions delivering the benefits without pilferage, leaks, and outright loot, due to corruption that is endemic in the region.