The anti-Constitution protests that started before the promulgation of the Constitution on 20 September 2015 continued in early 2016. Instead of increasing meaningful discussions, the government tried to supersede the impasse by continuing with ruthless witch-hunting of Madhesi protesters and bystanders.

The government has not discarded its killing attitude; and protests and killings were still a near daily occurrence in the Terai Region in early 2016. The conflict boiled in August 2015, and since then life for people in the region has been upended. More than 57 people, including police and children have been killed in the violence in 2015. Meetings between top leaders from the 3 main political parties and the Madhesi leadership have all been fruitless. The government has appeared not to be serious about addressing the real issues.

The continued Madhesi-hunting spree showed that the then Prime Minister K.P. Oli led government had been engaging in a political vendetta against Madhesi leaders and cadres. Unlawful arrests were being used for social control in Nepal’s Southern Plains.

Although the agitating parties were about to sign a deal with the government, following positive developments during negotiations, the government side itself once again disturbed the environment. Agitating communities have perceived the incident as a conspiracy to stop the Constitution amendment process in line with their demands, and as reflective of the government’s desire to forcefully push its own earlier amendment proposal.

In the name of maintaining law and order in the southern belt, the police began arresting whoever came into their sight and the Madhesi citizenry started escaping to India to avoid being arrested and extra-judicially killed by security forces, particularly the police. The State response has appeared politically motivated, with State institutions conspiring to discourage peaceful and constructive political activities in Terai.

No one should escape from criminal liabilities; zero tolerance of impunity should be strongly enforced. However, the security forces have been manipulating the criminal investigation system to target certain political or ethnic groups. Evidence-based criminal investigation should take place, not the politically motivated trend of including a large number of names in the First Information Report (FIR) and then issuing arrest warrants like in the case of Assistant Sub-Inspector Thaman B.K.’s killing. Fair trial, which is a fundamental aspect of human rights, has been trampled upon in Nepal’s Terai.

The only progress in 2016 was the registration of complaints of human rights violations that occurred during Nepal’s conflict period, 1996-2006. Wiping out earlier estimations of violation records, by September 2016, more than 59,000 complaints relating to wartime abuses were registered against the Maoists, the then rebel forces, and the government security forces, including the police and the army. The transitional justice bodies were formed in February 2015, and have a two-year mandate, with the possibility of one-year extension, to take up criminal cases from the Maoist insurgency period.

The political parties have ganged up to undermine the ongoing transitional justice process, to flout the verdict of the Supreme Court of Nepal, find ways for those involved in crimes committed in the conflict period to be given amnesty, and ignore the voices of conflict victims and the national and international human rights community. 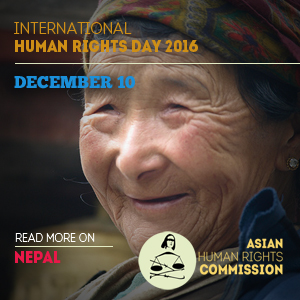 The transitional justice process has been driven by politics and controlled by alleged perpetrators from political parties and security forces, and this has been visibly reflected in the work of the Truth and Reconciliation Commission (TRC), and Commission of Investigation on Enforced Disappeared Persons (CIEDP). Since there is no protection programme for witnesses and victims, they are increasingly subject to threats from politically well-connected perpetrators.

In the current political context, the transitional justice process is nothing but a tooth that cannot and does not bite; it has been established as a facade. Members of the TRC are political appointees; they are certain to serve the interests of their political masters. It would be tragic if the transitional justice mechanism fails to address issues related to the serious human rights violations and chooses to ignore their mandate, by bowing to political manipulation and security interventions against victims’ right to truth and justice.

In this process, in 2016, Ganga Maya Adhikari and her late husband Nanda Prasad Adhikari, famously known as the Adhikari couple, must not be forgotten. Ganga Maya has been staging her protest and has been seeking justice for a long time, demanding action against the murderers of their son Krishna Prasad, who was allegedly killed by Maoist cadres at Bakulahar Chowk of Ratnanagar, Chitwan District, in June 2004. But the State is not willing to address the fundamental problem.

Nanda Prasad had registered complaints against three of the accused on 7 June 2004, and Krishna’s brother Noor Prasad had filed another complaint against 11 others. The Adhikari couple had been on fast-unto-death since 23 October 2013. Nanda Prasad died at the Bir Hospital on 22 September 2014 while on hunger strike. Nanda Prasad’s body has been kept at the T.U. Teaching Hospital morgue, as their other son, Noor Prasad, has refused to perform the last rites of his father. Nanda Prasad’s death was the first time in the country that a person died during hunger strike demanding justice.

This is the ultimate sacrifice parents can make to seek justice for their murdered son. The government must still wake up to take this case seriously, or else Ganga Maya may also succumb to the same fate.

When citizens die during the course of seeking justice, and more are on deathbeds, sheer negligence of the State showcases a virtual statelessness. Even late Nanda Prasad’s decomposing body is witnessing politicalized injustice and is still awaiting justice.

The Nepalese Police, not ones to be left behind, became more notorious in 2016. The police are often accused of being corrupt and of conniving with criminals. The nexus is even stronger amongst the politicians. It is hard to differentiate politicians from criminals and criminals from politicians in Nepal. There is a well-established nexus of money, muscle, mafia, and political power, which is difficult to dismantle. Politicians force police officers to obey their illegitimate orders, and those who resist are transferred immediately. Even officers who want to maintain law and order face corrupt politicians.

The police have devised new strategies to divert attention of national and international public. As cases of torture and extrajudicial executions have increased and become known to the public due to wider use of social media, the police have started making arrests without any arrest warrants and started illegally detaining people without providing detention notes.

The Asian Human Rights Commission (AHRC) has also learned that police have been using co-detainees to torture other detainees to escape blame of torture in custody. Torture is included as a gross violation of human rights in Nepal’s Constitution, 2015, but Nepal has yet to enact a law criminalizing torture. The police may have felt smarter by making detainees torture each other, but this kind of practice is still inhuman and something for which the police cannot be allowed to escape responsibility.

The police claimed to have received direct orders from the Police Headquarters not to permit any one to meet detainees. Due to this situation, incidents of illegal arrests, illegal detention, and torture are not being reported. Sub article 2 of Article 20 of Nepal’s Constitution, 2015, provides for lawyers to visit detainees immediately after their arrest. However, the Nepal police have been clearly infringing this constitutional provision, which is a serious offence. They have been illegally detaining civilians for 20 to 35 days without registering a case, and without presenting reasonable grounds.

The Judiciary has showcased its own set of problems in Nepal. More than 25,000 cases are pending at the Supreme Court. The Chief Justice is for the first time a woman, which is an achievement when it comes to gender rights; however, she has found her space in media headlines making anti-women statements against Madhesi women. She made such comments during her cordial visit to a temple in Saptari District. How can a Chief Justice fall to this level, a place from where it is hard to believe that she and her court stand for justice?

In Nepal, laws are often enacted to appease national and international actors. So far, Nepal has not created a favorable environment where laws can work freely and effectively. From circulation to implementation, the government is simply unable to cope.

The role of the government has been limited to formulating policies it cannot implement, making promises it cannot fulfill, and trading hopes that cannot be materialized, resulting in an absence of rule of law and bad governance in Nepal. Laws are required, but not before reforms in justice institutions are initiated, including the police. Nepal needs to formulate robust systems with investments and resources, before laws can be effectively implemented.

Nepal missed a golden opportunity to correct decades of mistakes in 2016. It left victims of conflict, humanitarian crisis, and disadvantaged communities like Dalits, Madhesis, and Tharus in the lurch, and missed the opportunity to rebuild homes, rebuild lives of the people, and, moreover, rebuild justice institutions by fundamentally redesigning them.