SRI LANKA: Aspirations to justice defeated at all level

It has come to a point that it is no longer possible to obtain justice for any kind of human rights abuse in which the State officers, including the security officers are involved. The awareness that such impunity exists has itself become an encouragement for violations of people’s rights throughout the country. Wounded by such abuse, when the people go to courts, in almost all the instances they are defeated. The entire justice system is so arranged to defeat the aspirations of the people for justice. 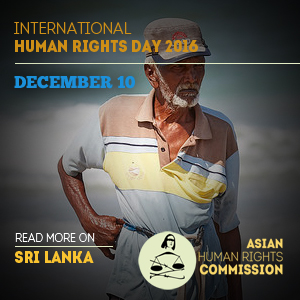 The delay in the system of adjudication is a sword hanging on the neck of every citizen who seeks justice. A person who goes to seek justice after having suffered a serious form of injustice is made to go around the circle in the court system for years and years at the end of which there is very little to expect, except the rejection of the demands that he or she has made from the system to give him or her justice. The political system benefits from this system of injustice and it will not be possible at all to make the political system function in any efficient manner for the benefit of the people so long as such a system exists.

In the past, the Asian Human Rights Commission has published details of cases, constantly, in order to illustrate how human rights of the people are abused and also how, at the end, the victim who seeks justice is humiliated and frustrated by the very system that is supposed to give justice.

On the occasion of Human Rights Day, 2016, the Asian Human Rights Commission is publishing a report on the failed justice system in Sri Lanka so that this issue – of the utter lack of possibility of gaining respect for human rights – can become a matter of public discussion, locally and internationally. 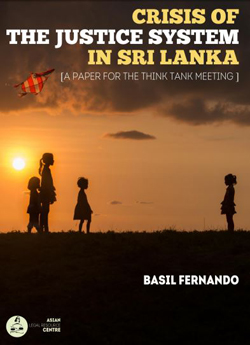 There is no future possibility of respect for human rights and justice within Sri Lanka so long as the fundamental reform of the justice system is not undertaken. However the political system that benefits from the system of injustice that remains in the country will not lift a finger to reform this system.

The least that can be done is to leave a record of this enormous system of injustice that remains within the country. Therefore, we publish this Report titled Crisis of the Justice System in Sri Lanka and call upon everyone with any decency and a desire for a change to reflect on this problem.