The Asian Human Rights Commission (AHRC) is concerned about the state of freedom of expression in Burma, at a time when Burma is awash in election campaigns. Rather than allow for the people to air their opinions as befits a democratizing nation, the government has chosen to suppress freedom of expression and Internet freedom and arrest citizens without just cause.

On 6 October 2015, a Facebook user named Zaw Myo Nyunt was arrested. A case has been filed against him under Section 66(d) of the Telecommunications Law. He faces up to 3 years in prison over a photo. He allegedly shared a photo on social media of someone stepping on the photo of Senior General Min Aung Hlaing, Commander-in-Chief of Defence Services. The arrests in relation to this photo did not stop there. Another Facebook user, Patrick Kun Jaa Lee, husband of a women’s rights activist, shared the same photo with his comment. He too was arrested, on 14 October 2015. He was told that a higher military official had filed a case against him under Section 66(d) of the Telecommunications Law. 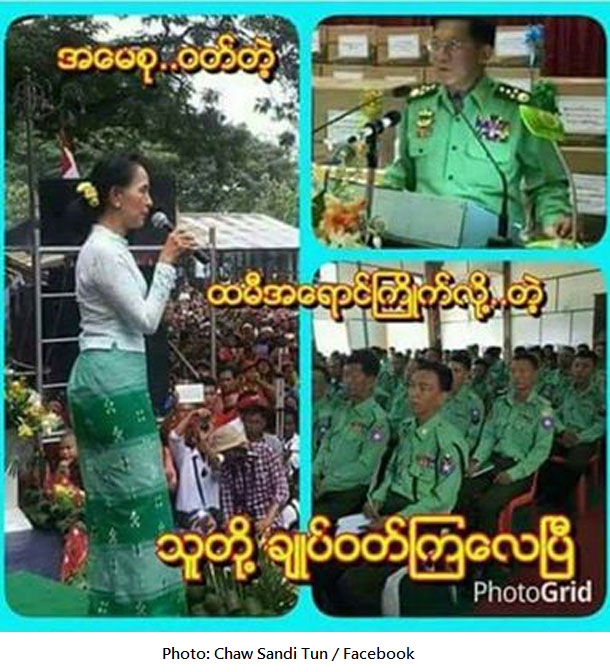 Another citizen arrested is Chaw Sandi Tun, a former member of Maubin District Student Union. She has been sued for similar reasons on October 12. Lt. Col KyawHtin of the Southwest Command in Pathein, an Army general staff officer, has fileda case against her under Article 34(d) of the Electronic Transactions Law in Maubin Township Police Station. Article 34(d) carries penalties of up to 3 years in prison and proscribes using electronic technology to lower the dignity of any organization or person. Chaw Sandi Tun shared a digitally edited photograph which seeks to compare the NLD party leader Aung San Su htamein (traditional skirt) color with the newly introduced military uniform, and added a comment. She has been detained in Maubin Prison and is awaiting her first court hearing this month, October 27.

Earlier this month, President’s Office Director Zaw Htay, warned poet Mg Saung Kha that legal action shall be taken over a poem shared on social media. Although he didn’t mention any name or country, in the poem Mg Saung Kha ridicules “Mr. President”. The authorities have since been closely watching his house; the poet thus could no longer dare to stay in his own house, and has taken shelter elsewhere.

The government’s decisions to take action only against supporters of the opposition party, National League for Democracy Party (NLD), have given the Burmese community cause for concern. Over a period of time, supporters of the most powerful parties, ruling party Union Solidarity and Development Party (USDP) and the NLD party, have been mocking each other on social media. The opposition party hasn’t filed any lawsuit so far. Notably, a military official filing cases in this manner is not in accordance with law. In such criminal cases, the aggrieved person himself or herself must file the cases; none of these cases have been filed by those who have been allegedly ridiculed or mocked.

Furthermore, a freelance photographer, Aung Nay Myo, who photographed a rally of trishaw drivers supporting the NLD party, has seen a case lodged against him under Article 18 of the Peaceful Assembly and Procession Act. Having been attacked, interrupted, and stopped from campaigning in some areas, NLD candidates have faced difficulties in the lead up to the elections.

The total number of the seats will be up to 1,171 for the November election. Exactly 330 out of 440 seats for the House of Representatives [Pyithu Hluttaw] and 168 out of 224 seats for the House of Nationalists [Amyotha Hluttaw] are going to be elected; 25 percent seats of both houses will be reserved for military representatives. And, the remaining 673 seats will be for seats in the seven states and seven regional legislatures, including 29 reserved for ethnic affairs representatives. The parties have been campaigning across the country since 8 September 2015.

The Asian Human Rights Commission is also concerned about the errors in eligible voters’ lists, despite corrections by the Union Election Commission (UEC) and voters themselves having been made. The UEC must be transparent during the process of polling, counting, and in election dispute resolution.

That the authorities have made many politically motivated arrests in recent months is not a positive sign. Therefore, the AHRC calls for the international community to closely watch the unfolding situation right up to the upcoming Election Day. The AHRC also calls on to the Burmese government to release the detainees arrested due to politically motivated reasons immediately and cooperate with the international observers to hold a free and fair election.