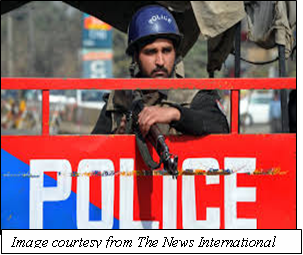 Could it be that the relentless endeavour of civil society, NGOs, and human rights defenders has finally begun to bear fruit?

On, 20 August 2015, the Supreme Court has directed the federal and provincial governments to submit recommendations on police reforms.

Reports in The News International and The Frontier Post on August 20, have quoted Supreme Court Chief Justice Jawwad S. Khawaja as stating, “the police are the biggest problem for the people of Pakistan. If the police are corrected, everything will become correct”. All three judges quoted argue for the need for police reforms.

Justice Dost Mohammad Khan reportedly said, “If any police office is involved in any crime, his fellow policeman declares him innocent within 3 days and frees him. We will have to introduce reforms in police on the pattern of Scotland Yard.”

The same reports suggest that, Sarwar Khan, Secretary Law and Justice Commission, presented a “detailed report in the court with reference to police reforms and other matters”.

None can deny the need of a complete overhaul. The Corruption Perception Index (CPI) each year shows the police to be the most corrupt institution in Pakistan. There is no sign of improvement. A lack of political will is an underlying reason why police reforms have not been enacted; the political parties treat the police force as their private guards and/or mercenaries to settle scores with political opponents. A demoralized police and prosecution often drag their feet when it comes to investigation. The victim reporting the crime is the first suspect the police interrogate. The interrogation begins with the victim, adding insult to injury, the modus operandi of the police officials, who make it a point to subject the poor victim to mental torture. Rape victims are a prime example of such treatment.

In societies where the police are corrupt and inefficient, absence of the rule of law and chaos are expected. History shows that fair policing practices strengthen democracy and improve the image of countries. The Supreme Court of Pakistan has taken initiative and must be supported by all proponents of police reforms seeking an end to the thana culture that perpetuates custodial torture.

In Pakistan, the police were principally designed to meet colonial needs, and to date their main purpose is to safeguard the powerful and maintain the status quo. As police are the first step in any criminal justice proceeding, without reforming policing first, overhauling of the criminal justice system will remain a distant dream.

In 1947, Pakistan inherited a more-than-eighty-year-old police system from the British. The system was designed in 1861 to be a public frightening system. During the last 68 years, 21 commissions and committees have been mandated to recommend police reforms.

The police Act of 1861 was replaced with the Police Order, 2002, which came into effect on 14 August 2002. No efforts were made by the government to promulgate police reforms from 1947 to 2002. And, even the police order 2002 was unfortunately not implemented due to resistance from the police, bureaucracy, and political leadership.

Originally, the spirit behind the reforms initiated by Police Order, 2002, was to transform the police from a “force” into a “public service”. However, the order was significantly curtailed in its intended scope by amendments that were subsequently introduced between 2004 and 2007. While the original 2002 Order was aimed at depoliticizing the functioning of police throughout Pakistan, the subsequent amendments defeated the very purpose of reforms.

After the 18th Constitutional Amendment in 2010, police have formally become a provincial subject. Therefore, at present, amended Police Order 2002 is applicable in only two Provinces; Punjab and Khyber Pakhtunkhwa (KP), whereas the other two Provinces, Sindh and Baluchistan, have actually brought back the Police Act, 1861.

State dependence on the military to counter terrorism in urban centers is largely due to its failure to reform police. Outsourcing policing to other law enforcement agencies such as rangers and paramilitary agencies has proved to be counterproductive and a short-term solution to a problem created by lack of resources and training of police. It is a globally recognized fact that a state’s police play a pivotal role as the first line of defense against threats of terrorism and insurgencies. A study conducted by RAND Corporation, a nonprofit global policy think tank, titled “How Terrorist Groups End” stated that effective police and intelligence work, rather than the use of military force, deliver better counterterrorism results.

The civil society has time and again highlighted the need for police reforms and has actively participated in police training and sensitization of the police force towards the vulnerable faction of the society, such as women, children and minorities. However, unless the State takes active measures to introduce reforms, these efforts will go in vain. The civil society has realized that police training is not enough; structural changes will have to be made to make the police a people centric and public friendly organization.

The latest Directive of the Supreme Court might be the first step towards achieving police reform; it can be hoped that the State will take serious measures to implement one single Act to regulate the police institution and earnestly depoliticize the force to ensure transparency and accountability in the police force.

Image courtesy from The News International