The Asian Human Rights Commission (AHRC) has learned that the assassination 12 years ago, of prominent human rights activist, Munir Said Thalib, has passed without any progress being made. Munir was poisoned to death on 7 September 2004 on board a Garuda Indonesian flight from Jakarta to Amsterdam. Recently, some movement occurred when the court convicted Mr. Polycarpus Budihari Priyanto, a pilot of Garuda with 14 years in prison as well as an Intelligence Agency. However, before completing his total detention period, Polycarpus was released last year on parole ordered by the Minister of Law and Human Rights, Mr. Yasona Laoly. 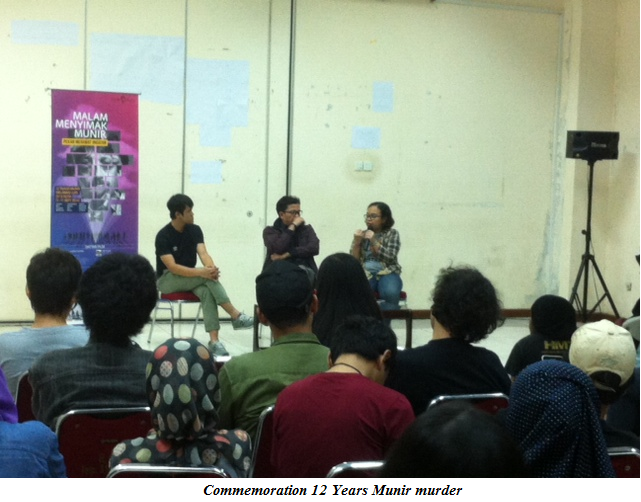 This month, Mrs. Suciwati, Munir’s widow, along with human rights groups, organized two campaigns of a movie screening and a public discussion. This was to commemorate the 12 years since Munir’s assassination. The two activities took place in the building of the Jakarta Legal Aid (LBH Jakarta) between 4 – 11 September 2016.

In the past two years since President Joko Widodo was inaugurated, he has made no effort to ensure continuation of the investigation and prosecution of Munir’s murder. Some recommendations were made in the Fact Finding Report (TPF) established by our previous President Susilo Bambang Yudhoyono in 2004 and 2005. President Widodo is reluctant to order the Chief of National Police to re-establish a special team for the case and to publish the Fact Finding Report.

In 2004, previous President Yudhoyono stated that the Munir case is test of our history. Little by little history has answered the test, wherein the government remains unwilling to solve the case. It means the slogan “Justice for Munir, Justice for All” remains elusive, making the real answer to be unjust. The public and the media believe that there is a conspiracy behind the Munir case led by the National Intelligence Agency (BIN).

We do believe that the Munir case is momentous for change and reform of the Intelligence Agency and the criminal justice system. This case can be a trigger to heighten public awareness of the weaknesses of the criminal justice system and government’s zero commitment to continue with reformation. Our Constitution (UUD) mandated this in 1945. It promulgated that the State of Indonesia shall be a state based on the rule of law with equality before the law for all which must be incorporated into everyday life.

Taking into consideration the serious defects of the criminal justice system, impunity and State negligence for justice seekers, the question becomes whether or not President Widodo is a real President and relevant today.

Why did the President promote the following retired but controversial persons to be ministers, such as Army General Wiranto as Coordinator Minister of Politics, Law and Security (Menkopolhukam) and Army General Ryamizard Ryacudu as Minister of Defense? Furthermore, the President has a very close relationship with retired Army General Hendropriyono, former head of the Intelligence Agency and named by the Fact Finding Team as allegedly involved in the Munir murder.

Therefore, we call on President Widodo to prove whether or not he is real president. Real presidents have power and authority from the Constitution and the Law. They have a duty of care to the country and its citizens. In particular they must serve the seekers of justice, eradicate impunity and repair the serious defects of the Indonesian criminal justice system. If no efforts are made, we will continue to ask whether or not President Widodo is a real President. Nobody can answer this question but the President himself. How will you answer this question, Mr. President? Please show us, and show the public as well as Munir’s children how to make “Justice for Munir, Justice for All” a reality.

« PAKISTAN: Suo motu action on massacre of lawyers must be independent and effective

INDONESIA: Charged with criminal defamation under the ITE and tagged on Facebook »