It is to the credit of some Buddhist monks that they have taken active role in extending support and protection to the Muslims victim to vicious attacks across Sri Lanka. The attacks began after the Secretary of BBS, Reverend Galagoda-Atte Gnanasara Thera, spoke at a recent meeting at Aluthgama. 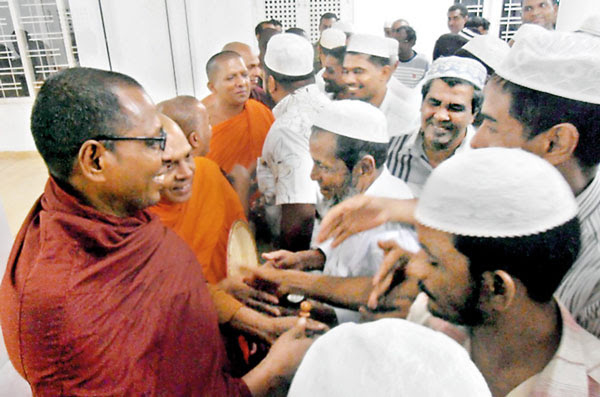 Video footage of the June 16th meeting shows this monk using provocative words and gestures, inciting violence against the Muslim community. In one instance, he sought a promise from the crowd that they would smash bags with Halal symbols on the ground. Referring to business premises belonging to Muslims, he threatened that such places would be at “our mercy” (“ape sarranay”).

The end of the meeting has been the beginning of ferocious attacks across Sri Lanka, sending thousands of Muslim men, women, and children to seek refuge outside their homes. Two incidents demonstrate the nature of the criminal acts of the attackers.

The UNP Member of Parliament Mr. Palitha Thewaraperruma has written about an attack he witnessed against elderly women, pregnant women, and children by a group of people who had swords and wooden poles in their hands. Had it not been for his active intervention, these women and children would have been killed, according to a statement posted on the MP’s Facebook account.

The statement details that among the victims was an elderly mother, a pregnant woman, and other women and children. After the MP took them into his van, the criminal gang attacked the van with stones, iron poles, and bottles filled with sand. The MP’s eyes were cut by broken glass. The van, which was a new one, was heavily damaged.

One of the children, an infant, was hit with a rock. The infant is now in a Colombo Hospital in critical condition. The mother has also suffered injuries after being hit with a sand-filled bottle. The MP has further stated that when all these violence was taking place, the police and the Special Task Force were standing nearby. In fact, they were aiding and abetting the criminal gangs, refusing to intervene to stop the crimes unfolding in front of their eyes.

Reverend Watareka Vijitha Thera, a monk who is a member of the local government in Mahiyangana, and the leader of Jathika Bala Senawa, has publicly expressed his opposition to Reverend Galagoda-Atte Gnanasara Thera and the provocative activities of the BBS. Last night, Reverend Watareka Vijitha Thera was abducted and beaten. This morning he was found near a bridge in the Bandaragama area and admitted to Panadura hospital. He has now been transferred to Colombo National Hospital for further treatment.

While the President of Sri Lanka has said that those responsible for violence would be dealt with, there is no indication that either Reverend Galagoda-Atte Gnanasara Thera or other individuals, who are the brains behind these organised attacks against Muslims, will be brought before the law.

It turns out the June 16th meeting is not the first time the Reverend has resorted to inflammatory public statements. Previous speeches of Gnanasara Thera demonstrate schemes to attack places of worship, business premises, and homes of Muslims.

The inaction of the police and the Special Task Force point to directions from above to aid and abet criminals engaged in violence and fail to carry out their duties. If the President is genuine about his promise of protection to the Muslim community, then it is his duty to arrest all those officers that aided and abetted this violence and who failed to carry out their duties as required by law.

It is evident that the BBS and its leadership are engaged in a plan to make Muslim businessmen leave their business premises and also to get Muslim residents to leave certain areas. The BBS has made it clear that all those who oppose them, including any Buddhist monks, will be dealt with severely. The attack on Reverend Watareka Vijitha Thera therefore comes as no surprise. 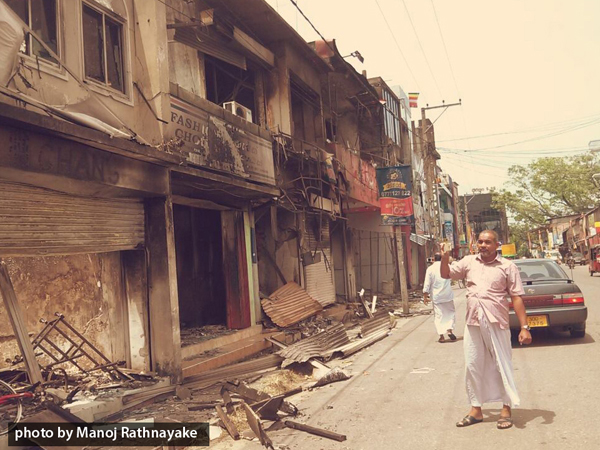 None other than the Minister of Justice has admitted the failure of the government to enforce the law and provide protection to the people. When a government lacks determination to stop violence, it encourages more violence, particularly when riots break out.

Under these circumstances, the leading Buddhist clergy of the country, which includes the Mahanayake Theros, should demonstrate their solidarity with the Muslims under attack and demonstrate moral courage by intervening to stop the violence. Some Buddhist monks have already intervened by visiting Muslim communities and indicating their opposition to these pogroms.

If the Mahanayake Theros were also to step out and visit the places where Muslim refugees have sought protection, it would be a clear indication of compassion towards all sections of Sri Lankan society.