Home / News / PAKISTAN: Children suffer for being the progeny of lesser gods

PAKISTAN: Children suffer for being the progeny of lesser gods

A wave of anxiety has gripped the most populated province of Punjab, following the kidnapping of more than 700 children within this past year.. Several areas in Punjab particularly Lahore, the capital city, has witnessed a sudden surge in child kidnappings. There have been reports of the dead bodies of missing children surfacing in deserted areas, with their organs missing. 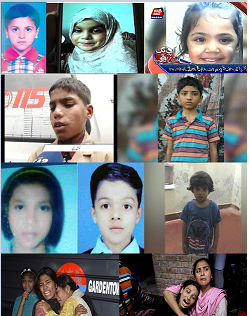 Incidents of missing children from Punjab have been on the rise recently. More than a dozen children went missing from the Badami baagh (garden) area of Lahore in the past few months. Recently a dead child was discovered in Lahore, who had reportedly been murdered after being tortured.

In the face of these incidents, the Punjab police unabashedly claim that most of these children were fleeing from domestic violence. In a rather controversial statement, the Inspector General of the Punjab Police, Mushtaq Ahmad Sukherha, had reportedly said that the kidnapping of children was not a serious issue. It had been wrongly portrayed by the media, as the majority of the children ran away from home due to the harsh attitudes of their parents. The astounding gravity of the matter failed to grab the attention of the state until a suo moto action by the acting chief justice was in order.

On August 3rd 2016 the Additional Inspector General (IG) Punjab province, Nadeem Nawaz, had submitted a report to the Supreme Court, after it began hearing suo moto cases of child kidnappings. According to the report, 766 children were kidnapped in Punjab in the past seven months. 715 children have been found and 52 cases are under investigation. The report also stated that the Police are working on complaints related to the sale of organs of kidnapped children in Gujrat and surrounding areas.

The court noted that despite the hue and cry raised by the parents of missing children, the police have failed to register the cases. When the state fails to protect the life and property of its citizens, then the judiciary has to intervene, the court added.

Ironically, the Deputy Inspector General (DIG) Operations, Lahore, Dr. Haider Ashraf, has rejected the reports that more than 700 children have been abducted from the province in recent days. Perhaps the respected DIG does not regard the kidnapping of a child of the poor worthy of investigation. Are these children suffering for being children of lesser gods? Is the protection of law a luxury that only those with deep pockets can afford? Is the state obliged to protect the life and liberty of the rich and influential? Sadly, in an elitist society like Pakistan, the answer to these difficult questions is an unapologetic “yes”.

There is utter disregard for international conventions. Article 6 of the Convention on the Rights of the Child and constitutional provisions safeguard the rights of the child. The state has turned a blind eye to the plight of the hapless parents who are unable to even register an FIR with the police. The state’s apathy is a blatant violation of the fundamental rights of life, liberty, safety and free movement.

There is mass hysteria amid the fear that the state has failed to protect its citizens. The inaction of the police to apprehend the criminals has caused people to mistrust the state apparatus to deal with the matter. They have resorted to mob justice. On August 1 a suspected kidnapper was caught and thrashed by a mob in the Ghaziabad neighborhood of Lahore. When the police arrived to control the situation and arrest the wrong doers the angry mob charged the police. The police officers fled.

Law enforcement agencies are groping in the dark to deal with these unscrupulous elements in the society. On the night of July 30, traffic wardens and Dolphin officials tortured a driver of the Edhi ambulance on suspicion of kidnapping. The driver was transporting 12 children recovered during a search operation of the police on the Edhi Home in the Gulberg area of Lahore.

Instead of formulating an effective strategy to curb the incidents of kidnapping, the police are busy trying to prove that 96 percent of the missing children ran off from their homes due to family conflicts and only four percent were abducted. Many of those abducted have reportedly been sexually abused.

According to the report on the State of Pakistan’s Children 2015, by the Society for the Protection of the Rights of the children (SPRC), 10 children are sexual abused in Pakistan every day. The total number of child sexual abuse cases stood at 3,768 cases in 2015 alone. It is obvious that the state of Pakistan has failed in its obligation to ensure the well being of its children. According to UNICEF, the country has remained off-track on 24 Millennium Development Goals (MDG) indicators, including those related to education, maternal health and infant mortality.

There has been an unprecedented rise in violence and crime against children and adolescent females in the last few years. Of the total population of Pakistan, 164.6 million children are below 19 years of age. They comprise more than half of the country’s total population. Considering the aftermath of lawlessness, violence, frustration and denial of their basic human rights to which the youth of Pakistan are subjected, can one possibly expect a better future for the nation?

Children in Pakistan are most vulnerable, prone to being beaten, sexually exploited, forced into bonded labor and murdered. Child sexual abuse in particular is crippling Pakistan and its future. Cases go unreported as the subject is taboo and attracts the wrath of the religious clergy. Sexual abuse is perceived as shameful. Hundreds of innocent children live their lives in the shadows, reliving memories and the trauma of their assaults.

There is no trust more sacred than the one the world holds with its children. There is no duty more important than ensuring that their rights are respected, that their welfare is protected, that their lives are free from fear and want and that they can grow up in peace. When the lives and the rights of children are at stake, there must be no silent witnesses. It is time that the state confronts the reality of the situation, rather than sweeping it under the rug.

The Asian Human Rights Commission urges the state of Pakistan to exercise its duty of care, by taking fool proof measures to ensure the safety and security of children. Furthermore, concrete measures must be put in place, to apprehend the criminals and administer exemplary punishment to those responsible for the kidnappings.

« PHILIPPINES: Human rights defender killed in Bataan due to her resistance to open coal storage