INDONESIA: Racism and assaults against indigenous Papuans ignored by government in Yogyakarta province 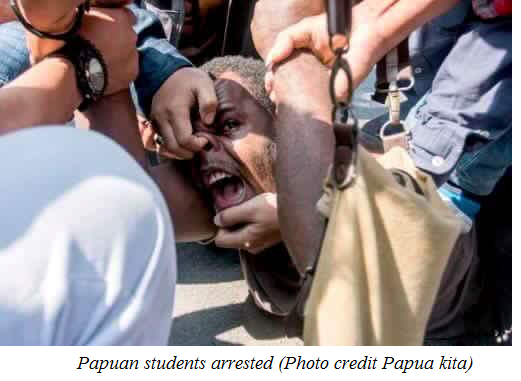 Since Friday morning, July 15, police officers have surrounded and forcibly closed the Papuan students’ dormitory. Inside there were approximately 100 Papuan students. The police did not allow access to the dormitory, rejecting local residents who tried to bring food to the students.

More or less four mass organizations, namely the Paksi Katon (which sees itself as a guardian of Javanese culture, the Yogyakarta sultanate – JB) and the Yogyakarta Militia (Laskar Jogja) and the Indonesian Veterans’ Children (FKPPI), the Pancasila Youth (PP) took action. They surrounded the dormitory, shouted racist words such as “monkey and separatists must leave Yogyakarta province.” They also assaulted the Papuan students. Ironically, the police officers who guarded the protest did not make any effort to stop the violence. According to some witnesses, the police came with four trucks and weapons, more than enough to prevent the assault. In fact the police did not protect the Papuans but arrested them.

Before being surrounded and blocked by police officers and four mass organizations, the Papuan students in Yogyakarta province, like many other Papuan students in other cities of Indonesia, planned to hold a peaceful public protest. They supported the United Liberation Movement for West Papua (ULMWP), becoming a full member of the Melanesian Spearhead Group (MSG). This is an inter-government organisation in the South Pacific comprising four Melanesian countries, namely Fiji, Papua New Guinea, the Solomon Islands and Vanuatu.

The AHRC has learned that there is not a good will in the government, particularly in the police, to deal with the organized, peaceful protest by the Papuan students. This case is added to a number of similar cases conducted by the Indonesian police against peaceful protest and peaceful assembly in Papua. Previously, the AHRC has documented and reported the illegal arrest of 2,300 indigenous Papuan students, during a peaceful protest in Papua-(the statement available here). The AHRC recently issued a statement based on the current human rights situation in Papua. President Joko Widodo has yet to make any improvements towards human rights protection for indigenous Papuans (see the statement here).

The AHRC believes that various human rights violations have occurred against indigenous Papuans. They are caused by the lack of national leadership, accountability of security forces, state apparatus and non-state actors. All of these intentionally committed human rights violations against indigenous Papuans. So far, the President does not show any serious intentions in evaluating the present military and police in Papua. How many military personnel are there in Papua? In the last ten years it has become a bigger question. This circumstance demonstrates that the President does not have effective control over the military and the police in Papua.

Since the political reform in 1998, after the dictator Soeharto stepped down, until the present, Indonesia has had five presidents. None of them showed any serious commitment to improve human rights protection for Papuans. An exception is former President Abdurrahman Wahind (known as Gus Dur). In 2001, he bravely changed the name of Irian Jaya province into Papua province. This was the original name before Indonesia took over the land from the Dutch colonials.

Recurrence of human rights violations against indigenous Papuans, in particular repressive approaches to peaceful assembly and freedom of opinion have proved that the government has failed. It has not guaranteed that its policy, apparatus and security forces are in line with international human rights instruments, to which Indonesia is a state party. An example is the International Covenant on Civil and Political Rights (ICCPR). The Indonesian Constitution (UUD 1945) very clearly guarantees the right to freedom of assembly and opinion.

The AHRC affirms that indigenous Papuans are entitled to peaceful assembly and freedom of opinion in all circumstances. The government and its subordinates, non-state actors, thugs, mass organization or paramilitary, cannot subjectively breach or offend these rights.

Therefore, the AHRC is calling for the Indonesian government to treat the indigenous Papuans equally with other Indonesian citizens. It must make certain that, discrimination, insults and assaults against indigenous Papuans are investigated and prosecuted in line with the standard of fair trial principles.

The government should consistently allow international journalists and other human rights missions to monitor the situation to ensure that the government is sincere in its desire to improve the standard of human rights protection in Papua.

« INDIA: Cycles of violence and revenge must end