INDONESIA: Lack of genuine policy and rights in Papua

After monitoring 20 months of the human rights situation in Papua and West Papua provinces under President Joko Widodo’s administration, the Asian Human Rights Commission (AHRC) is dismayed at the utter lack of progress in the protection and realization of people’s rights. Since President Widodo’s inauguration on 20 October 2014, there were considerable expectations for improvement in Indonesia’s human rights situation, particularly in Papua and West Papua. President Widodo was believed to have a strong commitment to addressing the various human rights violations in Papua, providing remedies for victims and families, and evaluating the presence of security forces in the province. Over a year of his presidency however, has neither resolved any of the past human rights violations, nor seen any adequate remedy and guarantee for non recurrence given to the victims. 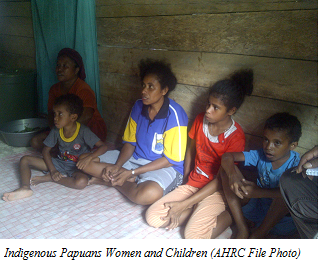 Law No. 21 of 2001 on special autonomy for Papua and West Papua province has yet to bring benefits to local indigenous Papuans. Similarly, government development of public infrastructure has an economic and business orientation rather than benefits for the local community. The government’s attempts to boost international investment to Papua and West Papua will likely see an increase in migration to the provinces from elsewhere in Indonesia, further fuelling local discontent.

Furthermore, criminal justice institutions in the provinces do not function to address human rights problems. The police are frequently involved in various human rights violations in the two provinces, and the accountability mechanism has failed to address this problem. The Paniai case of 8 December 2014, where four indigenous Papuan children were shot to death, two adults seriously injured, and 17 others injured (AHRC-UAC-089-2015) is an indicative example of the brutality faced by Papuans, as well as the lack of any effective investigation or remedies. Other cases that have also not been investigated and prosecuted under President Widodo’s administration include the case of a member of the Air Force heavily maltreating 22-year-old Amsal Marandof (AHRC-UAC-143-2015), the case of arbitrary arrest and torture of three indigenous Papuans on 27 August 2015 (AHRC-UAC-003-2016), and the case of the shooting and brutal attack on 10 indigenous Papuan youth conducted by police officers of Tigi Police Sector (AHRC-UAC-090-2015).

The AHRC has also observed the Indonesian government’s lack of willingness to deal with past human rights abuses in Papua and West Papua provinces. The investigation report of the National Commission on Human Rights (Komnas HAM) on the gross violations in Wasior Wamena Papua (2001 and 2003), for instance, has been sitting with the Attorney General for the past eight years, without any action taken by that office. In the allegations of genocide in the Central High Lands of Papua from 1977-1978 as well, although the AHRC submitted a report to Komnas HAM, as of yet there is no progress in the investigation. While Komnas HAM initiated establishing a team in November 2015 to audit human rights violations beginning from the integration of Papua to the Republic of Indonesia until the case of Tolikara (AHRC-UAC-106-2015, AHRC-UAU-002-2016), since then there has been no clear information on the team’s existence or work.

Recently, a government initiative under the Coordinator Minister of Politic and Security (Menkopolhukam), Mr. Luhut Binsar Panjaitan, was announced, to establish a special team dealing with human rights violations in Papua and West Papua provinces. Local human rights groups however, have largely rejected the initiative, saying that representative indigenous Papuans in the team are not genuinely representing indigenous Papuans on the ground. In fact, the initiative is typical of the government process to suddenly establish a team without proper consultation and discussion with Papuans on the ground. The government tends to simplify the problems in Papua, and its economic and infrastructure perspective on Papua does not seriously take into consideration the history of human rights violations occurring from the time of integration to the present.

The AHRC therefore calls for President Joko Widodo and his administration to take serious and comprehensive steps to deal with the various human rights problems facing Papua and West Papua provinces. The government should stop seeking political benefits in dealing with the provinces, and focus on improving the situation of the local communities. In particular, the government must guarantee protection of local indigenous Papuans, local human rights defenders and journalists, and consistently open Papua and West Papua to international monitors to ensure the progress of resolution.