Home / News / INDONESIA: Acts of torture not yet prosecuted as serious crimes

INDONESIA: Acts of torture not yet prosecuted as serious crimes 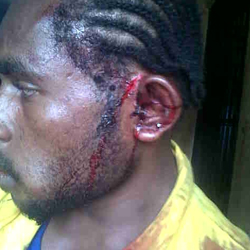 It has been 17 years since Indonesia ratified the Convention against Tortureand Other Cruel, Inhuman or Degrading Treatment, and promulgated Law No. 5 of 1998. However, the Convention has yet to be enforced in the domestic legal system. Indonesia still doesn’t have a national law that criminalizes torture and allows for prosecution of acts of torture as serious crimes.[ Mr. Yali Wenda, an indigenous Papuan victim of torture. (AHRC file Photo)]

For many years, the Asian Human Rights Commission (AHRC), along with its local partner in Indonesia, has been pushing the government to punish acts of torture, by revising the penal code and enforcing a law against torture. However, for more than a decade, the House of Representatives has been revising the Penal Code without making any significant progress. Moreover, the Bill against torture is also yet to be discussed in Parliament.

This circumstance allows torture and other cruel, inhuman, or degrading treatment to recur widely, and remain unpunished as serious crimes. The AHRC also notes that Indonesian courts do not take into account the existence of the Convention in court proceedings. Besides there being no national law to prosecute acts of torture, treating such acts as serious crimes, the nature of the internal accountability mechanism in the police and military has been problematic for many years.

Since it was separated from the Military in 2002, the police developed a system wherein every violation of law and human rights would be processed internally; a unit called provost and security (Propam) was designated to tackle such violations. However, victims and public do not have access to the workings of Propam, and due to lack of transparency, the mechanisms and the status of individual cases remain hidden.

Propam has authority to decide whether or not cases of police abuse constitute violation of criminal law on the one hand, and violation of police code of conduct (administrative sanction) on the other. This mechanism has been beset by a lack of transparency and accountability. In many cases, Propam has decided cases that allegedly constitute crime through the internal mechanism, and this has resulted in light punishment, such as suspension of rank promotion and salary. Therefore, this opaque internal police mechanism needs to be evaluated and strengthened to avoid impunity for perpetrators.

There are some related cases documented by the AHRC. For instance, there is the AHRC urgent appeal AHRC-UAC-065-2015 on torture that occurred in Samarinda, East Kalimantan Province, where nine police officers tortured to death a 16-years-old boy in 2011. Another example is that of the AHRC urgent appeal AHRC-UAC-057-2014 on torture against indigenous Papuans who participated in a peaceful demonstration; the police officer who committed the acts of torture remains unpunished.

The Military for its part is still using Law No. 31 of 1997 related to Military Courts, in which the law is set up to handle every violation or abuse conducted by Military personnel, regardless of whether the victims are civilians or the crime took place in a public area. Besides Law No. 31, the Military also has Law No. 25 of 2014 on Military Discipline and the Military Command Regulation No. 73/IX/2010 on the Prohibition of Torture.

The AHRC notes that the existent laws in the Military are not effective for punishing acts of torture conducted by Military personnel. The above-mentioned laws, in particular the law on Military Courts, need to be revised, because they tend to protect military personnel, and suffer from lack of transparency and accountability.

The AHRC also notes that in its concluding observations on the initial report of Indonesia’s compliance with the International Covenant on Civil and Political Rights, on 21 August 2013, the UN Human Rights Committee stated that the government of Indonesia must immediately revise its penal code, and enact a law against torture to prosecute and punish torture.

This year, on 25 and 26 June 2015, the AHRC, along with its local partner, the Commission for Disappearances and Victims of Violence (KontraS), a prominent national NGO, has organized in Jakarta a public event to campaign for the eradication of, and punishment for, torture. Mr. Yasonna Laoly, the Minister of Law and Human Rights, is attending the public event, as is a representative of the Police Headquarter. The public event aims to remind the government to reform its law mechanism and punish torture as a serious crime, providing remedies for victims.

In this statement, on the eve of the UN Day in support of the Victims of Torture, the AHRC would like to urge the government of Indonesia to:

Firstly, immediately, revise and enact a new penal code, which regulates torture as a serious crime. Acts of torture must be punished using a standard of fair trial and serious consideration needs to be given to the Convention against Torture.

Secondly, prioritize the drafting process of the Bill against torture. It is important the government shows its commitment to punish and eradicate torture in whatsoever condition it may exist. Whatever the perpetrator’s rank or position, he or she must be prosecuted.

Thirdly, revise the existent Law No. 31 of 1997 on Military Courts to ensure there is no impunity for Military personnel. The internal mechanism of the Military and the police needs to be audited to make it more accountable and in line with the Convention against Torture.

Fifthly, immediately, implement the recommendation of the Human Rights Committee to prosecute and punish torture.

THAILAND: A military regime that must go »