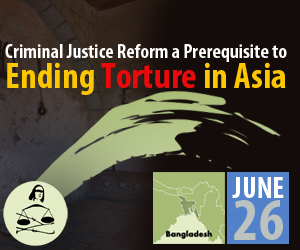 That torture is endemic to Bangladesh is not news to the human rights community, or to the millions of citizens who directly and indirectly suffer at the hands of law enforcement personnel. The enactment of the “Torture and Custodial Death (Prohibition) Act, 2013”, i.e. Act No. 50 of 2013, is acknowledgement of the widespread practice by the State itself.

It is unfortunate and telling that this anti-torture legislation is not being enforced to prevent torture and punish perpetrators for acts of inhumanity. Torture is synonymous with law-enforcement in Bangladesh, and this reality continues to exist for a rather simple reason: those holding power want the torturous system to persist. The government wants to be able to torture the people, and wishes that law enforcement are ever ready to do this bidding.

Anyone quizzical about the above should answer the following questions first:

These are not trick questions. And, the correct answers are no, no, and no. Ordinary lives experienced by Bangladeshis explain the why behind these answers.

Every police station in Bangladesh is a virtual industry producing torture-victims by the day with complete impunity for the torturers, state agents. However, levels of impunity have reached new heights, and there is also a new pattern of torture in Bangladesh.

The police and security personnel have taken to shooting the limbs of detainees point blank. More than a hundred victims have so far been identified whose legs have had to be amputated after police shot at their limbs in custody. In addition to the existing “chain of corruption”, the police in Bangladesh have established a new business of bribery: “Give money or get gun-shots to your legs”. It is a simple but effective business mantra and methodology for one of Bangladesh’s booming industries, unaffected by any external market conditions. That business is booming is reflected in the bribe amounts doing the rounds in police stations, barracks, and undisclosed detention centres.

Pro-opposition activists do not have any choice in this situation, as the government wants to teach them a “lesson” for being on the other side. The poor, who cannot afford to pay bribes, do not have a choice either. Very few, who have options to bargain and can afford paying up to the police, or have the capacity to influence powerful elites, can save their limbs. However, even the unharmed-limbs walk out of police stations with fabricated cases against their owners. And, being stuck in a torturous criminal justice system, even if one does not lose ones limbs, means agony and penury for a lifetime.

There is another reality facing the human rights movement in Bangladesh. Rights organisations or individual defenders that appear to be committed to fight against the existing situation are facing reprisal and closure of their activities, as part of systematic plan of the government. Rights organisations that do not want to face such a predicament either take the side of the ruling coalition or maintain silence despite the fact that the citizens are getting permanently disabled, and the numbers of the limbless is rising day by day.

The same applies to the lawyers who should be at the forefront, fighting for the upholding of law and rights, in any given jurisdiction. Ironically, most of the Bar Associations of Bangladesh are utterly unaware about the “Torture and Custodial Death (Prohibition) Act, 2013”. Human rights defenders learn about this blind spot when they communicate with members of the Bar Associations to seek legal remedies in cases of torture.

The Judiciary, for its part, remains quite happy to survive in the form of old buildings rather than functioning institutions. The judges wish to keep their jobs without judging with any integrity and providing justice to victims of torture. Apart from a valiant few, the media continues its “event reporting” when yet another person’s leg is amputated. The alarm that such repeated incidents of torture and violence should evince across the board is missing.

This is where Bangladesh stands today, on the eve of the UN International Day in support of the Victims of Torture, 2015. The country’s intelligentsia, if there is any such thing, are not able to see that each individual disabled so, symbolises a disabled criminal justice system, a disabled democracy, and a disabled rule of law. Collectively what the people have is a disabled nation. And, all this disability is the product of entrenched greed for undeserving political power, which wants a torturous law-enforcement system, coupled with a pliable public justice system in place to protect usurped power.

Bangladeshis do not like those who collaborate with their oppressors to commit crimes against their own people. History has shown this again and again. Currently, all Bangladeshis that are able but not working to change the entrenched torturous system are collaborators, ensuring continuity for an unjust system that tortures fellow citizens. Directly and indirectly the whole society is being traumatized as are new generations growing up into this reality.

INDONESIA: Acts of torture not yet prosecuted as serious crimes »