The Asian Human Rights Commission (AHRC) has received information regarding the arbitrary arrest and the torture of two Papuans participating in a peaceful protest. The protesters are reported to have been electrocuted and beaten while being transported to the Jayapura police station in a police truck. They have been forced to sign a falsified police investigation report and have been denied medical treatment and access to lawyers. 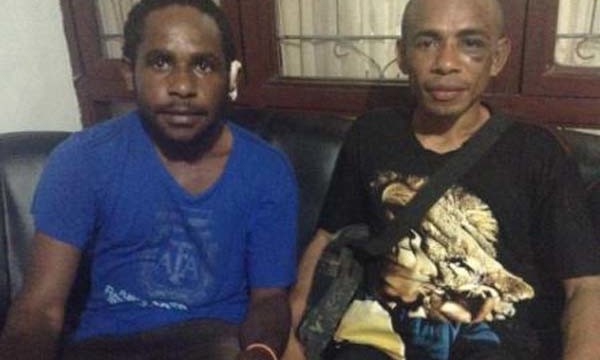 According to information gathered by London-based human rights organisation TAPOL, Alfares Kapisa and Yali Wenda were participating in a peaceful demonstration at Cendrawasih University on 2 April 2014. The protest was part of the Global Day of Action, demanding the release of 76 Papuan political prisoners.

Photo: Yali Wenda (left) and Alfares Kapisa (right) were arrested and tortured by Jayapura police officers for participating in a protest calling for the release of Papuan political prisoners. Courtesy of Tabloid Jubi)

At around 10.20 a.m., the protesters were about to march to join other protesters at Abepura. The police, however, blocked them from doing so and asked the protesters to disperse. The protesters refused the order and sent Alfares Kapisa, who is the field coordinator of the demonstration, as well as Yali Wenda, who delivered a speech during the protest, to negotiate with the police. The police, however, arrested them for no reason, beat them, and threw them into the police truck. Yali Wenda informed TAPOL that he and Alfares were held in the truck for about one and a half hours, where they were beaten in various parts of their bodies, kicked, trampled on, and electrocuted using electric stun batons. The police also reportedly stamped on Yali’s wounded foot. Alfares told local newspaper Tabloid Jubi there were about 10 police officers who beat them.

At Jayapura district police station, Yali and Alfares were put in a cell. They were ordered to take off their clothes which were by then covered with blood. They were given other clothes while those covered with blood were being washed. A doctor entered their cell to clean their wounds and to stitch up Yali Wenda’s ear. The stitching was performed without anaesthetic.
Following the torture, Alfares told TAPOL that he thought his ribs might be broken and that it was very painful for him to sit down.

At 7.30 p.m, the same day, lawyer Olga Hamadi of the Commission for the Disappeared and Victims of Violence (KontraS) and Pastor Dora Balubun visited Jayapura district police station and requested to meet with Alfares Kapisa and Yali Wenda. They were not given permission to see any of the arrested and tortured protesters. Another Papuan human rights lawyer, Gustaf Kawer, contacted the Chief of Jayapura District Police, Alfred Papare, requesting permission to meet the protesters but his request was also denied. At 9 a.m. the following day, 3 April 2014, lawyer Ivon Tetjuari demanded a meeting with the protesters. She was also refused permission.

On the same morning, between 8 to 11 a.m., Alfares and Yali were interrogated and asked to sign a falsified police investigation report. The report states that neither Alfares nor Yali was beaten and that both of them had attacked the police. Against their will, they were made to sign a statement, which implied that they would not hold demonstrations in the future.

They were released that afternoon and taken to Dian Harapan hospital for medical treatment. However, the hospital refused to provide them with a medical report unless they provided a letter from the police. Having been held captive and tortured, Alfares and Yali were reluctant to obtain such a letter from the Jayapura district police. The following day, lawyer Olga Hamadi of KontraS also made a request to the hospital for a medical report to no avail.

Freedom of expression is disproportionately restricted in West Papua. International journalists are forbidden by the Indonesian government to enter the region and demonstrations are often violently dispersed. A peaceful protest commemorating the International Day of Democracy last year, for instance, ended with the arrest of 71 protesters. Previously, in a peaceful protest on 1 May 2013 in Sorong, the Indonesian security forces shot two Papuan protesters to death and injured three others. The Indonesian government admitted the restriction on freedom of expression in West Papua during the UN Human Rights Committee’s session on Indonesia last year. However, the government insisted that they would continue to stop peaceful expressions of political views that aim to separate Papua from Indonesia by means of criminal charges.

Torture is commonly practiced by state officials in West Papua. The AHRC has earlier reported, for example, the torture of Nahor Stefanus Yalak in September 2013. He was beaten and kicked in various parts of his body by police and military officials.

Torture is yet to be criminalised in Indonesia, despite the country’s ratification of the UN Convention against Torture in May 1998. Perpetrators are not usually brought before criminal court. On the rare occasion when a perpetrator is tried, punishments imposed are typically lenient. In a recent torture case in West Sumatra, the judges granted probation to two prison guards who beat and electrocuted an inmate.

Please write to the listed authorities below, asking them to ensure that the allegation of torture against Alfares Kapisa and Yali Wenda is investigated. The police officers responsible for the torture should be tried in a criminal court and punished with adequate sentence which reflect the abuses they have perpetrated.

I am writing to voice my concern regarding the arbitrary arrest and the torture of Alfares Kapisa and Yali Wenda, two university students participating in a peaceful protest at Cendrawasih University in Jayapura, West Papua.

According to credible information I have received, on the morning of 2 April 2014, students of Cendrawasih University gathered to hold a protest demanding the release of 76 Papuan political prisoners. They were about to march to Abepura to join other protesters, when their path was blocked by the police. Three trucks of Jayapura Crowd Control police, three trucks of the police Mobile Brigades, a water cannon, and a barracuda tank were deployed. The protesters refused the police order to disperse themselves. Instead, they sent Alfares Kapisa – the field coordinator of the protest – as well as Yali Wenda, who delivered a speech during the protest, to negotiate with the police. Instead of negotiating with the representatives, the police arrested and beat them.

Yali Wenda informed London-based human rights organisation TAPOL that he and Alfares were held in the truck for about one and a half hours, where they were beaten in various parts of their bodies, kicked, trampled on, and electrocuted using electric stun batons. The police also stamped on Yali’s wounded foot. Local newspaper Tabloid Jubi reported that, according to Alfares, there were about 10 police officers torturing him and Yali.

Both Alfares and Yali were later taken to Jayapura district police station where they were put in a cell and ordered to change their blood stained clothes. A doctor came to the cell to clean the wounds and to stitch Yali’s torn ear without using anaesthetic. Later in the evening, a lawyer of the Commission for the Disappeared and the Victims of Violence Papua (KontraS Papua), Olga Hamadi, as well as Pastor Dora Balubun, visited the police station and requested to see the students. Their request, however, was refused. Two other lawyers contacted the police, demanding to meet with Alfares and Yali but their efforts were equally unfruitful.

In the morning of 3 April 2014, Alfares and Yali were interrogated and forced to sign a falsified police investigation report. The report indicates that they had not been tortured and that they have attacked the police during the demonstration. Alfares and Yali were also made to sign a statement mentioning that they will not hold more demonstrations in the future. They were released in the afternoon of the same day and were taken to Dian Harapan hospital for medical treatment. The hospital, however, refused to provide Alfares and Yali with their medical reports. It required the tortured protesters to firstly obtain an official letter from the Jayapura district police, i.e. from those responsible for their detention and torture.

I note with concern that freedom of expression is unreasonably restricted in West Papua and that torture is commonly practised by state officials in the area. This case unfortunately reflects the severity of violations both to the rights to freedom from torture and to freedom of expression, which are guaranteed under the 1945 Constitution and the international human rights instruments ratified by Indonesia. Such instruments, including the International Covenant on Civil and Political Rights (ICCPR), oblige Indonesia to provide effective remedies to the victims of human rights violations, as stipulated in Article 2 (3) of the Covenant.

I am therefore calling on you to ensure that the allegations of torture of Alfares Kapisa and Yali Wenda are impartially and effectively investigated. The police officers responsible for the abuse should be tried in a criminal court and punished adequately. Other civil investigations should complement, and not substitute, such criminal proceedings. Medical treatment of both Alfares and Yali should also be covered at the expense of the state.

I look forward to receiving your swift and positive response in this matter.