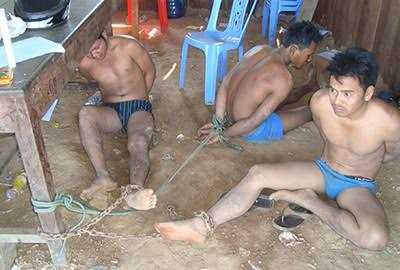 June 26 is observed as the international day in support of victims of torture. Torture is a crime under international law, just as is slavery and genocide. When committed as part of a widespread or systematic attack against any civilian population, with knowledge of the attack, torture also qualifies as a crime against humanity.

Torture is widespread in India. Every day cases of torture are reported in India, from police stations, and other sites of state custody. India does not have a law that criminalises torture. While criminalising torture is important, it is equally relevant to ask the question: will criminalisation help end the practice?

The Asian Human Rights Commission (AHRC), having studied 550 cases of custodial torture reported from India between 2005 and 2015, is of the opinion that State agents in India resort to torture for three main reasons. They are: (i) to force persons in custody to confess to crime; (ii) to extract bribes from persons in custody or from their family members; and (iii) to intimidate and silence persons to stop them from speaking against State agencies, powerful politicians, or financially or politically influential persons.

The State condones torture; fear created by allowing widespread use of torture is exploited to control the population. Besides, over the past 60 years India has invested the least in its criminal justice institutions in comparison to the investment in other sectors.

Lack of investment has left the Indian crime investigation and prosecution apparatuses in suspended animation, where protocols followed are mostly of British colonial times. Even the language used is “questioning a suspect” and not “interviewing a suspect” that is used in advanced jurisdictions. Cadets at the police academy are trained to use physical violence as an element of surprise and to subdue a suspect. Slapping, punching, caning, or kicking of persons in public while they are taken into custody is hence a common street event in India.

Most police officers believe that they have a right to ill-treat persons in their custody and to use force while interviewing suspects. This approach finds resonance within the bureaucracy, and with most politicians, who are ultimately responsible for reforming the criminal justice process. Prime Ministers, Chief Ministers, and even many judges believe that to police India what is required is a rough and tough cop and not a skilled service provider in police uniform.

This approach, of treating a suspect as a person with the responsibility to confess crime, has cemented the practice of obtaining confession first and then basing the investigation on this confession. Under pressure, police officers use torture to obtain the confession. It will be trite to argue that the investigation that follows, based on a confession made under duress, is destined to fail to prove the crime in trial.

Since torture is condoned as part of crime investigation, State officers also use it as and when it suits them. In a country where corruption is omnipresent, the impunity with which torture is employed has also led to its use, or the threat of its use, as a tool for extracting bribes from citizens. Besides, absence of infrastructure also forces the police to demand favours from persons ill fated to have to seek their services. Such favours include fuelling or paying repair bills of police vehicles, paying telephone bills of police officers, paying rent for police stations, and buying office stationary for police stations.

Despite this, the Union Government, in its 2015 budget, has reduced the budgetary allocation for police in Indian states. The reduction in Union allocation is of an estimated USD $133 million from the USD $560 million allocation last year.

Though, on the face of it, of the USD $296 billion non-plan expenditure earmarked in the Union budget, USD $8.6 billion allocated for the police appears huge, this amount is split between the Border Security Force, the Indo-Tibetan Border Police, the Assam Rifles, Sashastra Seema Bal, the Central Reserve Police Force, immigration units under the Central Intelligence Bureau, and the Land Port Authority. These entities are either specialist national institutions or paramilitary units not engaged in civilian policing.

The USD $8.6 billion spending is also shared for constructions along India’s land borders with Pakistan, Bangladesh, Burma and Nepal. In fact, out of the USD $8.6 billion Union allocation, after deducting expenses for the above paramilitary units and for other non-policing activities, there is hardly anything left for modernising the police. For instance, there is no allocation for setting up enough forensic laboratories, or for modernising the existing ones. What is reserved for training of police officers is a mere USD $4 million. And, this amount too is to be availed by officers of the rank of Superintendent of Police or above, whereas officers below this rank undertake most primary and advanced investigations.

On the other hand, between 80-90% of the police budget allotted by various state governments is spent on salaries and provident fund payments. Hence, the reduction in the Union budget for the police, at a time when it needs to be increased, will adversely affect not just the police but also all persons residing in India. All of this goes to show the priority given by the Union and state governments to reforming the police.

The situation of the Judiciary is equally appalling. The Union budget for 2015 has only earmarked a pittance of USD $13 million, which is a meagre 0.04% of the total budget spending, for the Judiciary. When translated into actual practice, this means no additional judges will result in a country that has one of the widest people to judge ratios in the world, and no additional infrastructure for courts to function, where delays in adjudication is perhaps the longest in the world. The limited budget will also stall the computerisation of court registries.

This means that, in India, despite all the assurances and pledges that the government has made in domestic and international fora, the practice of torture will continue. The country will not formulate a policing policy that fits the national claim that India is a democratic state. Its justice administration will continue as one that fits a colonial state that has wilted further.

To end this impasse, the country’s civil society and media must take the lead. India is not Bangladesh or Thailand where governments that show dictatorial tendencies rule. In India, despite the existing space for debate, the necessity of justice institution reforms, particularly the reform of the criminal justice process, is a blind spot. Unless the country’s civil society and the media recognize the correct form of the elephant in the room and rise up to this challenge, the distance that India as a nation needs to travel to become a Bangladesh or a Thailand will never be far.