PAKISTAN: Investigation failure leads to the killings of Ahmadis

Religious persecution has dominated human rights abuse in Pakistan. Ahmadi religious minorities have been the preferred targets of religious fundamentalists. Recently, another Ahmadi, Dawood Ahmad, was shot dead in the Gulzar Hijri area of Karachi, on the night of 24 May 2016. He was the target of religious malice and hatred against Ahmadis in Pakistan, which shows no sign of abating.

According to media reports, Mr. Dawood was waiting for a friend outside his house when two men came on a motorbike and opened fire on him and fled. Three bullets hit him: one in the chest and two in the abdomen. He was injured critically and was rushed to hospital, but he did not survive. 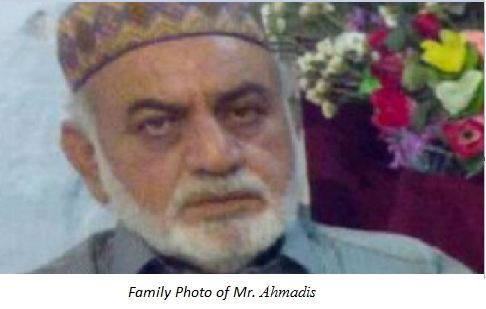 Since 1984, thirty Ahmadis have been killed in Karachi. To date not a single murderer has been brought to justice. The State, in order to appease its allies, i.e. the religious fundamentalist and political religious party does not investigate murder cases of Ahmadi victims.

The investigation and prosecution are non-existent when it comes to the murder of an Ahmadi because the State is prejudiced and biased against the community. The beleaguered community is left high and dry; even the Judiciary maintains a deafening silence on the injustice. Fearing a backlash from fundamentalists, no judge dares speal in defence of an Ahmadi. Religious sentiments are allowed to colour State policies so much so that the minorities, particularly Ahmadi; no longer feel safe in the country.

The failure of the State is not only in failing to provide protection to religious minority groups, but it is also in providing patronage to such killings by not investigating the killings. The personnel in the police and other law enforcement agencies are themselves so biased that they avoid investigating Ahmadi murders.

The nascent and ineffective National Action Plan was devised primarily to curb religious hatred and fundamentalism; however increasing incidents of targeted attacks on minorities has showcased the manifest loopholes in the plan. The elements who have promoted hate against Ahmadis do not only roam free; they continue to be busy spreading hateful propaganda, without any fear of State action. Pakistani authorities have so far shown no interest in curbing the activities of these groups.

The hate speech in Pakistani media against the Ahmadis largely goes unnoticed by the Pakistan Electronic Media Regulatory Authority (PEMRA). The trend of violence is deliberately allowed to spiral out of control, making it difficult for the beleaguered Ahmadis to live in Pakistan. The violence has now become imminent in western nations as well, due to the negligence of the Pakistani authorities, who continue to allow religious zealots to spew hatred. (Click here for more.)

The State is increasingly involved in religious persecution. No longer a silent spectator in systematic and continuous religious persecution, the State has became an active abettor on 25 September 2014; a 71-year old prisoner who was awarded the death sentence in a blasphemy case was attacked and critically wounded when a cop on duty opened fire at him in Adiala Jail, Rawalpindi, which is close to the capital city of Islamabad.

Years of institutionalized discrimination against the Ahmadiya Community and its persistent vilification have led to extreme apathy, where even the mass murder of Ahmadis in Lahore on 28 May 2010 failed to elicit any kind of public outrage. The murder of an Ahmadi is in fact praised and encouraged by the so-called guardians of Islam, and the murderer is extolled and revered. In a country where murderers are celebrated and Ahmadi Noble prize winner Dr. Abdus Salam is vilified, it is only natural that society’s fault lines deepen each day.

The utter disregard for the rule of law and complete impunity to law enforcement agencies is a recipe for disaster for Pakistan’s minorities especially Ahmadi Community, who, despite having the constitutional guarantee of state protection, are left to fend for themselves. State bias and prejudice is apparent in the judicial and administrative attitude towards the Ahmadi; they are made to suffer incessantly for their beliefs and denied promotion and jobs in State departments. They are not even allowed to openly profess their beliefs; their properties and even graves are not exempted from being vandalised by the unruly fundamentalist. The State does not intervene to protect the life or property of an Ahmadi, despite its obligation to protect its citizens.

Since its inception, Pakistan has been battling a religious and existential fight with itself. A country that emerged in the name of a specific religion has yet to establish the definition of a Muslim. A Sunni Muslim Punjabi male is what best conforms to the State ideology and orthodox theology. The Judiciary also appears complacent and meek in the face of religious fundamentalism and orthodox clergy who are bent on enforcing and implementing the firebrand version of Wahabbism, a religious movement that seeks to restore Islam to its “original form”).

It’s been 40 years since Ahmadis were declared non-Muslims through an amendment in the Constitution, which resulted in wide scale persecution and victimization of the sect. Nowhere in the world does any minority suffer such persecution at the State level. Ahmadi’s, despite playing a pivotal role in the politics of the country since its inception have been alienated, their political representation has been reduced to nil. It is becoming increasingly difficult for the Community to profess its religious belief with freedom and without fear despite the constitutional guarantee under Article 20, which stipulates:

“20 Freedom to profess religion and to manage religious institutions.

Furthermore, ICCPR specifically prohibits any curb on the freedom under Article 18 (2): “No one shall be subject to coercion which would impair his freedom to have or to adopt a religion or belief of his choice.”

« PAKISTAN: Call to curb rise in violence against women

INDONESIA: President must fulfill promise to solve the Paniai case, and investigating team must commence work »