A video has recently surfaced in Pakistan, where a contingent of police officers can be seen baton charging a group of unarmed women mill workers protesting in Muzaffargarh, Punjab. The scuffle occurred inside the district court of Muzaffargarh in broad daylight, yet the judicial officer never took any action against the erring police officers, nor was any police officer suspended for transcending his authority. Click here for the Video Link 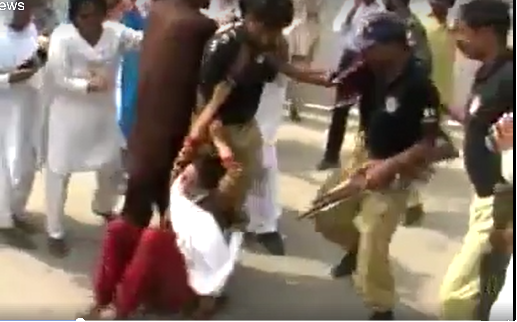 Police brutality and violence is not a new phenomenon in the country. Law enforcement officials regularly transcend their authority amidst a lack of accountability, leaving ordinary people to suffer silently. In particular, religious minorities, women and children suffer the wrath of the police the most. It is tragic that those to be protected by the police become its victims. This is largely because policing in a security state is not about protecting the weak, but maintaining the status quo of hegemonic and unpopular regimes.

Constituting 52 percent of Pakistan’s population, women in the country are customarily denied their constitutional, legal and religious rights. They suffer from violence by family members as well as state institutions such as the police and judiciary, through both action and inaction.

Despite recruiting more women amongst its ranks, there is no shift in attitude or gender sensitization within the police force. Perhaps it is intrinsically ingrained in the policing system of Pakistan, which sides with the deep pocketed perpetrator, leaving the victim high and dry. Feudal capitalism, a linchpin of patriarchy, and the resulting mindset ensure the continuity of systemic oppression and gender subordination of women in the society. 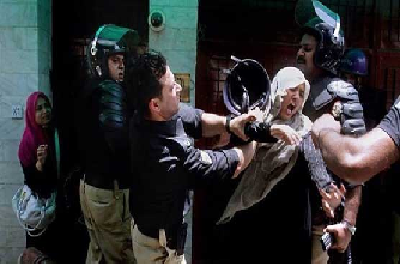 Women are deliberately kept at the receiving end of socio economic and cultural discrimination and prejudice that hampers their empowerment. State institutions unfortunately do little more than pay lip service to the cause of emancipation of women. When protectors themselves become the perpetrators it becomes impossible to seek or even expect justice. Consequently, most violence against women goes unreported, with victims fearing further victimization at the hands of the police.

The epidemic of unpunished police violence against women is at the core of the non implementation of women friendly laws. According to a report titled “Double Jeopardy: Police Abuse of Women in Pakistan”, by Human rights Watch, more than 70 percent of women in police custody are subjected to physical and sexual abuse by law enforcement agents, yet not a single police official has been subjected to criminal penalties for such abuse.

According to the report, Pakistani police routinely deny women basic protection due them by law. Police often refuse to register rape complaints by women, particularly if the complaint implicates an officer. Officers frequently illegally detain women in police lock-up for days at a time without formally registering a charge against them, or producing them before the magistrate within the prescribed 24-hour period. Although women police officers are required to be present at the arrest and interrogation of women, this rarely occurs. Thus, women prisoners are often held in custody indefinitely by male police officers, without the knowledge of the courts. Most sexual abuse of female detainees occurs in these periods of “invisibility.”

The Pakistani government’s failure to prosecute rape, sexual torture and physical abuse of women by the law enforcement agency officials amounts to complicity in violence, and a systematic denial of equal justice to women.

Apart from the police and military in Pakistan, other state officials are also prone to abusing citizens. For instance, in April 2017, a Norwegian national was beaten up by a w oman Federal Investigation Agency (FIA) officer. Ms. Fouzia, the victim, had reportedly asked for toilet paper from an FIA officer, mistaking her for a janitor. Infuriated, the woman official later tore Fauzia’s boarding pass. Fauzia along with her mother and sister were also roughed up by the FIA staff in full view of other passengers and airport staff, none of whom intervened.

The Asian Human Rights Commission (AHRC) calls on the government of Pakistan to denounce publicly the sexual and physical abuse of women by state agents, to put an end to impunity for crimes of custodial violence against women and to guarantee women equality before and equal protection of the law. It is incumbent upon the state being the guardian of the downtrodden and underprivileged, to guard the interests of these vulnerable groups and ensuring their rights are not infringed upon by the powerful and mighty.

« SRI LANKA: What is Folk School Method and what is its relevance to human rights work – Two Videos;

INDIA: Ominous arrests point at imminent rule of the outlaw in Uttar Pradesh »