The scenic Parachinar valley, capital of the federally administered Khurram Agency, has been under the grip of sectarian violence for many years, resulting in thousands of deaths. However, the Parachinar twin blasts on June 23 were the deadliest, unnerving citizens ahead of Eid al-Fitr, marking the end of the holy fasting month of Ramadan. The Parachinar bombings took place while people were shopping for iftar and Eid in the Turi Bazaar area, close to a crowded bus terminal. 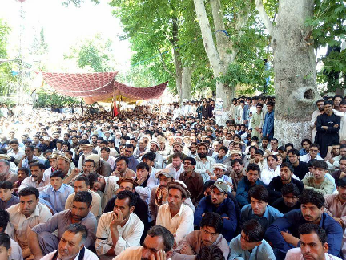 In solidarity with the mourners of Parachinar, Shias and Sunnis throughout the country are jointly holding protests, demanding the government and army to enter into a dialogue with the Parachinar people and visit the affected areas. Unfortunately, the Chief of Army Staff, the Prime Minister and Federal Minister of Interior Affairs are avoiding the area.

Khurram Agency is bordered by Afghanistan from three sides, and thus it remains a convenient base for Al-Qaida, ISIS and Taliban forces. While these extremists have always been supported by the security establishment of Pakistan, the local Shia population is the main hindrance for their settlement in the area.

Six days after the blasts, Prime Minister Nawaz Sharif announced Rs.1 million as compensation for each victim’s family, and Rs. 0.5 million for the injured. The Shia tribal elders and the protestors have rejected the compensation amount. The protesters expressed disappointment over the disparity in compensation announced for the victims of the Parachinar blasts and for those affected in the oil-tanker explosion in Bahawalpur, Punjab. The federal government announced Rs. 2 million for the victims of the oil-tanker explosion.

Parachinar protesters are also demanding the punishment of Colonel Umer, the Frontier Corp Commander of the region who ordered the direct shooting of protestors after the twin bomb blasts. They are also demanding the removal of the political agent of Khurram Agency, who was appointed by the Federal government to control violence against the Shia population. Following the twin blasts that claimed 100 lives, protestors sat in front of the political agent’s office with the dead bodies of their loved ones, demanding his resignation. The local administration and law enforcement agencies are not even allowing the aggrieved the right to peaceful assembly to protest the killing of their loved ones.

Earlier in April, a peaceful protest rally was fired at on the orders of Colonel Omar Malik, which killed three protestors while injuring dozens. A video of the shootout can be viewed here.

Though Parachinar valley has long been suffering bloodshed, the year 2017 has been particularly gruesome with ongoing military operations, and a new wave of bombs blasts and suicide attacks. Since January, more than 175 people have lost their lives in the violence and bomb blasts. The once peaceful valley has turned into a battleground since 2002.

According to local tribal elders, the region was comparatively peaceful until the local authorities demanded that the people surrender their weapons and the region was demilitarized. The responsibility of security was taken from the local militia and vested with the Frontier Corp personnel, who largely belong to the Sunni sect. Khurram Agency is the only part of Pakistan’s border region that has a significant Shia population, and thus has a history of sectarian violence.

The Pakistan government has been stoking the sectarian violence by its inaction against the perpetrators, while arresting and threatening Shia tribal leaders. The arrests are a systematic move to instil fear within the Shia community. Despite being a majority in the area, the Shia community are forced to live in fear of genocide by banned groups who have vowed to “make Pakistan a graveyard” for all Shias. In May 2015, an outlawed organization held a public demonstration calling for all Shia Muslims to be put in camps. Since 2001, 2558 Shias have lost their lives in such attacks. According to the Dawn, clashes in Kurram from November 2007 to 2010 had left over 3,000 people dead while thousands of families were forced to flee their homes. Majority of the displaced families have yet to return to their native lands.

The violence is further fuelled by the Frontier Corp’s brutality against protesters. In 2016, at least three people were killed and 11 others injured, during an alleged exchange of fire between security officials and protesters. The clash occurred when security officials tried to disperse protesters who had blocked the main Parachinar highway due to the administration’s decision to not allow two scholars to attend a religious gathering.

Earlier in 2012, Frontier Corp personnel opened fire at a protest rally, killing five innocent persons. The rally was held to demand the court martial of the security officers who opened fire at the funeral prayers of the 43 persons killed in a suicide attack in Parachinar city, for allegedly “defying curfew”.

Being a signatory of the Convention on the Punishment and Prevention of Genocide, which defines genocide as when a party has the intent to destroy a religious, ethnic, or racial group “in whole, or in part” and acts on that intent by killing, injuring, or deliberately causing conditions leading to the physical destruction of that group, Pakistan has a responsibility to prevent these acts. The criminal negligence of the Pakistan government and army in addressing the Shia killings in Khurram Agency is flaring up sectarian violence throughout Pakistan.

Meanwhile, the Pakistan Electronic Media Regulatory Authority (PEMRA) observes an unofficial media blackout on the protest and violence in Parachinar. Social media has also been muzzled substantially, largely due to the Prevention against Electronic Crime Act (PECA), which makes it illegal to speak up against the state or law enforcement agency. As a result there is hardly any news on Parachinar.

The Asian Human Rights Commission urges the Pakistan government to take immediate steps to end the mass killings of Parachinar people through bomb blasts, suicide attacks and military operations in the area. The government must immediately remove Khurram Agency’s political agent, who is allegedly following the dictates of the Taliban, and punish Colonel Umer for directly shooting at the protestors. It is high time that the government protected the local inhabitants, rather than the extremists who are sowing violence.

« SRI LANKA: Businessman abducted and family demands a speedy investigation to save his life

INDIA: Weed out the rogues in uniform rather than trivialising rape »