Glamorizing terrorists as born again saviours of humanity is the new tactic adopted by the state to abet home grown terrorism. Those who dare demand their rights are shunned as separatists while the radicals who commit barbarity are released on the pretext of being innocent. The recent news of the release of ISIS operative Naureen Laghari as an “impressionable mind gone awry” has elicited countrywide protest. Civil society is rightly pointing out the discrepancy in dealing with children arrested in Quetta in 2013 and the more recent kidnapping of three more children from Khudar Area of Balochistan. 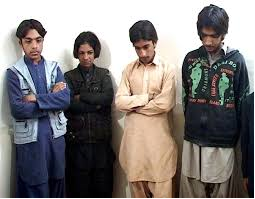 Nowhere else in the world is the constitutional guarantee of equality of citizens as redundant as in Pakistan. The policy of demarcating ‘good Taliban’ and ‘bad Taliban’ is a covert way of giving impunity to terrorism and extremism. The state’s atrocious policy of abetting terrorism for its own ulterior motives is the reason for the 80,000 reported civilian casualties caused due to terrorism. While the state may pardon ISIS bride Naureen Leghari, it continues to incarcerate 15 children belonging to Baloch separatist groups.

By glorifying Naureen Laghari and ex Taliban spokesperson Ehsan Ullah, the government is suggesting to the general public that if they joined state approved terrorist organisations, they have a better chance of being absolved of their crime than being associated with a separatist group. Naureen’s case makes for an interesting read into how the state apparatus has been dysfunctional at curbing radicalisation of the urban middle class educated youth.

Naureen Laghari, daughter of a professor at Sindh University and a medical student at Sindh’s prestigious medical university, was radicalised via ISIS online cells actively recruiting educated youth for its terrorist activities. Naureen was neither the first nor the last one of these unfortunate youth to forgo their careers and future in exchange for existential obscurantism.

According to media reports, Naureen was to attack a church at Easter, before the gang was busted in Lahore by law enforcement agencies. While addressing a press briefing, the Pakistan Army spokesperson Major General Asif Ghafoor said that Noreen Laghari was not a terrorist, but was about to become one when she was saved by security forces. He further said, “she had been saved well before her immature mind was brainwashed by militants”.

Meanwhile, in another case, police busted a Baloch separatist terrorist gang in 2013, comprising of children allegedly involved in a series of bomb explosions in Quetta. Police arrested 11 children after an encounter, all of whom were between 11 to 18 years of age, belonging to extremely poor and downtrodden families. Not known for displaying sensitivity in cases involving children, the Pakistan police paraded the gang of boys before the media after the raids. The children were apparently to be used by terrorists to carry out terrorist incidents at crowded locations of Quetta city.

Four years since their arrest, the children are yet to receive “official pardon” and are facing trial at anti terrorism courts. According to their lawyer, despite their young age the children were charged in 22 cases under 7-ATA and many other penal Acts. They were all arrested on mere charge of disclosure, and nothing was recovered that shows their direct or indirect link with the United Baloch Army terrorist group.

The growing extremism among young boys growing up in Balochistan is partly to be blamed on the apathy of the federal government. Despite being natural resources, Balochistan is impoverished in terms of basic amenities such as medical and educational facilities. Children as young as 10 are thus increasingly vulnerable to recruitment by separatist organizations.

Security forces have been accused in recent years of carrying out a string of kidnappings and brutal murders of local men, the vast majority of which are not investigated. Perhaps the state has neglected the fact that when peaceful revolution is made impossible, violent revolution is made inevitable.

Major General Asif Ghafoor reportedly posed the question at the press conference, that “Should we treat Noreen like a terrorist or release her so that she can tell others how she was trapped and used for terrorism?” According to him, by releasing her, “awareness will be created among the younger generation and parents as well as institutions.”

By such logic, why not release the Baolochi children four years after being incarcerated, so that they may enlighten the world about the hazards of being poor and vulnerable in Pakistan? Even better would be to financially support their families, who are dependent on their USD 20 income generated from terrorist activities to sustain themselves.

While glorifying Naureen as turned-a new-leaf youth ambassador, the media appears to have forgotten about the innocent Balochi children. Were the Balochi children also not of impressionable age when they were arrested? In fact, they weren’t even legally adults, while Naureen is 19 years of age. When persons are hung for crimes allegedly committed when they were not legally adults, why not hold Naureen guilty of the crime as she has come of age?

The equality of citizens as provided in article 25 of Pakistan’s Constitution is nothing but a misnomer; the policy of selective unleashing tyranny has successfully recruited more people in the folds of extremism and violent actions than all the propaganda videos combined.

The Asian Human Rights Commission (AHRC) urges the government of Pakistan to rethink its state policies on eliminating religious terrorism. Allowing a class divide to colour the administration and dispensation of justice will result in chaos and further break down of law and order.