Home / News / PAKISTAN: Massacre in Lahore demonstrates the collapse of rule of law

PAKISTAN: Massacre in Lahore demonstrates the collapse of rule of law 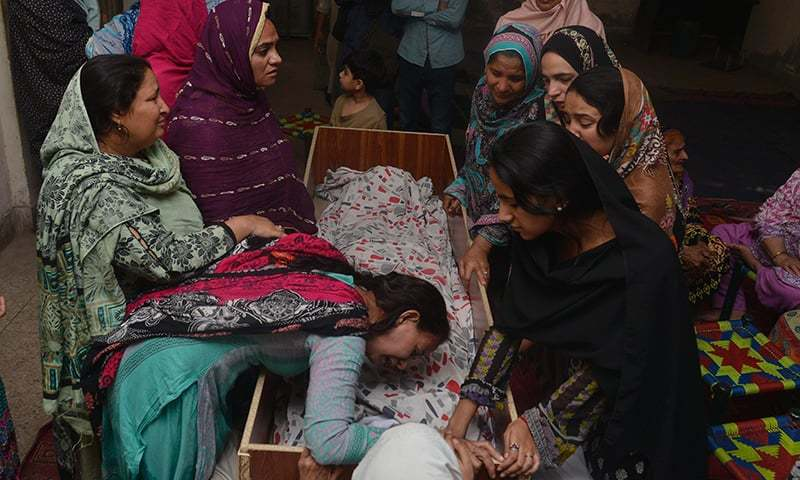 Photo by AFP, courtessy to Dawn

The Asian Human Rights Commission (AHRC) strongly condemns the Easter day carnage in Lahore, the provincial capital of Punjab, and urges for a high powered judicial inquiry into the death of 72 innocent citizens, and the injuring of more than 350 persons. The AHRC expresses its condolences and solidarity with the families of the deceased and injured victims.

On Easter day, celebrated across the world on March 27, a suicide bomber blew himself up in a park, in the densely populated town of Allama Iqbal, Lahore, killing at least 72 people and injuring over 350 others. Occurring near the children’s play area, most of the deceased were children and women celebrating Easter at the popular park. This attack is likely to be the deadliest assault on Pakistan’s Christian minority since the bombing of Peshawar’s All Saints Church in 2013.

The Taliban faction Jamaat-ul-Ahrar claimed responsibility for the suicide attack, saying its target was the Christian minority. Lahore, capital of the populated and affluent Punjab province has previously been spared the worst of terrorist attacks, but a statement issued by Mr. Ehsanullah Ehsan, spokesman for Jamaat-ul-Ahrar, says, “We want to send this message to Prime Minister Nawaz Shareef that we have entered Lahore. We can do what we want but we cannot stop. Our suicide bombers will continue these attacks.”

Earlier in the day, a religious mob of 2,000 stormed Pakistan’s capital city of Islamabad, and clashed with police outside the Parliament house and other sensitive areas. The mob later began a sit-in for an indefinite period until their demands are accepted by the government, including the execution of a Christian lady, Ms. Asia Masih, who was sentenced for committing blasphemy. The religious group was agitating against the execution of Mumtaz Qadri, who killed the former governor of Punjab province for supporting Ms. Asia against the blasphemy charges.

How long will the state allow these barbarians to slay innocent children studying in schools or playing in parks? These incidents and the challenge posed by the attackers to the state underpin the failure of the National Action Plan, which was designed to combat the growing terrorism jointly by all the political parties with military leadership. Not only have the terrorist attacks shown no signs of ceasing, but the attacks are increasingly aimed at soft targets such as parks and schools.

The government has totally failed to stop such actions, and has not initiated any judicial inquiry into incidents where children and women are made targets. In the incident at the Peshawar Army Public School where more than 150 students and staff were massacred by the Taliban in the tight security of the military, the military establishment itself did not allow any inquiries.

Governance in Pakistan has totally collapsed, with both military and civilian governments failing to provide security and protection to the citizens for many decades. After the carnage of the Army Public School, the military establishment asked civilians to provide absolute powers to law enforcement agencies, including the power to shoot at sight (extrajudicial killings), keeping suspects in custody for 90 days, and the formation of military courts. Even after having such powers, religious militants and terrorists are free to conduct suicide attacks. The attackers at Islamabad travelled 10 kilometers where there are police and military checkpoints, but no one stopped them.

According to German broadcasting, DW, the two events are inextricably linked, say observers. The nuclear-armed Pakistani state is increasingly falling into the hands of Islamist extremists. Efforts by the Pakistani government and military to eradicate home-grown terrorism have so far failed, despite claims that an ongoing military operation has defeated the Taliban and other militant groups.

Over the years, their terror tactics have morphed into hit and run, and their targets have shifted from the Military’s General Head Quarters (GHQ) and military instalments to vulnerable soft spots such as schools, parks and places of worship. As a result, innocent women and children are increasingly being attacked. Law enforcement agencies have so far been groping in the dark, unable to perceive the real threat that lies within their own ranks. It is no secret that many amongst the military’s top echelon still have a soft spot for the Taliban. Though General Shareef has proclaimed an all out war on militancy, political parties have thus far borne the brunt of the operation, instead of the madrassahs churning out suicide bombers.

Shahbaz Shareef, Chief Minister of Punjab, tweeted his condemnation of the incident when he should have been visiting the injured. Punjab province is the power base of the Shareef brothers (Prime Minister Nawaz Shareef and his younger brother Shahbaz Shareef), where Christians are most often the targets of Punjabi Taliban and extremists. Time and again, the state has failed to protect its vulnerable Christian citizens from unscrupulous elements. In 2015 during Lent, suicide bombings at two churches in Lahore’s Youhanabad neighborhood sparked violent protests from Christians angry at the Punjab government’s lack of protection. Lahore’s Joseph Colony suffered a mob attack in March 2013. Elsewhere in the province of Punjab, a village mob burned alive a Christian man and his pregnant wife in November 2014. In 2009, eight Christians were killed by mob violence in Gojra. Open Doors’s 2016 World Watch List ranks Pakistan number 6 among countries where it is hardest to be a Christian.

Pakistan Muslim League-Nawaz (PML-N) has always had trouble ensuring the rule of law in the country. The Shareef brothers’ lack of political will to protect the country’s minorities has caused growing frustration. Perhaps 1.6% of the country’s total population is too small a figure for the Shareef brothers to bother with, as they are busy appeasing their main constituencies, the orthodox clergy and right wing political parties. The state’s patronage has always been absent for the community that is also not adequately represented in the legislative assemblies. Without a voice, the community has been left in a lurch every time a terrorist attack targets their homes or places of worship.

INDIA: Man tortured and detained for more than nine hours in Kerala »