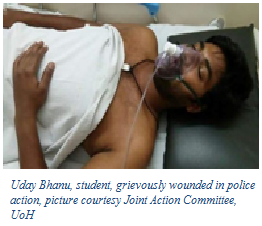 Cutting off electricity, water, and Internet facilities, closing down messes, chasing all the media persons out, and then calling in the Paramilitary to swoopdown on students in the campus sounds like routine work in a dictatorship, not a democracy. Yet, this is exactly what the University of Hyderabad administration, which works under the Union Ministry of Human Resources Development, has subjected the students to yesterday.

The students were protesting against the return and resumption of duties by the Vice Chancellor Appa Rao Podile,who is the main accused in the case of abetment of suicide of Dalit scholar Rohith Vemula, whose death shook the nation.

Allowing a person, who is under investigation for such a serious offence, to return and resume charges defies rudimentary understanding of the rule of law, not logic alone. Whoever atop the Indian government is behind the decision would have known well that it would enrage students and invite protests. One may therefore ask if the decision was made to unleashthis violence on students, who have not backed off their protest, seeking justice, for months now.

The conspicuous way in which the VC returned to campus hints at the same. So does a letter by the Registrar of the varsity to local police seeking their intervention. Worse, the resultant crack down, after chasing the media out, seems to confirm the plan behind the action.

Together with charging at the students, the police and paramilitary persons raided specific rooms in hostels across the campus, as if they had a pre-determined list of those they wanted to apprehend. And this they did: the police picked up 36 students, all of them leading activists of the Joint Action Committee, the umbrella group that is coordinating the nation-wide campaign for justice for Rohith, as well as 3 faculty members. The detainees were held overnight in unspecified locations, and allegations of torture, have already arisen.

Leading women organisations of the country have also narrated the way police and paramilitary personnel attacked the girl students, molesting them and threatening them with rape in the process. Many of them have suffered grievous injuries. The police action has also caused critical injuries to Uday Bhanu, a research scholar. He remains admitted to the intensive care unit of a local hospital, and is struggling for life. More details including video testimonies can be found here.

The attempt, clearly, was breaking the backbone of the movement for justice to Rohith, which has taken the country by storm, and is causing serious trouble, both perceptually and actually, to the ruling establishment. This trouble to its sense of power and control, however, does not allow the government to defy laws, and act as if an emergency has been imposed. The country has dealt with one emergency in living memory, which had grievous consequences. Another such attempt, whether declared or undeclared,will only destroy the soul of the body politic.

The Asian Human Rights Commission unequivocally condemns the barbarities that have been committed on the students, and urges the government of India to back offfrom the campus now. Furthermore, Vice Chancellor P. Appa Rao should not be permitted to resume charge until the completion of a fair and impartial investigation.The Commission also asks that the government fix command responsibility for yesterday’s action, and prosecutes and punishes those responsible.

« THAILAND: Lawyers Society of Thailand urged to preserve its independence as a professional association