Home / News / INDONESIA: A police officer who slammed a student activist must be prosecuted under the fair trial principle

INDONESIA: A police officer who slammed a student activist must be prosecuted under the fair trial principle

On Wednesday, October 13, 2021, a video with a duration of approximately 45 seconds circulated, which once again showed the brutality of a police officer. Here is the video link.

In the video, a police officer can be seen slamming a participant of a demonstration onto the sidewalk, causing the person concerned to lie down and experience convulsions, and become unconscious. 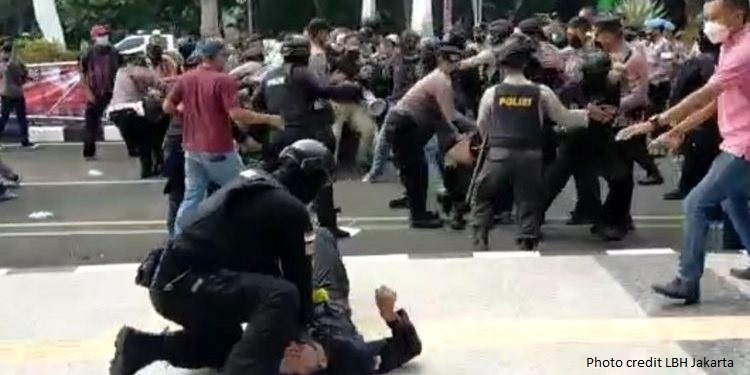 This incident took place when students were demonstrating in front of the Tangerang Regent’s Office to express their aspirations, one of which demanded the Tangerang Regency Government to immediately resolve issues related to Regent Regulation Number 47 of 2018 concerning Restrictions on Mining Transport Operational Hours.

We noted that the police violate some regulations as follows:

First, the brutal actions of the police officers are contrary to the various existing laws and regulations; moreover, the right to the freedom of expression for participants in the action is guaranteed by Article 28 of the 1945 Constitution. Also, it violates the criminal law, namely collective violence in advance. general rules as regulated in Article 170 of the Criminal Code (Kitab Undang-undang Hukum Pidana – KUHP).

In addition, there is also police chief regulations (Perkap) Number 7/2012 concerning Procedures for Service Implementation, Security, and the Handling of Public Opinion Cases; Perkap Number 2/2006 concerning Crowd Control; police chief regulations (Perkap) No. 2/2019 concerning Riot Enforcement which emphasizes that police officers in carrying out their duties to secure demonstrations must carry out such professionally, while respecting and protecting human rights, especially rights that cannot be reduced at any time and under any circumstances.

The second relates to a clarification video from the Tangerang Police and the victim that circulated a few hours after the video of police brutality went viral. The video clarification and information were problematic, because the information was conveyed without being supported by the results of the victim’s expert health examination so that neither the victim nor the police have the credibility to convey if the condition in question is fine.

In addition, the information conveyed in the strong clarification video can be considered as information given under pressure because of the unequal power relationship between the victim and the police, given also that the information was submitted by the victim without legal assistance.

This is a mistake on the part of the law enforcement officials, because demonstration is one of the human rights guaranteed by the Constitution as well as Law Number 39/1999 on Human Rights. Based on Law No. 9/1998 on the Freedom to Express Opinions in Public, where notification is required, and not permission from the police.

Fifth, there is an attempt to trap or frame demonstrators by the police against the mass action by forcing urine tests. Based on Article 75 of the Narcotics Law, the implementation of an urine test can be carried out by investigators at the investigation level.

The case of police brutality against participants in the demonstration in front of the Tangerang Regent’s Office is a sequence and a concentration of the repetition of events that have occurred. This cannot be separated from the practice of impunity and the absence of strict law enforcement against police officers who violate. As a reminder, in 2019, there were several demonstrations that were familiar with the brutality of the police. May 21-22 riots that left 5 people dead (4 due to bullets, and 1 due to blunt objects).

In the last #ReformasiDikorupsi Action, in carrying out security, the police carried out violence against at least 88 people who were rushed to the Pertamina Central Hospital (2 people suffered head injuries). The Advocacy Team for Democracy received 390 complaints from victims of police violence, including 201 victims who were university students, 50 students, 13 victims who were employees, 3 vendors, 2 casual employees, and 1 motorcycle driver who complained online.

During the demonstration against the Omnibus Law, last August 2020, dozens of videos of the brutality of police officers who carried out violence against demonstrators were also circulated. From the complaint data submitted to the Advocacy Team for Democracy, 187 people were brought to the Polda Metro Jaya. Based on information from the victims, they experienced violence from members of the Police when they were arrested. Apart from the participants in the action, 28 journalists also experienced violence by the police when covering the public’s rejection of the Omnibus Law.

The #PolriTegasHumanis (Police Emphatic and Humanity)# jargon must be proven, not just an apology to refute public criticism of the police’s performance. If the police remain indifferent and do not take legal action against the officers who commit violence, then it is not wrong if the public prefer to believe in the jargon of the #PercumaLaporPolisi# (Useless Filed Police Report)#.
Based on the foregoing, the Civil Society Coalition Against Violence urges:

1. For the National Police Chief Listyo Sigit Prabowo to order the Banten Police Chief and Tangerang Police Chief to respect the constitutional rights of citizens to express opinions in public and stop the arbitrary arrests of participants in the action;

2. The National Police Chief to break the chain of impunity and ensure law enforcement, whether criminal, discipline or ethical, so that it applies to all police officers who carry out brutality against demonstration participants;

3. The National Police Chief to conduct a thorough evaluation of the procedures for securing demonstrations;

4. Komnas HAM, Kompolnas and the Indonesian Ombudsman to directly investigate the arbitrary arrests and brutality of the police officers to balance the efforts that lead to violent impunity.