SRI LANKA: Legal and Societal Consequences Arising from the Failure to Deal with Enforced Disappearances

(Issued on 27 October 2021, 31st annual commemoration of the disappeared in Sri Lanka.)

A statement on enforced disappearances 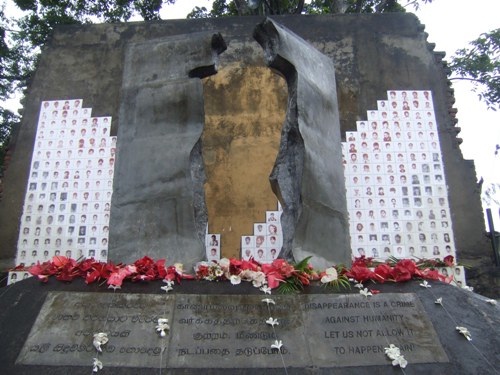 On this day, many issues and unresolved problems regarding persons who have been made to forcibly disappear are remembered and discussed.

We could summarize such unresolved problems regarding enforced disappearances in Sri Lanka as follows.

1. What is considered an enforced disappearance in Sri Lanka is the illegal arrest which often takes the form of kidnapping, illegal detention, often in places which are not authorized places of detention, torture, and interrogation, a decision being taken to kill a person and the actual execution followed by taking measures to hide or destroy the bodies in a way so that no trace could be found. And these acts are done either by the police or by persons working for the security forces. The Killing and disposal of the bodies of those who surrender to security forces are also included in this category. All these actions are done in violation of the laws recognized in the country. Commissions of inquiry into involuntary disappearances have been appointed in the past and according to the definitions given by these commissions, what is considered as disappearances in Sri Lanka constitutes the following elements: Arrest a person without following the legal processes relating to arrest and often by way of abduction, these persons who have been taken into custody illegally are often kept in places which are not authorized places for detention. At these places of detention, they are interrogated and tortured, then decisions are taken to kill the person and these decisions are also executed secretly. Thereafter, the bodies are disposed of in a manner so that the usual procedure for identifying bodies are not followed and the rules relating to burials or cremations are also violated. Among the countries which have the highest level of disappearances, Sri Lanka ranks second. The numbers of disappearances have to be counted in the tens of thousands and these enforced disappearances have taken place in the South, North and East, and in urban centres as well as in rural settings.

2. The members of the families who have disappeared and close relatives and friends have for a long period, consistently demanded information regarding the whereabouts of their family members who have been made to disappear. They have also demanded that justice be done relating to the disappearances. However, no serious attempts have been made to provide justice relating to these disappeared persons and to respond to the demands of their relatives. After years of frustration, even the belief or the hope that justice will be provided for these families of the disappeared has been almost lost. There are no serious expectations that credible inquiries will be made into enforced disappearances, and without such credible inquiries, the possibility of prosecuting the offenders cannot take place. And without this process, the judiciary is unable to ensure that the rights of the complainants in enforced disappearances cases could be guaranteed within the framework of the judicial process in Sri Lanka. 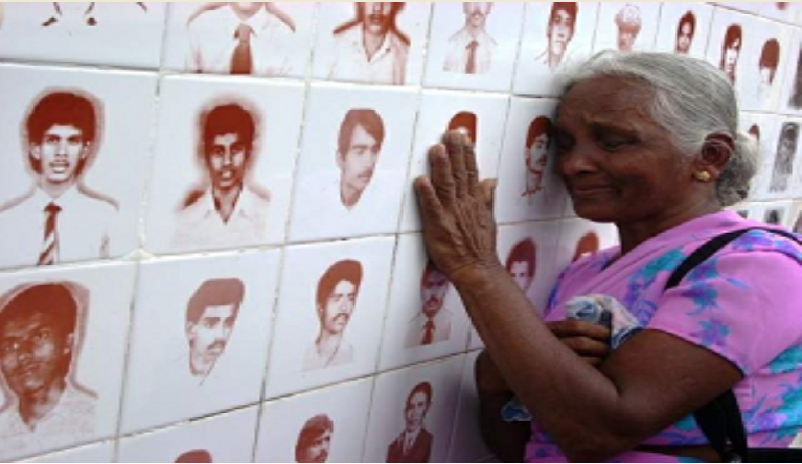 3. Internationally, there had been for a long time, concerns expressed about these enforced disappearances and demands have been made to ensure that these serious crimes are being dealt with within the framework of international principles relating to these matters. However, there had not been a credible response to these demands by the successive Governments in Sri Lanka despite many undertakings given at many international forums such as the United Nations Human Rights Council.

4. Under the former Government, an office for the disappeared persons in the form of the Office on Missing Persons was established in order to gather information about the complaints on enforced disappearances. The first group of commissioners were able to record a large number of cases of such complaints and also to establish a database on the basis of the information they had gathered. However, after the expiry of the period of office of the first batch of commissioners, new commissioners have been appointed and there is no public confidence that the newly appointed commission will pursue their mandate with the required commitment and seriousness. In any case, what the office of the disappeared persons does is purely to engage in fact finding and it does not have any mandate or any capacity to engage in criminal investigations as required in the case of dealing with crimes under the Code of Criminal Procedure of Sri Lanka. As the office of disappeared persons does not have such a mandate, the commissioners of this office do not have the mandate or the capacity to engage in ensuring justice under the criminal law of Sri Lanka.

5. As a result of this, thousands of families of disappeared persons do not have a reason to trust that they could expect justice regarding this heinous crime. In spite of that, the families of the disappeared are deeply interested in knowing what has happened to their family members as they have done so for many years now. As far as these families are concerned, this problem is deeply and constantly felt as a part of their daily life and experience. As the result of these tensions, there are many in these families who have suffered physical and mental ailments and some have died as a result of related illnesses. Among the children of the disappeared, there is a natural desire to know what happened to their parents and this remains an indelible part of their minds which causes serious pain for as long as they live.

6. In all civilized societies, the murder of anybody is considered an extreme form of cruelty and an act that everyone should make an effort to eliminate. When a murder is done to a person who is in somebody’s custody, it is considered a much more barbaric act. Thus, when enforced disappearances happen in a large scale in any society, that is an expression of very extreme forms of the breakdown of civilized ways of living in any society. In spite of that, Sri Lanka, where such large scale murders in the name of enforced disappearances have taken place, there has not been an adequately strong reaction from the society against such acts and also a demand for justice. All persons of goodwill should reflect seriously as to why within the Sri Lankan culture, it has not been possible to generate a strong reaction against this form of extremely immoral and heinous crime. For this reason, it is not possible to consider the failure to provide justice for the enforced disappeared purely as an act of the State only but society also has a responsibility in this matter. It is necessary to consider the deeper problems that exist within the Sri Lankan culture and society which hinders them from reacting strongly against such a heinous form of human behaviour. Due to this, the day of commemoration of the enforced disappearances should be a day on which the society itself examines its conscience and makes a genuine attempt to understand what limitations it has, to have become unable to react with moral indignation against such occurrences. Therefore, it should also be a day on which the nature of what is considered as civilized within the Sri Lankan society should also be deeply examined.

7. Thus, there are two issues intertwined. There is the failure of the State to carry out its obligation regarding one of the most heinous crimes which has happened on a very large scale. On the other hand, there is also the issue of the failure of the Sri Lankan society as a whole of acting so indifferently on an issue of such civilizational importance. It is not possible to consider the enforced disappearances as something that has happened at one time which has no relevance for today. There is a deep wound created within the Sri Lankan culture by the serious neglect of civilizational norms and this wound is festering. As a result of this deep moral crisis which exists within this society, the problem of enforced disappearances poses a problem not merely to the disappearances of persons but also to the disappearance of the moral foundation of the society. When the moral foundation breaks down that way, it also creates a serious undermining of the legal foundation of the country. Today, a situation has arisen where getting the law enforced on any matter has become a seriously difficult problem. When a society fails to act collectively against the heinous crimes that have happened within that society, it also becomes incapable of maintaining its moral foundation and also the very civilization itself. The failure of the State as mentioned above and also the failure of the society on this matter remains at the bottom of many of the questions that are faced in Sri Lanka today. The result is that on many matters of human tragedies which affect various individuals and groups of persons, it has become difficult to develop a collective reaction to resolve the problems associated with such tragedies. From all this, the question that arises is as to what is the future of law and morality in Sri Lanka? These problems will define not only the nature of the present generations of people living in the country but also it will affect the future generations in terms of their intellectual development, mental development, the development of their emotional capacities and all aspects of their human capacities. When the legal system becomes distorted in every way, the cultural basis of society also gets distorted in the same way. The people who often boast about the greatness of the country know within their own hearts that despite such rhetoric, there are deeply troubling human problems that the Sri Lankan society is faced with within it. The extent of demoralization that has been caused by this large scale causing of disappearances has spread now into many other crimes. If we take as an example the attack on the persons who went to worship in churches on the Easter Sunday of 2019, this demonstrates how ineffective the Sri Lankan society has become in the prevention of very serious crimes despite having prior knowledge of the possibility of such a tragedy occurring. The subsequent failure to provide a proper and satisfactory criminal investigation also confirms the problem discussed above. Whatever appearances of actions that may be taken, given the background that exists in the country in terms of the crisis of the legal system and the moral foundation of the country, a satisfactory solution to such even greater crimes cannot be found. Thus, the day of commemoration of the disappeared must be a day on which to deeply reflect on the consequences of enforced disappearances on the legal foundation of the country and also the moral fabric of the society.

As immediate steps to be taken we recommend the following;

· Families of the disappeared want truth and justice for their loved ones.
· The Sri Lankan authorities must prosecute those responsible for the continuing crimes of disappearances.
· The promised Rs 6000 monthly interim relief should be made.
· The chairman of the OMP should be removed.
· Two monitoring committees of family members and Civil organization representatives should be appointed to monitor the work related to disappearances.
A Family member and a Civil representative should be given at least observer status in the OMP commission.
· Government should stop the abductions ( The first step of disappearances) that happened recently without continuing it.
– The right not to disappear should be included in the constitution and should be made a fundamental right.

A webinar on enforced disappearances in Sri Lanka will be held on the 3rd of November 2021 at 2 PM Sri Lankan Time. You are welcome to join. Click here to Register.

INDONESIA: Men who allegedly stole a mobile phone brutally attacked and prosecuted by the Police »