INDONESIA: How serious is the Government in implementing Sustainable Development Goal (SDG) Number 16?

On 25 September 2015, the General Assembly of the United Nations (UN) adopted a Resolution entitled “Transforming our World: the 2030 Agenda for Sustainable Development.” Two years later, the Government of the Republic of Indonesia issued Presidential Decree, Number 59, of 2017, concerning the Implementation of Achieving the Sustainable Development Goal.

“No one left behind” is the main principle of implementation of the Sustainable Development Goal (SDG).

The above-mentioned principle strengthens non-discrimination. It will not leave anyone behind. Included are, vulnerable groups, victims of past human rights violations, indigenous peoples, and religious minorities, which are specifically found in SDG’s Goal Number 16 on “Peace, Justice and Strong Institutions”.

However, will the principle apply in Indonesia? Will the Government include victims and families of victims of human rights violations in the implementation of SDG’s? Following are the questions that remain. 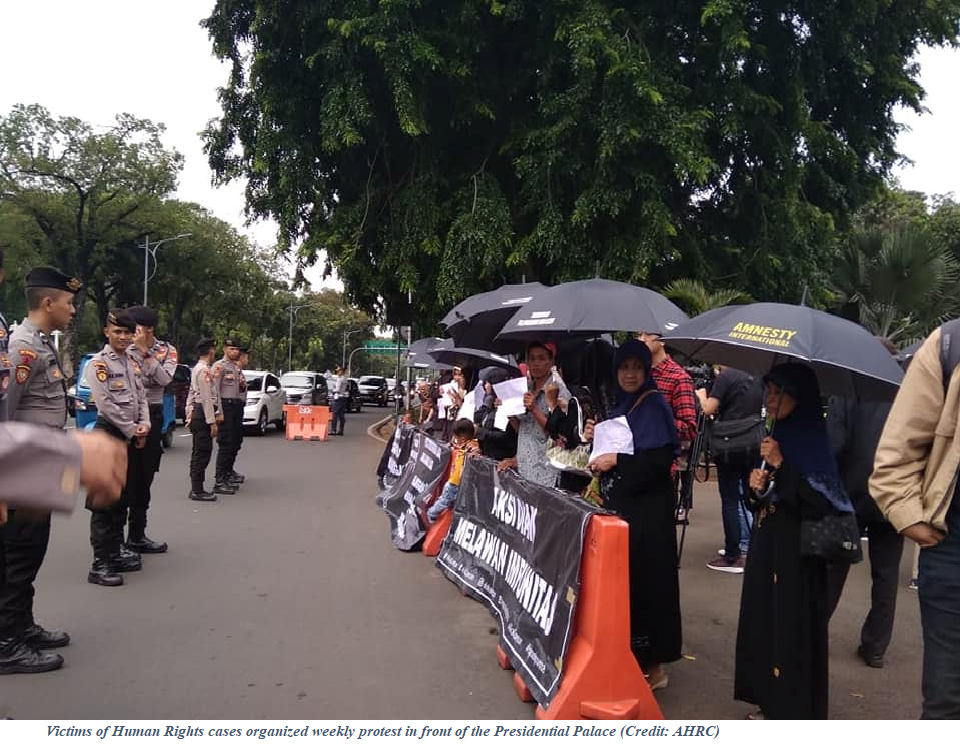 The Legacy of human rights violations, under the dictatorship of President Suharto, 1966 – 1998, still becomes homework which has yet to be resolved. These include the following six (6) items; 1965-1966 massacre, 1981-1983 mysterious shooting case, 1984 Tanjung Priok massacre, 1989 Talangsari Lampung case, 1998-1999 students shooting of Trisakti and Semanggi, and enforced disappearances of student activists between 1997-1998.

In addition, there are cases of human rights violations, which occurred during military emergencies in Aceh Province between 1989 and 1998 and elsewhere in 2003.

Meanwhile, what is the human rights situation in Papua and the West Papua Provinces, after Suharto stepped down in 1998? Various cases of violence are still taking place. There are instances of intimidation, racial discrimination against indigenous Papuans, forced dispersals during peaceful protests, torture, arbitrary arrests with detention and extra-judicial killings.

Moreover, indigenous Papuans who live in other islands of Indonesia are also targeted for persecution. Here are two examples: 1. an attack on a Papuan student dormitory in Surabaya city of the East Java Province. 2. arrests and forced dissolution of a peaceful protest by Papuan students and human rights activists in Jakarta in October 2019.

The Asian Human Right Commission (AHRC) notes freedom of opinion and expression in Indonesia face a shrinking public space. Recently, the Police enforced the ITE Law to challenge the right to freedom of expression. An instance in the case, is that of Mr. I. Gede Ari Astina, alias Jering, a drummer of a local music group, named Superman Is Dead (SID). Mr. Jerink, detained in Police custody, is currently under trial in the Denpasar Bali District Court. Jerink was charged under the ITE Law due to his criticisms written in his social media wall defaming the Indonesian Medical Association (IDI).

He wrote, “Because they’re proud of being the WHO’s flunkeys, the IDI and hospitals arbitrarily mandated that anyone who is about to give birth be tested for COVID-19”. Jerinx wrote this on his Instagram account, @jrxsid, on June 13, 2020–“There is so much evidence that the test results are inaccurate, so why force it? If the test causes stress or death for the baby or mother, who will take responsibility?”

Another element that still frequently occurred is in Blasphemy Law cases. According to the Indonesia Legal Aid Foundation (YLBHI), until May 2020, there were 38 cases of Blasphemy Law complaints that occurred in Indonesia. According to YLBHI, there is a new trend going on. It is that most of the accused persons reported to the Police are only 18 years old! Many of them reported, are due to the use of a “Tik Tok” application, with the content allegedly opposing Islam.

Currently blasphemy cases are targeting children from 4 to 16 years old. There are generally 4 Articles that are often cited. These include Article 156a of the Indonesia Criminal Code (KUHP), Article 59 Paragraph (3) of the Mass Organization Law, Article 28 Paragraph (2), Article 45a Paragraph (2) of the ITE Law.

The AHRC stresses that it is important, to ensure the seriousness of the Indonesian Government in implementing SDG’s Number 16, concerning peace, justice and strong institutions. The implementation must be in line with human rights protection. Thus, the Government must prioritize reforming judiciary mechanisms and ensuring access to justice. This means justice seekers in particular. Victims and families of victims of human rights violations have all been fighting against impunity for many years.

Last but not least, the AHRC urges the Government of Indonesia to ensure accountability in the cases of gross violations of human rights. One of the fundamental principles of accountability is that they ensure all perpetrators and offenders of gross violations of human rights must be prosecuted under the Rule of Law without delay. The Government should seriously be aware that implementing SDG’s 16 is nothing and it is not going anywhere without ensuring justice and therapies for victims and their families. It ensures that all perpetrators of human rights violations will not enjoy impunity. If accountability is established, it will bring significant milestones to end IMPUNITY in Indonesia and significant achievements under the implementation of SDG’s Number 16.

INDONESIA: Interview Regarding Progress of Local TRC in Aceh »