Although the right to education is a fundamental human right recognised throughout the civilised world, girls in Pakistan still have to fight for the right. Many even lose their life in this battle, such as 17-year-old Saqiba. A student of the Government Girls Degree College in Muslim Bagh, Balochistan, Saqiba Hakim Kakar committed suicide on 12 February 2016. Saqiba allegedly consumed hair dye because the college principal had refused to send her examination form to the Board of Intermediate and Secondary Education. Her only crime was that she had organized a protest in Quetta against the shortage of teachers in her college.

In her last letter addressed to the principal Saqiba wrote in Urdu language; 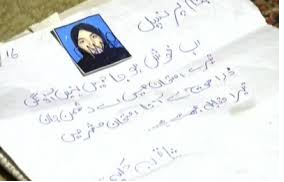 Saqiba and 12 other girls were suspended from sitting their intermediate final exams by Principal Abida Ghous, allegedly for staging a demonstration outside the Quetta Press Club in June 2015, demanding resumption of classes at their institution. Saqiba’s father was called and asked to offer apologies; despite his apologies, the principal did not change her stance.

According to the post mortem report, Saqiba consumed hair dye that caused her kidney and heart to stop functioning, leading to her death. Following the incident, a three-member committee was formed by the Provincial Education Minister Raim Ziratwal, to probe the matter. Saqiba’s family has rejected the enquiry committee and demanded a judicial probe, on the grounds that the principal and clerk of the college belong to the same political party as the Education Minister. The girl’s family has filed an application at the Muslim Bagh Police Station to register an FIR against the college’s principal and clerk. To date the FIR has not been registered; according to a police officer, they are waiting for the enquiry report into the incident.

Principal Abida Ghous had cancelled classes because there were no female teachers at the school; the principal had removed male teachers who had been teaching in the institution for the past 18 years. For six months, Saqiba and other students had protested outside Quetta Press club demanding that their classes be resumed. Saqiba told the reporters covering the protest that despite parents having held meetings with the college administration, classes remained suspended. The video of the interview can be viewed here;https://www.youtube.com/watch?v=3L-AaHPy8Jk

All the girls who staged the protest were not allowed to sit their final exams. After they submitted formal apologies, the school administration pardoned all students except Saqiba, who in her disappointment, took her own life.

Saiqiba’s suicide has brought to fore the regressive trend in Pakistan when it comes to the education of girls. The female literacy rate in Balochistan is counted among the lowest in the world. According to a report, 70 percent of females are out of school in the province for various reasons. Moreover, the province has a total of 1.7 million children who are out of school.

Unfortunately, Principal Abida represents the militant mindset—becoming alarmingly acceptable—that a girl’s education is “haram” (illegitimate) in Islam. As education, especially female education, counters militancy, militants are threatening girls not to attend schools. Like Boko Haram, an underground Islamic militant group named Tanzeem-ul-Islami-ul-Furqan (TIF, Organization of Islam and the Holy Standard) has recently threatened and issued warnings to abandon girls’ education institutions in Panjgur district, Balochistan. This terrorist outfit has issued pamphlets warning all private schools in the district to shut down girls’ education or face the consequences. Armed men of TIF attacked and burnt a school van of the Oasis School carrying female students in Panjgur on 14 May 2015.

It is undisputed that there is a growing process of “Talibanization” in Balochistan. According to Baloch Leader Dr Abdul Hayee, former president of the National Party, the situation is being deliberately created in order to malign the Baloch political movement internationally. The government and law enforcement agencies deem privately owned schools by Balochis as nurseries of insurgency, while allowing religious militants to run their own recruitment centers. The state has done nothing to rebuild schools attacked by militants in Balochistan.

Under the heading, ‘Promotion of social justice and removal of social evils’, Article 37B of Pakistan’s Constitution requires that the state “remove illiteracy and provide free and compulsory secondary education within minimum possible period.” Under the recent 18th amendment, sub-clause 25A further mandates that, “The State shall provide free and compulsory education to all children of the age of five to 16 years in such manner as may be determined by law.”

The Balochistan government has already declared an education emergency in the province and enforced article 25A of the constitution. Despite the state’s declaration to this effect, why must the girls of the province still lose their life and dignity, and be forced to bow down to the likes of Ms. Abida?

The Asian Human Rights Commission urges that a judicial enquiry be initiated against Principal Abida. She should be punished for the heinous crime of being vengeful and vindictive against a bright student. Those responsible for Saqiba’s death must be held accountable.