Personnel from the Pakistan Rangers have used brute force against unarmed protesters, causing the death of three Pakistan International Airlines (PIA) employees, who were out protesting against the privatisation of the State owned airlines.

The dead include Zubair Ahmed, Manager HR department, Saleem Akbar, I.T Engineer, and Inayat Jafri, a senior officer.The demonstrators assembled peacefully and there are no reports of any act of violence having been committed by them. The protestors were exercising their constitutional right to assemble peacefully, which is guaranteed under the ICCPR. 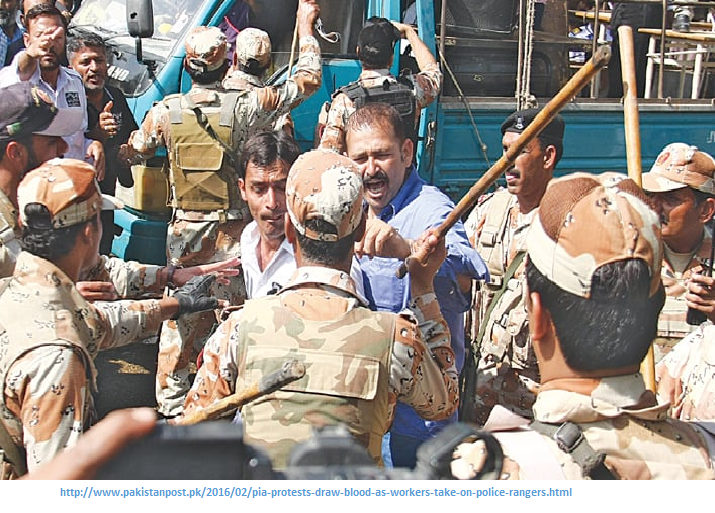 The Chairman of PIA, Mr. Nasir Jamal, has resigned from his office in protest against the killings of his employees.

Additionally, more than 30 persons, including journalists and two women, were injured as Ranger personnel use batons, rubber bullets, and water cannon to disperse the crowd.

The government’s decision to sell the once profitable national carrier for peanuts was severely opposed by PIA employees throughout the country, who had called for a strike on February 3.

The shameful incident arrives a day after the Prime Minister enforced the Essential Services Maintenance Act, 1952, for six months, in an effort to block the impending strike. The law restricts activity in State-administered sectors and imposes fines, punishment, or both, on any employee who refuses to work.

According to ARYnews’ senior anchorperson Arshad, Secretary of Aviation, Mr. Irfan Elahi, asked the authorities to use the ‘armed attack’ option to disperse the protesting PIA employees. The protest spot was washed with the help of water cannons, shortly after the firing on PIA workers. Mr. Elahi is the same man who was Commissioner (DCO) of Rawalpindi City, when former Prime Minister Benazir Bhutto was assassinated in 2007, and someone who ordered the site of the attack to be hosed down, eliminating all evidence.

The State tactic of brute force against unarmed protestors is unfortunately old hat. Earlier, in the Model Town Incident, also known as the Lahore Massacre, security officials shot down 14 demonstrators of Pakistan Awami Tehreek (PAT); this included women. The incident happened, allegedly, on the orders of the Punjab government, which is run by the younger brother of the current Prime Minister.

It was reported that several police officials went to the hospital where the wounded were being treated, and altered the medico-legal certificates of the injured police officials to show “fake bullet injuries”, in order to justify their claim that PAT workers also shot at the police.

It comes as no surprise that the Joint Investigation Team (JIT) formed to investigate the matter absolved the provincial government and the security officials of all charges, leaving the victims in a lurch.

Just a day before the incident, the Federal Information Minister threatened the protesters that if they choose to protest, their wings will be cut down, and they will be retrenched from their employment, and no power will bring them back. Despite the Rangers having already been given full impunity, ministers are hinting at giving more power to the almighty agencies.

The government appears to be venting its frustration on hapless citizens, who mean no harm, instead of targeting terrorist and militants. Imposing essential service maintenance on employees is no way to redress the affected employee; the State could have negotiated with the Airlines staff to come up with a sustainable plan to minimize economic loss for both the employer and the employee. The use of force has only added fuel to the fire, complicating the matter further.

Privatization of national assets, including PIA and steel mills, has been viewed with suspicion since the idea was floated. PIA’s 15,000 employees are at risk of being laid-off from their jobs should the Airline be privatized. The State, being the employer, is responsible for the wellbeing of its workers; instead the government is acting as a silent bystander while its innocent employees are being murdered in cold blood. Many of these workers have served the national airline for decades, and their services are being repaid by drawing their blood.

A state of anarchy that has ensued since the implementation of the National Action Plan has paved the way for atrocities, as a result of the unbridled power given to the agencies entrusted with the responsibility of maintaining law and order in Pakistan.

The State must stop adopting dictatorial tactics to silence democratic rights of protest. The AHRC condemns the killing of protesters by direct shooting, allegedly by the Rangers, expresses solidarity with the victims, and supports the just cause of the protesters.

« MYANMAR: A state that requires the foundations for justice institutions to be built to achieve a stable change

INDIA: From Khairlanji to Hyderabad: what post-outrage? »