Barely one and a half months into this year, eight terrorist attacks in different parts of Pakistan have claimed at least 50 lives, including of 24 security officials. The tall claims of the government and military establishment of breaking the back of terrorism are a shambles. Pakistan, with the world’s sixth largest army and more than 19 intelligence agencies, is left vulnerable and reeling, month after month, by these terrorists that it supposedly defeated. 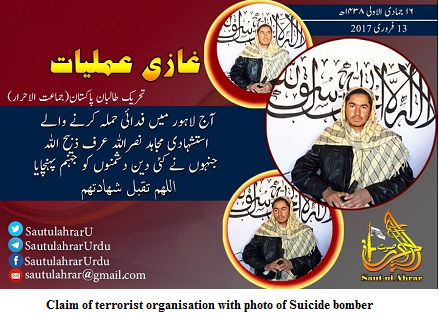 On February 13, nearly a year after the Iqbal Park, Lahore carnage that killed more than 70 people, terror struck in Lahore again. Sixteen people were killed, while 62 were injured, including two senior police officers. Both the bombings were claimed by Jamaat-ul-Ahrar, a splinter group of Tehreek e Taliban Pakistan (TTP). The attack occurred directly outside the Provincial Assembly, when the Lahore chemist association members were protesting against the Punjab government’s proposed bill to halt sales of counterfeit medicines.

Also on February 13, two members of a bomb disposal team were killed in Quetta, while trying to defuse a device.

All these recurring incidents of terrorism testify to the failure of the Pakistan government’s counter terrorism strategy. While the state’s apathy is no secret, its inability to stop the loss of life is inexcusable.

According to media reports, the National Counter Terrorism Authority (NACTA) had already warned the provincial authorities of a possible terrorist attack in Lahore. In a notice sent to Punjab’s Home Secretary, Provincial Police Officer and DG Pakistan Rangers (Punjab) on January 7, NACTA had directed for vital installations including important buildings, hospitals and schools to be put under strict vigilance. Furthermore, NACTA had warned the police and other law enforcement agencies of a possible suicide attack in Lahore twice; first on 16 December 2016 and then on 7 February. In subsequent raids, three terrorists were arrested from Islampura and Ravi Bridge areas, who revealed during investigations that their accomplices had entered the city to carry out an attack. 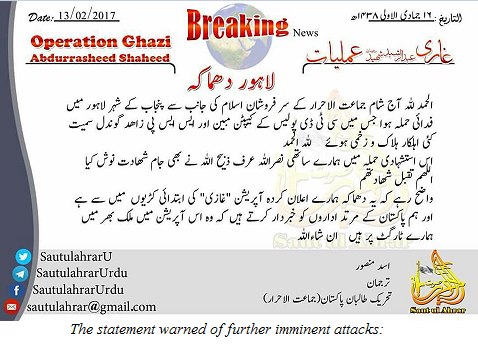 The attack in Lahore was claimed by the TTP splinter group via a statement on their Facebook and Twitter pages. The spokesperson for Jamat ul Ahrar, Asad Mansoor, stated
“Today the valiant soldiers of Jamat Al Ahrar attacked Lahore and killed CDC police officer Captain Mobin and SSP Zahid Gondal among others, Lord be Praised. Our friend Nasruallah was martyred in the jihadist attack.”

“It is stated that the attack is the first in our line of series of operation Ghazi and we warn the infidel security establishment of Pakistan that we shall target them whereever they are in the country.”

It is surprising that despite the state’s crack down on hate speech, as enunciated in its National Action Plan, Jamat Al Ahrar’s Facebook and Twitter pages were not blocked until after the Lahore attack, while progressive liberal pages are blocked and their authors disappeared. That the statement was posted online reveals the extensive network and social media presence of the banned group; so why is the state not taking any legal action?

Although comparatively safer than other cities of Pakistan, Lahore has witnessed mass killings from suicide and bomb attacks. The city has witnesses a surge in casualties, despite being a stronghold of the ruling Muslim League.

The state’s failure to initiate operations against the Punjabi (Pakistani) Taliban has allowed splinter groups to form, to grow and to strike at will. Despite clear warnings of the imminent attack, the state failed to prevent the group’s attack inside a high security zone. By attacking in front of the Parliament, the terrorists have clearly indicated their capacity to strike when and where they wish.

Until the Pakistan state gets its priorities right, Islamic militancy can never be eliminated. Only by standing firm against all militants, rather than color coding them as extreme black, black and grey, can the state win the war against terror. It is perplexing that while the state deals with liberals and progressives with an iron fist, it allows militants to go scot free. Since the 1970s Afghan War, the love affair between the mullahs and the military is ongoing. The Peshawar carnage, the attack on Bacha Khan University in Charsadda, Khyber Pakhtunkhwa province and several other attacks on military and law enforcement installations should have signalled an end to the nexus, but a lack of political will and internal conflict has left the state unable to decisively resolve the matter.

The Asian Human Rights Commission (AHRC) condemns the loss of live and expresses its condolences to the aggrieved families. The state should immediately form a high level commission of independent members to assess the situation and identify the security lapses. The officials who are found to be guilty of wilful neglect should be identified and prosecuted to set an example for others.

PHILIPPINES: Statement of the National Fact Finding Mission on the HTI tragedy »