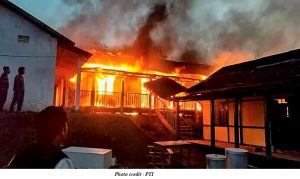 The state of Arunachal Pradesh is seeing protests for the second time this year. The first wave of protests and violence had come with the government’s ill thought out Citizenship Amendment Bill (2016), which promised to give Indian citizenship to some minority communities fleeing persecution in Pakistan, Bangladesh and Afghanistan, with much-relaxed rules. The move was vehemently opposed in all the seven states of India’s North East, with fears it would change the region’s demography and adversely affect indigenous ethnic communities. The opposition was so fierce that finally the Union Government left the bill to lapse.

The second wave of protests are a result of yet another ill thought move by the BJP government to grant Permanent Resident Certificates (PRC) to six nonnative communities that have been living in Arunachal for decades without taking the indigenous communities of Arunachal into confidence. The communities are Deoris, Sonowal Kacharis, Morans, Adivasis and Mishings living in Namsai and Changlang districts and Gorkhas living in Vijaynagar. Many of these communities have roots in neighbouring Assam and enjoy Scheduled Tribe status there. Ethnic Arunachalis believe that the PRC status to these communities will adversely affect the rights and interests of the indigenous people.

To address this long standing and genuine demand for a PRC by these communities, in order to prove domicile status for various education and employment benefits, the Arunachal government reconstituted a Joint High Power Committee (JHPC) from 2011, with a January 2019 deadline to settle the issue of non Arunachal Pradesh Scheduled Tribes (APST) communities. The JHPC met several times but failed to reach a consensus and convince several of the stakeholders, despite very encouraging responses, such as the powerful student body, All Arunachal Pradesh Students` Union (AAPSU) agreeing to grant PRC to these communities on the condition that they were be limited to use for domicile and education needs.

Instead of building on this breakthrough and convincing the remaining stakeholders, the JHPC squandered the gains and finally, just ahead of the deadline, apparently recommended the granting of PRC to the six communities, without taking the APST community leaders in confidence. The timing of the move was read by many as an electoral ploy to help the ruling party in the upcoming assembly and general elections. This led to an outbreak of violence in the state which has by now claimed two lives in police firing, and left several houses and vehicles burnt, including that of the deputy chief minister. The violence forced the government to retreat from its PRC decision, which in turn infuriated the non-APST communities.

Authorities, politicians and political parties must realise that governance is not a game of chance or to be based on whimsical policymaking. It requires serious and sensitive engagement with all the stakeholders, helping them to understand each other and agree to the genuine needs and demands of the communities. The failure of good governance has placed Arunachal Pradesh in turmoil. The government should swiftly take some confidence building measures and grant the PRC to non APST communities without infuriating others.

INDIA: Country must bring its missing children back »