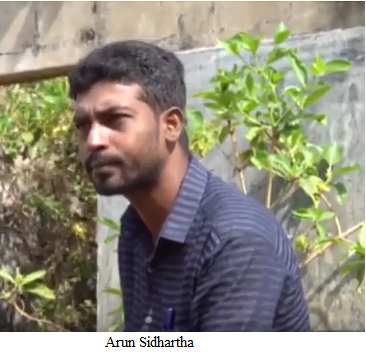 The Internet broadcasted the long interview with Arun Siddhartha by Hiru on TV and separately on the YouTube channel, Vishwa Karma. One perspective that comes out of Arun Siddhartha’s reflections can be enormously positive. It can be used in trying to understand ways to resolve the present prolonged crises which have dragged the country into anarchy.

The most important insight of Arun Siddhartha is that the situation faced by the entire country is the crises of a whole people, not just merely a crisis of one specific group or another. Polarization exists because one group of victims of the present crises and others who are causing them have been the main difficulty in sharing any kind of dialogue. The question is how to get out of the miseries that everyone is suffering. Therefore, this bold statement by Arun Siddhartha is highly appreciated.

Of course, this is not a new idea. Almost everyone in their heart of hearts knows that Sri Lanka’s crises are ones of the entire political system. It, in turn, is a product of crises of the whole political culture. It affects everyone in the same way. Exploitation of these crises by unscrupulous politicians and others has exacerbated the situation. Nonetheless, the entire political culture requires scrutiny if positive change is to be achieved.

The Asian Human Rights Commission, on its own, came to this conclusion in the nineteen eighties. They consistently presented this point of view. This is why the AHRC never supported the war efforts of either side. They followed their instincts towards a solution. It surfaced as a consideration of all the total crises of all the basic systems that make up the nation of Sri Lanka.

Arun Siddharth’s point of view requires great attention on the part of concerned persons. But, for the time being, we select one issue that he appears not yet prepared to deal with. He was asked by the interviewer, where do we make a beginning towards a solution for every deepening crisis in Sri Lanka? This question may find different answers from different ideological groups. However, the problem should focus on the fact that this is a crisis of the State rather than crises of various factions living in the Country.

It is the State that creates the necessary foundations for civilized living in a country. Thomas Hobbes may have gone a little too far in attributing all the power of social control to an all-powerful entity, which he named “Levithan”. However, that absolute entity could function within a democratic framework in which the functional State basically protects the rights of every individual living in a territory established by on-going centuries. It is to this all-powerful democratic entity that we now call the State. What we have in Sri Lanka is primarily a crisis of the State.

The task facing anyone who is seeking a solution to the crises of the State is this. First of all, identify the crisis like that of the State and not about a group of people or even about politicians. Once this is agreed upon, the solution becomes clearer.

The crises of a State can be alleviated only by reshaping or reforming the existing State apparatus. The crisis of State institutions has deteriorated to such an extent in Sri Lanka that it cannot function as a State any longer. If all the organs of a Human Body become so dysfunctional, it cannot any longer function to sustain the Human Person. It is that kind of situation that Sri Lanka is facing.

An ultimate solution lies now in reshaping the mainly dysfunctional Sri Lankan State. The post-independence adventures in the political field have brought the Sri Lankan State to this impasse. Both the 1972 and 1978 Constitutions were in fact aimed at dissolving the State apparatus, which was created at Independence on the recommendations of the “Soulbury Commission”. Particularly J. R. Jayawardena’s Constitution was to place him as the State. All organizational structures that obstructed that absolute power of the President, was dissolved by all sorts of tricks. J. R. Jayawardena is a political magician who could hide what he was really doing by pretending. He wanted to give the impression that, more or less, no big change had taken place. A magician is not a creator. Thus, existing institutions were destroyed and positive institutions were not created in its place. The Magician ultimately left behind chaos and this chaos we now call the Sri Lankan State.

This crisis of the State is the crises of an entire people. To put one’s house in order is the starting point of any recovery. All kinds of ideological debates plus the solving of problems on the basis of an ethnic solution are all colossal solutions.

In the re-making of the State, reform in Sri Lanka should begin with the reform of the Justice sector. This includes police, prosecution, judiciary, civil service et al. The State machinery should exist so that any politician should be able to move it. When the appropriate machinery does not exist, the politician may then come up with such things as minor frauds. These self-serving individuals ultimately believe that the only use of their electoral victories is to make themselves rich by corrupt means. Corruption in Sri Lanka is not an exception but the norm– the normal state of affairs.

Arun Siddhartha is correct when he says the solution must come from the people. This is so, given the nature of the crisis which is a crisis of the State. It is only the people who could come forward to reshape the thinking of these types of politicians. So, by widening the debate among the people, creating a solid focus on State and electoral reform, it could surface the kinds of people who would do what the people want in terms of genuine solutions to their serious problems.

It is time for all to join in this debate which Arun Siddhartha and others are raising. The future of Sri Lanka will depend on how much active participation people will take in pursuit of this debate.