30 years ago, Richard de Zoysa was abducted and disappeared. His dead body was later found on a beach. During the same period, literally tens of thousands of persons throughout the country were also disappeared, and none of the cases relating to such disappearances have been resolved through genuine investigations and prosecutions. Indeed, the process of causing such disappearances by the state fundamentally changed the practical reality of the country’s legal system. 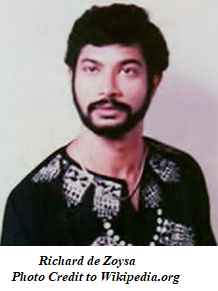 Richard de Zoysa was a well-known journalist, poet and actor. His case received a great deal of media attention in Sri Lanka and internationally, both due to him being a well-known young activist and celebrity, and also due to the tireless efforts of his mother. The details about his killing, and his mother’s search for justice, were written about widely.

This death and what followed remains an issue of great importance, not only regarding his case but also as a reflection of the culture of impunity that has become an entrenched part of the Sri Lankan justice system, with enormous societal implications. It is well established that Richard de Zoysa was abducted by a team of police officers, tortured and later killed. His body was dumped at the sea from a chopper, with the killers believing that this would mean his body would be hidden and the murder would never be found out. However, when the body floated onto a beach, people recognized him and the matter was reported out. His mother, a medical doctor, famously stated, “I was lucky that my son was brought back to me by the sea.” She was referring to the fact that in tens of thousands of other cases the parents, families and loved ones of the disappeared did not ever get to know where their bodies were buried or disposed of.

There are two very simple facts arising from these largescale disappearances: The first is that, as government appointed commissions of inquiry into involuntary disappearances have clearly demonstrated, large numbers of killings happened after the victims were arrested by law enforcement agencies. The only logical conclusion to arrive at is that these enforced disappearances were a result of an approved government policy. The fact that there was state involvement in the sanctioning and carrying out of killings of arrested persons has resulted in the complete impossibility of getting any kind of credible criminal investigation and prosecution into these murders, which are camouflaged under the term enforced disappearances.

When a state deliberately approves and carries out large-scale killings of arrested persons, all the fundamentals of the justice system are violated. The issue that should be raised in the murder of Richard de Zoysa and tens of thousands of others is about murder that has been carried out with the state approval and the state supervision.

When looked at from that point of view, the collapse of the basic legal administration of Sri Lanka is no surprise. If Sri Lanka is to return to being a country that respects the rule of law and defends the security of the people, the first step that needs to be taken is to acknowledge the state’s culpability in these murders and to take appropriate actions in order to reassure the people that everything will be done to ensure accountability and to prevent any recurrence in the future.

« SRI LANKA: How can unscrupulous lawyers manipulate delays in the law?

SRI LANKA: Second Anniversary of the establishment of the Office on Missing Persons »