Home / News / PAKISTAN: Sessions judge and his wife must be prosecuted for employing and torturing minor

PAKISTAN: Sessions judge and his wife must be prosecuted for employing and torturing minor 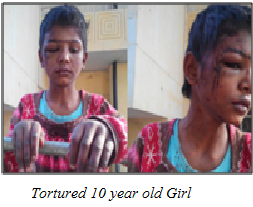 A 10-year-old child working as a household help was tortured by her employers, an Additional Sessions judge and his wife; the girl has been severely injured. The judge has used his influence and position to settle the case outside the court with the father of the maid.

The Chief Justice of Pakistan took suo motto cognizance of the torture and wrongful confinement of the 10-year-old girl. However, since then the girl has gone missing.

The juvenile, Miss Tayyaba, was kept detained in wrongful confinement in the official residence of this Sessions Judge in Islamabad, Sector 9/1. Tayyaba’s employers, Mr. Raja Khurram Ali Khan and his wife, accused her and punishing her about a missing broom and forced her hands onto a burning stove; she was also beaten with a ladle; she received deep injury to the forehead, close to her right eye.

The story of the tortured girl came to light after pictures of torture marks made rounds on social media. The police immediately took action and recovered the girl from the judge’s house. Then, she was immediately shifted to Faisalabad, Punjab, 600 kilometers away from her employer’s home.

A neighbor had informed the Child Protection Bureau about the screams and cries of a girl that had been heard for many days, emanating from the house of the Sessions judge.

The police were informed. When the police first visited the house, the judge and his wife told the police that the help was not at home; but after some hours they informed police that indeed she is at their home.

The maid was produced before the Court of the Assistant Commissioner, Ms. Nisha Ishtiaq, where Tayyaba recorded her statement under 164 of Criminal Procedure Code (CrPc). She spoke about her torture, about the burning of hand, about her being kept in wrongful confinement in a storeroom, and about her being beaten by sticks.

A case against the wife of the judge was filed, but within six days the judge forced the father of the maid to settle the charges out of court. The maid’s father appeared in court today and said that he forgave the judge and his wife and had no objection to the court granting bail to the suspects.

A compromised police nexus meant that the girl has been allegedly forced to change her statement; she now said that she was not tortured; and that she had fallen down the stairs and hot her head to get injured to her forehead; and that her hand had been burned because she had also fallen down near the stove.

The police have also not produced her in front of the Medical Board at PIMS Hospital, Islamabad, in contravention of the orders of the Chief Justice. Furthermore, in a clear ruse to spread disinformation and confusion and divert attention from the vicious attack on the girl, two ladies have come forward to claim that the victim is their daughter. This is an open attempt to shift the focus from what is a serious crime, involving a judicial officer and his family.

Though the wife of the judge was released, to date no case of abduction, torture, or wrongful confinement of the minor maid has been filed against the judge or his wife. The government and police have failed to initiate an inquiry against the judge for keeping a 10-year-old girl as a domestic servant, i.e. for violating Pakistani law, according to which no one can keep a child of below 16 years as domestic servant. Additionally, settlement outside the court is not permitted in cases other than murder cases. But the Faisalabad Sessions Court has exonerated the judge and his wife after receiving the settlement.

The Chief Justice of Pakistan, after the first hearing today, January 6, deferred the next hearing for January 11, and asked the police to produce the girl on the next date. The Chief Justice has also not taken any action against the judge and his family for hiring a minor as a domestic helper and torturing her in wrongful confinement, making a mockery of justice in the face of overhwhelming evidence.

The case also points attention to the larger issues of labour, domestic labour, and child labour in the country. Labour laws in Pakistan are ineffective and inefficient at curbing the practise of child labor. When a judicial office – a guardian of law – it itself abetting child labor, hiring an underage girl child as domestic help, how can one expect the general public to be any different?
Taking advantage of poverty, influential torturers get away even with murder by paying the aggrieved family hush money. The practice of paying hush money as compensation to the underage maid is fairly is common in Punjab where most of the cases of abuse of domestic servants occur. Urban areas are particularly notorious for the practice.

The families of the victim are too poor to take the employer to task; resultantly, in almost all cases of abuse, the abuser is “pardoned” by the heirs. Having many mouths to feed the family often forces the victim to continue to work at the house of the abuser.

The State, having failed in its duty to provide shelter and basic necessities to the downtrodden is to be blamed for the unravelling of the moral fabric of the society. The Institute of Social Justice reported 29 child house workers’ deaths from torture between 2011 and 2015. In 2013, 13 children died as a result of violence at their work place, in addition to 21 cases of physical torture by employers. According to SPARC’s Annual Report on State of Pakistan’s Children, 2015, there are 264,000 underage domestic workers confronting cruel and unsafe working environments, and often left to the mercy of employers who routinely subject them to physical and psychological abuse, exploitation, and violence.

The plight of child domestic workers is horrid in all the four provinces in the country and cases of torture are often noticed in the upper segments of society, where children are often coerced into working against their wishes. The torturers are often highly educated and belong to the upper or upper middle class. Each year many cases of domestic worker abuse are reported in the media; for instance, news such as: underage child worker is beaten to death or is injured, surfaces from time to time. Pakistan ranks number three in the world with the highest prevalence of child and forced labour, despite a significant decline in child labour numbers recorded worldwide, There were 25 million children out of school, out of which 15 million were, alarmingly, economically active.

The Constitution of the Islamic Republic of Pakistan does not generally distinguish between children and adults. Thus, there is a lack of specific provisions to penalize child abuse. Articles 11(3), 25A, 25(3) and 26(3), Art. 35 and Art. 37 pertain to abolishment of slavery, right to education, non discrimination, and protection of mother and child. There is no comprehensive children’s act in Pakistan, but provisions related to children’s rights appear in both general thematic codes and specific acts.

The Convention on the rights of the child (CRC) is not enforceable in Pakistan until there is enabling legislation to make them the law of the land. Pakistan has not introduced any such law with regard to the CRC, meaning that the Convention cannot be directly applied in the courts.

The Committee on the Rights of the Child has noted with regret that most legal provisions have not been sufficiently implemented, and expressed concerns “about the apparent lack of a legislative framework harmonized with the Convention in many areas.”

Domestic and other informal sector workers must be given access to social protection and their minimum wages must be regulated. The State should ensure the inclusion of the an informal sector representative in the tripartite mechanism and make amendments in the labour and the child labour inspection mechanism for adherence to the existing laws, child protection laws, and the Punjab Employment of Children (Amendment) Act, 2011.

The federal government must launch a national helpline that the people can call to report abuse. The absence of a legal framework under which domestic workers can protect their rights is unfortunate. The Pakistan State must make stringent laws on violence against domestic child workers.

The Asian Human Rights Commission (AHRC) urges the government of Pakistan to suspend the Additional District and Sessions judge, Mr. Raja Khurram Ali Khan, and prosecute him for hiring a minor and for committing acts of torture. His wife must be arrested immediately so that the judge and his wife cannot influence witnesses and the fellow judicial officers.

PAKISTAN: Call for safe recovery of four bloggers who disappeared after being arrested »