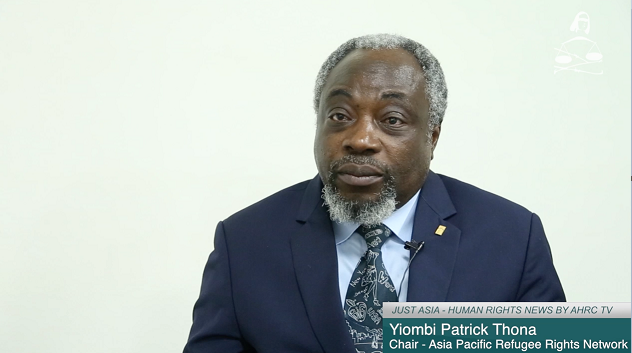 This week Just Asia begins with Burma, where four border police officers have been detained after a video went viral, showing them beating unarmed Rohingya men in the state of Rakhine. The video was posted to Facebook on Saturday and seems to show officers with military-grade weapons kicking two men, as another officer looks on passively. The incident occurred during a clearance operation in Koe Tan Kauk village on November 5. The village is near Maungdaw Township, the site of much of the recent violence against the Rohingya.

Next, Just Asia interviews Mr. Yiombi Thona, a former spy from the Democratic Republic of Congo. Mr. Yiombi arrived in South Korea in 2002 as a political refugee and currently teaches at Gwangju University. Mr. Yiombi notes that the problem of refugees is not the problem of specific countries, but something to be tackled by everyone. “The world does not belong to this or that community,” he says, “but to everyone.” He further expresses his disappointment with Burma’s Aung San Suu Kyi, for her silence and inaction on the Rohingya issue.

In Thailand, the bail bond of student activist Mr. Jatupat Boonphattharaksa was revoked by the Khon Kaen court on December 22. Mr. Jatupat was charged with lese majeste earlier this month, for sharing the BCC’s news profile of King Rama X. According to the Court, Jatupat’s bail bond was revoked because he had not deleted the post that had prompted the lese majeste charge against him, and he “continues to express himself through social media in a gesture to make a mockery of the state power showing disrespect to the law, causing damage to the nation…”

Next, 2016 was not a good year for Nepal regarding the protection and promotion of human rights. Rather, victims of human rights violations and their families suffered negligence and trauma at the hands of government security agencies and justice mechanisms. Just Asia speaks to Mr. Dipendra Jha, a practicing lawyer at the Supreme Court of Nepal, for details.

Moving to Pakistan, a 10-year-old child maid was tortured by an Islamabad Additional Sessions judge and his wife. Ten-year-old Miss Tayyaba was kept in wrongful confinement at the home of judge Raja Khurram Ali Khan. Her hand was burned over the stove due to a missing broom and she was beaten with a ladle. Although the case was taken up by the police and the court, the judge used his influence and position to settle the case outside the court with the girl’s father. The judge and his wife were acquitted of all charges.

In Indonesia, ten farmers from North Sumatera province are being tried in Balige district court since November, accused of destroying protected forest land. However, according to witness testimony, the land occupied by the farmers is not part of forest conservation land, and has been used by farmers since 1800. Rather, a plantation company is occupying protected forest land in that location. Both the police and the court have not taken any action against the company however.

Finally, the Urgent Appeals Weekly features two cases from Thailand and the Philippines.

« SRI LANKA: The job of a judge is to do justice, regardless of nationality

PAKISTAN: Sessions judge and his wife must be prosecuted for employing and torturing minor »