Home / News / NEPAL: On the International Day of the Disappeared, Victims Associations and Human Rights Organizations call for an end to continuing delays in justice for the country’s many victims

NEPAL: On the International Day of the Disappeared, Victims Associations and Human Rights Organizations call for an end to continuing delays in justice for the country’s many victims

While commemorating the International Day of the Disappeared 2020, the undersigned national and international organizations and groups of victims, in Nepal call on the responsible authorities to undertake immediate steps towards a reinvigoration of the TJ process, adopting a transparent and consultative process.

On this occasion, the victims’ groups and human rights organizations in Nepal commend the patience and resilience shown by the family members of those subjected to enforced disappearance during the 10-year-long internal armed conflict from 1996-2006. They have worked tirelessly advanced the TJ process (Truth, Justice, Reparation and Institutional Reform) in Nepal for more than a decade through their peaceful struggle, despite many difficult hurdles.

Although the Comprehensive Peace Agreement of 21 November 2006 between the government and the Communist Party of Nepal (CPN-Maoist), which formally ended the armed conflict, promised to make the fate or whereabouts of the disappeared public within 60 days, thousands of families have been being denied the right to the truth about these cases for the last 14 years. This has led to wider denial of, accountability, access to justice and effective remedy and reparation.

International law, including under treaties to which Nepal is a party, obligates States to provide effective remedies to the families of the disappeared and others harmed as result of the disappearance that includes truth, justice, reparation and guarantee on non-recurrence. These obligations under international law have been reflected in the Constitution of Nepal and have been reinforced by the Supreme Court in a number of cases. However, Nepal has not only failed to fulfilling these binding obligations allowing for near total impunity, it has also disregarded the concerns, fears, suggestions, and demands presented by the victims’ families, communities, and other concerned stakeholders.

The Truth and Reconciliation Commission (TRC) and the Commission of Enquiry on Enforced Disappearances (CIEDP), constituted in 2015, have both failed to deliver on their mandates despite the Commissioners being in their office for four years. This failure of the Commissions underscores the importance of respecting Supreme Court orders and international legal obligations. The right of victims to truth, justice, reparation and guarantee of non-recurrence will only be realized by establishing credible and independent commissions through wider public consultation, particularly with victims and civil society following international best practices.

In 2015 the Supreme Court found several sections of the TRC Act, including the one empowering the commissions to offer amnesty and facilitate mediation/reconciliation between victims and perpetrators, including those involved in gross human rights violations, to be unconstitutional and non compliant with Nepal’s international obligations. More recently, on 26 April 2020 the Court rejected the petitions of the Government to review and revise the 2015 decision.

To date, the Government has not initiated any effort to amend the law as per these decisions. Rather, it has been misusing these Commissions in a manner that has prevented victims from accessing remedies through the regular criminal justice system and has made no efforts to strengthen these Commissions to delivery their mandates effectively. Two years back, Nepal recognized enforced disappearance as a distinct crime for the first time when enacting a new Penal Code. While this step is commendable, these legal provisions have not ensured justice for victims, the police typically refuse to investigate cases from the conflict period, arguing that they come under the jurisdiction of the TJ mechanisms.

Despite civil society’s repeated calls to appoint the Commissioners after amending the TRC Act following wider consultations with victims and civil society, the Government recently appointed Commissioners under the same Act that the SC had deemed flawed five years ago. Moreover, the Government has not addressed the repeated calls and concerns regarding the political interference and lack of transparency in the appointment of the Commissioners and the overall TJ process.

Human rights organizations and many victims groups have lost confidence in and stopped supporting to these Commissions.

The undersigned organizations call upon the Government of Nepal:

To ensure the Commissions provide for, rather than delay and deny, truth and justice to victims;

– Start fresh consultations to amend its law in compliance international human rights law and Supreme Court directives, including by removing of amnesty for the perpetrators provisions;
– Appoint a new set of commissioners under the revised Act that respects victims basic right to truth and justice;
– Immediately ensure the social, cultural, economic, psychological and legal support suffered by the victims and families of enforced disappearance as part of victims’ rights to reparation;
– Revise the Penal Code to bring it in line with international standards. As a minimum, this should include: 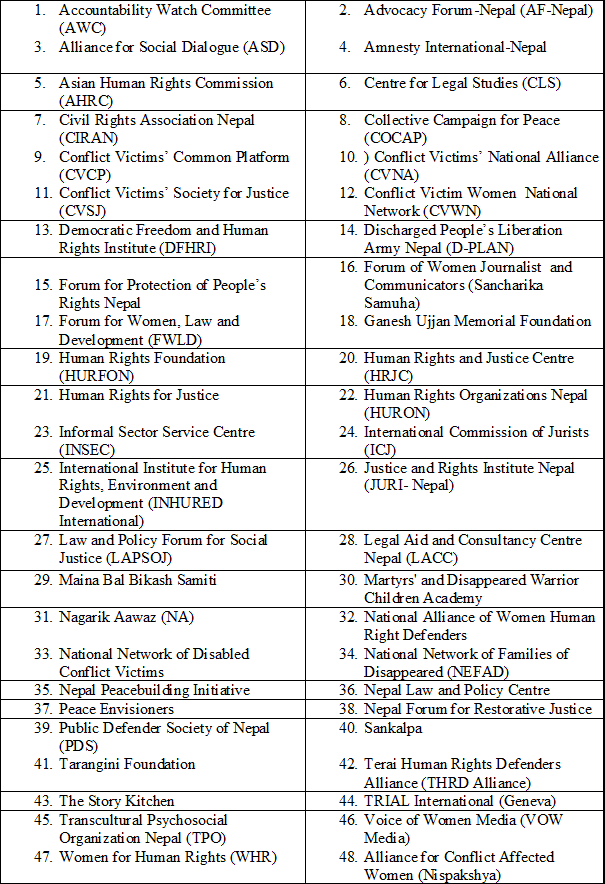