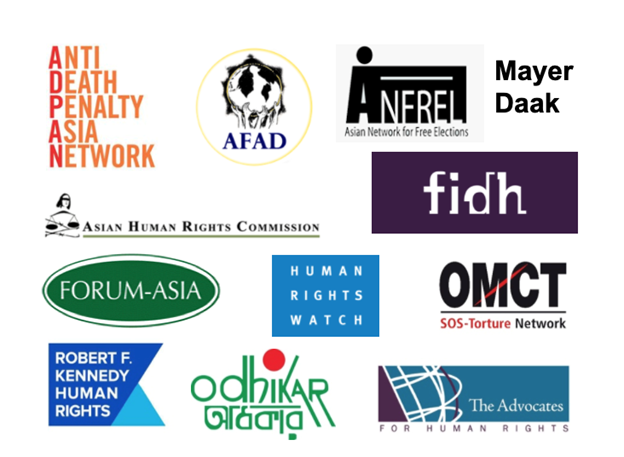 A Joint Statement by 12 human rights groups ahead of the International Day of the Victims of Enforced Disappearances, 2020

(Hong Kong) – Bangladesh security forces and law-enforcement agencies continuously commit enforced disappearances with impunity, targeting journalists, activists, and government critics, 12 human rights groups said today ahead of the International Day of the Victims of Enforced Disappearances. The groups remember the victims of enforced disappearances and stand in solidarity with the families of people who have been forcibly disappeared in Bangladesh and across the world.

Enforced disappearance – the deprivation of liberty by agents of the state and concealment of the fate or whereabouts of the person in custody – is strictly prohibited under international law. Despite consistent and credible evidence of their occurrence, the Bangladesh government continues to deny its unlawful practice of enforced disappearances. Access to justice is systematically denied to victims and their families.

Enforced disappearance is part of the ruling party’s ongoing crackdown on freedom of speech. Disappearance, or threats of disappearance, is used to silence critics and repress the opposition.

The UN Working Group on Enforced or Involuntary Disappearances, the UN Committee against Torture, and the UN Human Rights Committee have all expressed their concern over the Bangladesh government’s failure to disclose information regarding arbitrary arrests, unacknowledged detention, and enforced disappearances.

Bangladesh government authorities have failed to respond to the repeated calls from families of the disappeared for investigations into the enforced disappearance of their loved ones. Victims and their families are met with repeated obstacles to legal redress, including police refusal to file cases and threats to drop cases. This is exacerbated for members of the opposition and those who criticize the incumbent government and the ruling party. Families of victims of enforced disappearances face serious threats and harassment by government authorities when they protest such unlawful treatment and injustice or when they seek to determine the whereabouts of their loved ones. Meanwhile, law enforcement enjoys a culture of impunity, perpetuated by the ruling party’s refusal to acknowledge the occurrence of enforced disappearances or hold security forces accountable.

The Awami League-led government’s persistent denial that enforced disappearances occur in Bangladesh and its refusal to credibly investigate the fate and whereabouts of disappeared persons is an abdication of responsibility to address this serious violation of human rights, the groups said.

Although enforced disappearances had taken place earlier, this practice has increased exponentially since the present Awami League-led coalition took office in 2009. Numerous members and supporters of the political opposition were subjected to enforced disappearance around the 2014 general election, which the major opposition parties boycotted, leading to the Awami League coalition’s return to office.

Ahead of the 2018 general election, there were at least 98 reported cases of enforced disappearances by security forces. International observers raised serious questions about whether the 2018 election – which brought the Awami League to power for a third consecutive term – was free and fair, given reports of attacks on the opposition, including through enforced disappearances.

Enforced disappearances have continued during the Covid-19 pandemic. At the same time, the economic hardship caused by the pandemic has had a detrimental impact on the mental, social, and physical well-being of the families of the disappeared; and on their ability to search for their loved ones. Many of these families are facing increased economic hardship since the outbreak of the Covid-19 pandemic, since in many cases the victims of enforced disappearance were the family’s primary income earners. The lockdown measures and diminished capacity of the courts have further undermined the ability of the families of the disappeared to seek remedies.

The Government of Bangladesh has yet to sign or ratify the International Convention for the Protection of All Persons from Enforced Disappearance.

The Convention defines enforced disappearance as “the arrest, detention, abduction or any other form of deprivation of liberty by agents of the State or by persons or groups of persons acting with the authorization, support or acquiescence of the State, followed by a refusal to acknowledge the deprivation of liberty or by concealment of the fate or whereabouts of the disappeared person, which place such a person outside the protection of the law.” Enforced disappearances are grave violations of international law. When committed as part of a widespread or systematic attack on a civilian population, they are crimes against humanity.

Bangladesh is a member of the United Nations Human Rights Council. The Human Rights Council should bring a resolution calling for an independent investigation into all allegations of enforced disappearances, torture, and extrajudicial killings committed by the law enforcement and intelligence agencies in Bangladesh.

Above all, all the disappeared people held in state custody should be safely returned to their families and those responsible for their disappearance should be held accountable, the groups said.

This joint statement is endorsed by:

The Advocates for Human Rights is a volunteer-based non-governmental organization committed to the impartial promotion and protection of international human rights standards and the rule of law. Established in 1983, The Advocates conducts a range of programs to promote human rights in the United States and around the world, including monitoring and fact finding, direct legal representation, education and training, and publications. www.theadvocatesforhumanrights.org

The Anti-Death Penalty Asia Network (ADPAN) is a regional network of organizations and individuals committed to working towards abolition of the death penalty in the Asia Pacific. ADPAN was founded in Hong Kong on the World Day against the Death Penalty in 2006. https://adpan.org/

The Asian Federation Against Involuntary Disappearances (AFAD) is a federation of human rights organisations working directly on the issue of involuntary disappearances in Asia. Envisioning a world without desaparecidos, AFAD was founded on June 4, 1998 in Manila, Philippines. AFAD was the recipient of the 2016 Asia Democracy and Human Rights Award conferred by the Taiwan Foundation for Democracy. www.afad-online.org

The Asian Human Rights Commission (AHRC) was founded in 1984 by a prominent group of jurists and human rights activists in Asia. The AHRC is an independent, non-governmental body, which seeks to promote greater awareness and realisation of human rights in the Asian region, and to mobilise Asian and international public opinion to obtain relief and redress for the victims of human rights violations. http://www.humanrights.asia/

The Asian Network for Free Elections (ANFREL) was formed in November 1997 to promote and support democratization in Asia at the national and regional levels. It has since established itself as the foremost NGO working for democratic elections in the region. ANFREL has 27 member organizations hailing from 17 different countries in Asia. https://anfrel.org/

The Asian Forum for Human Rights and Development (FORUM-ASIA) is a Bangkok-based regional network of 81 member organisations across 21 Asian countries, with consultative status with the United Nations Economic and Social Council, and consultative relationship with the ASEAN Intergovernmental Commission on Human Rights. Founded in 1991, FORUM-ASIA works to strengthen movements for human rights and sustainable development through research, advocacy, capacity-development and solidarity actions in Asia and beyond. It has sub-regional offices in Geneva, Jakarta, and Kathmandu. www.forum-asia.org

Mayer Daak (“Mother’s Call”) is a platform of the families of victims of enforced disappearances in Bangladesh with the common goal of seeking the whereabouts of their loved ones and advocating for justice for the victims.

Odhikar is a registered human rights organisation based in Dhaka, Bangladesh established on October 10, 1994 by a group of human rights defenders, to monitor human rights violations and create wider awareness. It holds special consultative status with the ECOSOC of the United Nations. www.odhikar.org

The World Organisation Against Torture (OMCT) is an international non-governmental organisation based in Geneva, with offices in Brussels and Tunis. The OMCT works with around 200 member organisations, which constitute its SOS-Torture Network, to end torture and ill-treatment, fight impunity and protect human rights defenders worldwide. Helping local voices be heard, we support our vital partners in the field and provide direct assistance to victims. www.omct.org