Home / News / PAKISTAN: Special birthday for Malala-a significant inspiration for us all: when education is more powerful than weapons

PAKISTAN: Special birthday for Malala-a significant inspiration for us all: when education is more powerful than weapons

“Even if they come to kill me, I will tell them what they are trying to do is wrong, that education is our basic right.”

These words are from the well-known, young and brave activist Malala Yousafzai. She is from a remote area of Swat in Pakistan, and she advocates for the promotion of girls’ education. In 2012, the Taliban commander Maulana Fazlullah, along with his allied militants, took over the Swat Valley, banning television, music, girls’ education and women going shopping. The tyranny of the Taliban compelled Malala to highlight the difficulties faced by the girls of her area in trying to go to school. She spoke out through ‘Malala’s Diary‘ on the BBC Urdu blog. As a result, the shackled minds of the Taliban became afraid of her fearless and innocent struggle for girls’ education. They felt provoked by Malala’s determination as she refused to accept the Taliban’s doctrines and challenged them with her firm motivation to continue to attend school. They tried to gun her down when she was returning home by bus with her school mates. This despicable attack captured international attention and millions of people stood up with this new little icon of Pakistan, condemning the cowardly act by the Taliban. Within the country, this ignominious attack lead to a great mind shift among the Pakistani people in relation to the Taliban and their dictates. 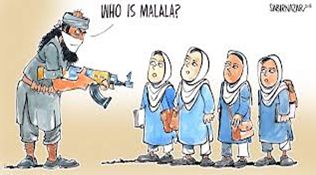 Today, July 12 2013, Malala turns 16 and the international community will celebrate this day as Malala Day. In support of the UN Secretary-General’s Global Education First Initiative, she will give her first official speech on the right to a quality education and safe environment for girls, before world leaders and youth activists at the United Nations’ Headquarters in New York.

Over the past decades in Pakistan, many attacks have been carried out by orthodox forces on students, educational institutions and academic staff. A series of terrorist attacks on school buses, students, teachers, and institutions took place in Pakistan in order to create a serious fear among the youth of getting an education. Fundamentalist groups oppose education since it provides people, young generations especially, with powerful means for intellectual independence, social advancement and personal emancipation. Fundamentalists use the weapon of terrorism as a tool to stop Pakistani young people from getting a secular education, through which they can potentially develop alternative reasoning.

They have not only targeted institutions, but also individual teachers and university students. In a very recent attack on a university in June this year, fourteen female students were killed and another twenty were injured when a female suicide bomber from the religious terrorist group Lashkar-e-Jhangvi blew up herself on a bus in Quetta.

The Taliban are not only targeting schools, universities, students and staff in the northern parts of the country; they are operating all over Pakistan, as their affiliated members are scattered in different areas. Sadly, all this is happening under the nose of national law enforcement agencies. Hence, one can understand how Osama Bin Laden managed to hide in the Abbotabad Cant area, which is only one kilometere away from the Army’s Kakul academy, with our security forces claiming that they never came to know about it. 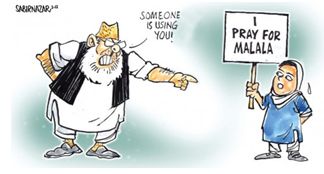 Despite the difficult circumstances, several persons from Pakistani’s civil society have been struggling for peace and protection of human rights by firmly raising their voices, even if, at times, this means putting their lives at risk. Activists, who are working to guarantee access to education and women’s rights, are also targeted. A female Pashtun activist from the Khyber agency was killed by the Taliban last year because she was working for social welfare and girls’ rights. The same happened to female polio aid workers, who were gunned down by the Taliban. In 2009, two bombers attacked the female cafeteria of the Islamic University Islamabad. Six students were killed and 18 students were injured.

We know this is not the end of the story. In recent years, we have seen the increase of religiously influenced legislators within public institutions and political parties, who have followed one other into a series of anti-women statements and behaviours. According to some reports, the legislator Maulana Abdul Haleem of Jamiat Ulema-e-Islam (Fazlur Rehman) came up with a prolonged series of misogynist fatwa’s against women by declaring formal education of women to be un-Islamic. According to this man, education for a woman is against the precepts of Islam. He asked parents not to send their daughters to school and he had the courage to publically state that families who send their daughters to school will be liable to burn in hell.

One of the Taliban leaders, Qari Muhavia, said: “We will never allow the girls of this area to go and get a Western education.”

The Taliban follow their own doctrines based on a strict interpretation of the Sharia law. If anybody goes against these laws, they assassinate them in cold blood. They justify their attacks by manipulating and reinterpreting Quranic verses in faulty ways. For them, education means secularism, which in their mindset leads to anti-Islamic behaviour. As a consequence, they are against schooling, reading and any other formative activities that enable people to think independently and develop rational perspectives. Fundamentalist groups, who have rising influence throughout the country, dictate a society where women are not entitled to equal rights. Their extremist, fanatical and intransigent model of society does not allow women’s participation, recognition and appreciation.

The attack suffered by Malala last year shook some of the conservative sentiments in Pakistan while also opening new doors for strengthening the education system in the country. Since last year, the government has been working more extensively in an attempt to achieve the United Nations Millennium Development Goals, which emphasize primary education for all and gender equality. The government of Pakistan has officially made education compulsory and free. In reality, around 1.5 million children at the age for primary level schooling are denied the right to education and, out of this number, girls represent the 68%. The government of Pakistan has decided to increase its budget for education; the previous budgetary allocation for education was very low.

It is all of our responsibility to stand beside Malala and to be brave and willing to even deal with possible threats, so that conservative mindsets understand that the peace-loving population of Pakistan is ready to stand against them. We all have to prove that we are not afraid of cowardly fundamentalists who use the power of their weapons to intimidate the rest of the country. We must truly believe that their weapons are weaker in comparison to the power of the pen.

Malala has become a symbol of courage, demanding justice and expressing our desire for empowerment, not only for girls and young women in Pakistan, but for the entire world. At such a young age, she is an inspiration for millions of girls who share similar stories of deprivation among some of the most conservative and inflexible mindsets on earth.

About the Author: Nida Nida is working on youth issues in Pakistan and is office bearer of Progressive Youth Forum (PYF) Pakistan. She can be reached at: nida@ahrc.asia

« INDIA: Cultivators – Farmers and Agricultural labourers in Census 2011 – The other side of agricultural growth in Madhya Pradesh