Home / News / INDIA: Cultivators – Farmers and Agricultural labourers in Census 2011 – The other side of agricultural growth in Madhya Pradesh

INDIA: Cultivators – Farmers and Agricultural labourers in Census 2011 – The other side of agricultural growth in Madhya Pradesh

Perhaps, I may not arrive at any conclusions in this feature article. I am in a dilemma over the veracity of the data available on the state agriculture. Perhaps you could help me in this effort. Chances are you could be befuddled as me on the matter!

In 2012 Madhya Pradesh government prepared an integrated agriculture budget deviating from the practice of preparing separate budgets for agriculture and its allied sectors. The same year, Rashtriya Kisan Sangh (National Farmers Organisation affiliated to Rashtriya Swayamsevak Sangh/RSS) picketed in the state capital with one hundred thousand farmers. In January 2013, the President of India felicitated Madhya Pradesh government with “Krishi Karmanya Puraskar” (Award for agriculture excellence or achievements of the highest order in agriculture). There is no better feeling than the farmer and the farm workers are, not only merely alive but, better paid off and living a contended life. What else a grateful society would desire of their food providers-the annadatas1!

At a time when, it was told that, the national agriculture development rate was oscillating around 2 per cent, Madhya Pradesh had had an agriculture development rate of 18.96 per cent in 2011-12. It was reported that there was an increase (in production over previous year) of 54% in pulses, 43% in grains, 10% in cotton and a whopping 143% in oilseeds in 2011-12. The increase is not limited to just four crops; there was unprecedented increase in coriander, red pepper (chillies), garlic and fruits production, too. The food grain production increased from 16 million tonnes in 2010-11 to 19.46 million tonnes in 2011-12. Madhya Pradesh contributes 22.54 per cent in the National pulses production while four hundred thousand hectare land is producing fruits, flowers and vegetables. Madhya Pradesh contributes 37 per cent and 54 per cent respectively in the National garlic and soybean production. That was marvellous!

When statistics is splattered in beautiful colours all around, the doubts and concerns are relegated to the remote corner of the mind and the hope takes flight that agriculture is on a sustainable path to glory in our state. Now, the latest data has come out: the State has increased its production of food grains by 2.31 tonnes in 2012-13 (over 2011-12); the agriculture development rate has been 13.33 per cent this year.

Madhya Pradesh has set a highly commendable goal for itself-to make the agriculture a profit making industry or business. For this it advanced 10.8 thousand crore of rupees loan last year (2102) and 12 thousand crore rupees loan would be disbursed to the farmers in 2013. When the rate of credit disbursement is increasing at 8 per cent per annum, would the debt-ridden farmers have any stakes in this seemingly unrealistic agriculture growth rate? Could we also overlook farmers’ suicide, failing to subside despite high agriculture growth? From 2001 to 2012, last twelve years, 16190 farmers committed suicide in Madhya Pradesh! 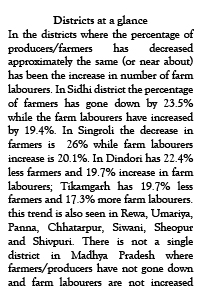 Just at this point, on 10th June 2013, the subsequent list of the state census data was released. It has information about people working in agriculture and allied fields. From 2001 to 2011, the total population of Madhya Pradesh increased from 6.038 crore to 7.26 crore or an increase of 1.22 crore people in a decade. With increase in the number of population there should be concurrent increase in livelihood and employment opportunities for the people; or in simple words, the number of working people should increase. Census lingua franca calls this “working population”. The working population of the state increased from 42.74 per cent (2.57 crore people in absolute numbers) in 2001 to 43.47 per cent (3.15 crore in absolute numbers). So in last ten years 57.80 lakh (5.78 million) job opportunities increased or were created in Madhya Pradesh. That sounds extremely good!

Along with agriculture, these ten years were crisis ridden for domestic household industry (cottage industry). In one decade, the number of people working in cottage/household industry went down from 1.033 million to 0.959 million workers.

Let me come back to agriculture and people engaged in agriculture. The data from 2011 census show the other side of the glossy picture unfurled during “Krishi Karmanya Puraskar” (excellence in agriculture award) in January 2013. From 2001 to 2011, the number of farmers (either own land or patta given by the government) has gone down from 11 million to 9.88 million; in other words, 1.193 million farmers stopped being farmers or changed their profession (existing farmers). The government could gloat over this as an achievement of its policy to move people from farming to other industries and businesses. The government always maintained that the dependency on agriculture is very high but its share in gross domestic product is (comparatively) low. Perhaps these farmers sold off their land in the land market with soaring prices, earned millions of rupees and are living a life of luxury in the new found riches. If this was the case, excellent; the farmers would not need to end their life in misery committing suicide.

The government is firmly committed to move the farmers from farming. Can we believe thus that the number of people engaged or working in farming have come down? The above (census) data evidently rejects the proclamation!

71.48 per cent (18.4 million people) of the total working population was engaged or directly associated with agriculture as farmers and farm labourers in 2001. This has increased to 82.89 per cent (22 million people) in 2011, an increase of 3.598 million in ten years. Not only this, 59.86 per cent of the total working population was dependent on agriculture and related work in 2001. In ten years this has increased to 69.79 per cent. And the increase has not been in the number of farmers but number of farm labourers (landless labourers); the number of farmers has come down by 1.193 million while farm labourers have increased by 4.791 million.

If we look at the comparative percentages, has the dependency on agriculture come down in relation to other sectors? The answer to this, too, is a big no. 12.26 per cent people (total population) were farm labourers in 2001 which has increased to 16.79 percent. In ten years total increase in working population has been 22.41 per cent but increase in farm labourer has been 64.74 per cent. So in a sense, only farm-labour opportunities have increased in Madhya Pradesh!

The government openly, and brazenly, declares that cheap agricultural land is available (for sale) in the state and, we (the government) will give concessions and rebates in taxes and other matters. The red carpet invites the companies to come to Madhya Pradesh and have absolute control over natural resources. A free licence to exploit and loot, in other words! This would pave way for development of the state!

The state government policies are directed to make farming a profit making industry or business. The census numbers are crying hoarse as for whom the government has turned farming into a profitable endeavour? At least, not for farmers of the land! 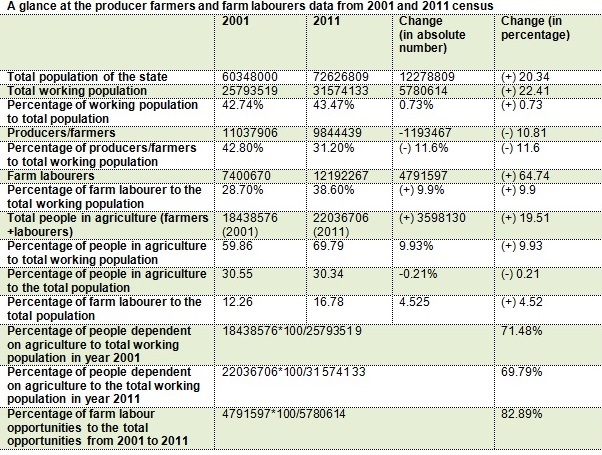 About the Author: Mr. Sachin Kumar Jain is a development journalist, researcher associated with the Right to Food Campaign in India and works with Vikas Samvad, AHRC’s partner organisation in Bophal, Madhya Pradesh. The author could be contacted at sachin.vikassamvad@gmail.com Telephone: 00 91 9977704847

PAKISTAN: Ahmadis killed and gravely wounded in attacks; police ask for fictional ‘No Objection Certificate’ to prevent Ahmadis from praying  »