The smallest ethnic and religious community of Pakistan is fighting for the survival of its culture and religious identity, in the face of religious extremism, forced conversion, migration, and climate change. Are we going to allow this rich culture to vanish from the pluralistic land of Pakistan? 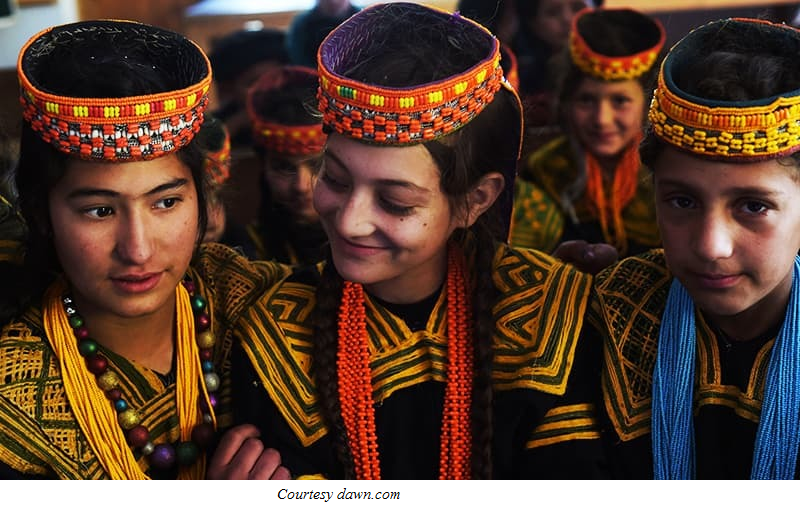 The Kalash people live primarily in the Kalash Valley, Chitral District, Khyber Pakhtunkhwa Province of Pakistan. Chitral District is connected to Nuristan, a province of Afghanistan. Nuristan is also known as a Kafiristan, and the culture in this Afghanistani Province was similar to that of the Kalash. However, the people of Kafiristan were converted to Islam in 1890’s and then Kafiristan became Nuristan.

Chitral District is divided into two major ethnic communities, Kho and Kalash. The Kho’s are Sunni Muslim and Ismaili Muslims. The Kalash follow their traditions and belief systems. In the 1900’s the Kalash tribe was a majority in Chitral District. Now situation has changed. Only around 4,000 people belonging to the Kalash tribe are living in the Valley. Now the majority have become a minority. Are we allowing them to vanish? Will the Chitral Kalash become the new Nuristanis?

In recent years, the Kalash in Chitral have been threatened by the Taliban, and have borne the brunt of forced conversion, migration, and climate change. Since, 2010 the people of all three Kalash Valleys (Bumburet, Rumbur and Birir Valleys) have been under growing pressure of floods as well. With hardship they restore their lives in a year after the floods, but are again and again struck and hit by destructive flooding. The source of the problem is understood to lie in the high pastures, where hundreds of goats and sheep trigger floods, the end result of hundreds of thousands of tiny hooves.

Climate change has simply compounded other problems that the Kalash have faced recently, as migrants have moved into their valleys. Some of these migrants are brainwashing the Kalash people. There have been many conversions to Islam in 2015.

According to the news published in Daily mail UK, around 100 people from Kalash have converted to Islam in the past few years (See: http://www.dailymail.co.uk/wires/afp/article-3311491/Blaming-Kalash-calamity-north-west-Pakistan.html)

Recently, hundreds of Muslims clashed with members of Kalash tribe in Chitral in June 2016, after a teenager claimed she was forced to convert to Islam. That was not first such incident either. Tribe members have been facing threats and have been attacked by the Taliban for many years now.

In September 2009, the Taliban kidnapped the last Greek volunteer, Mr. Athanassious Lehraous; he was part of a team from Greece helping the Kalashis re-build their traditional structures. Mr. Lehraous was released after around eight months in Taliban captivity. No other Greek volunteer has come to the Valleys ever since.

In August 2012, militants came from Nuristan Province of Afghanistan, sneaked into the pasture land of Bumburet Valley, killed a shepherd from the Kalash community, and took away a herd of 200 goats.

And, in 2014, a video emerged wherein the Tehreek-e-Taliban Pakistan (TTP) announced an armed struggle against the Kalash, calling on Sunnis to support their cause. (http://www.dawn.com/news/1086564)

Consequently, in 2014, a three judge bench of the Supreme Court, headed by Chief Justice Tasaduq Hussain Jillani took notice of the news reports that the indigenous Kalash community was under threat to convert or face violent consequences.

The Khyber Pakhtunkhwa government revealed before the Supreme Court that nearly 3,500 inhabitants of Kalash Valley in Chitral District have faced death threat from militants. And, these threats and attacks have not stopped.

In August 2016, armed militants from Afghanistan’s remote Province, Nuristan, attacked shepherds in the high altitude pastures of Kalash Valleys in three separate incidents. In August, on a pasture in Bumburet Valley, the outsiders stole around 400 animals and killed two Kalash shepherds who resisted the attack.

For the Kalash, who survive on goats and goat milk during the long winter months, such attacks can be a massive setback. It is estimated that militants have stolen around 2,500 goats and sheep in such attacks. Livestock also plays an imported role in Kalash festivals, which are a part of their unique culture and religion.

Despite government having made an Army check post in the area, the attacks have continued without hindrance. The State has not taken adequate measures to protect and provide security to this indigenous community to preserve their rich culture from militancy, forced conversion, and natural disasters.

Articles 28 and 36 of the Constitution of the Islamic Republic of Pakistan detail the following:

“Article 28. Preservation of language, script and culture—Subject to Article 251 any section of citizens having a distinct language, script or culture shall have the right to preserve and promote the same and subject to law, establish institutions for that purpose….

Article 36. Protection of minorities — The State shall safeguard the legitimate rights and interests of minorities, including their due representation in the Federal and Provincial services.”

On one side, the State has given rights and protection to the religious minorities in the Constitution. On the other hand, the State’s own Department, NADRA (National Database and Registration Authority), has included all religions, but no room has been provided to the Kalash for their identity as a legitimate indigenous ethnic community.

The Kalash people, in order to protest against discrimination and exploitation of their rights, even boycotted the General Elections of 2013.

The discrimination against Kalash tribe was highlighted in a letter to Chitral News, which has been reproduced in full below:

“The Kalash, the indigenous and original inhabitants of Chitral, are still being deprived of their constitutional rights in the following way.

1.Our religion is not included in the list of religions and we are being forced to show Buddhism or Islam as our religion.

2. Kalash students are being taught Islamiat in schools, whereas they should be taught ethics instead of Islamiat.

3. KPK government has included 12 languages to be taught in schools but Kalash language hasn’t been included despite the fact that we have developed our text books up to grade 18 with the help of the Greeks.

All these issues are leading to more and more conversions and the tribe is endangered. Islam does not allow suppressing minorities; it rather instructs to protect them. Help preserve the Kalash from extinction.”

Based on the UN General Assembly resolutions, the Kalash culture should be declared a UNESCO World Heritage site. The global community should undertake serious efforts for the protection and conservation of Kalash culture.

The subject of ethics should be introduced in Kalash Valley schools instead of Islamiyat, to check the progress of forced conversion of Kalash youth by Muslim teachers. The Government of Pakistan and UNESCO should give international exposure to the Kalash ethnic community, by arranging foreign visits to World Heritage sites. The Government of Pakistan should allocate a separate seat for the Kalash minority both in the Provincial and in the National Assembly.

The Government should also allocate a quota and scholarship programs for Kalash students in professional colleges and universities in Pakistan, and also a quota system for employment in different departments. The Kalash religion is not recognized or included in the NADRA database, which creates further hurdles for the Kalash people.

The statement of the Founder of Pakistan Mohammad Ali Jinnah, in his address to the Constituent Assembly, August 11, 1947, is pertinent:

“You are free: you are free to go to your temples; you are free to go to your mosques or to any other places of worship in the State of Pakistan. You may belong to any religion, caste or creed that has nothing to do with the business of the State… We are starting with this fundamental principle: that we are all citizens and equal citizens of one State. Now I think we should keep that in front of us as our ideal and you will find that in course of time Hindus would cease to be Hindus and Muslims would cease to be Muslims, not so in the religious sense because that is the personal faith of each individual, but in the political sense as a citizen of the State.”

Last, but not the least, the Government of Pakistan should prepare a comprehensive development package for the Kalash minority. The package should include certain incentives to protect the threatened and endangered community.

About the Writer: The writer is intern at AHRC and can be reached at; arslan.barijo@ahrc.asia

INDIA: Mewat rapes and murders expose the total failure that is the police »