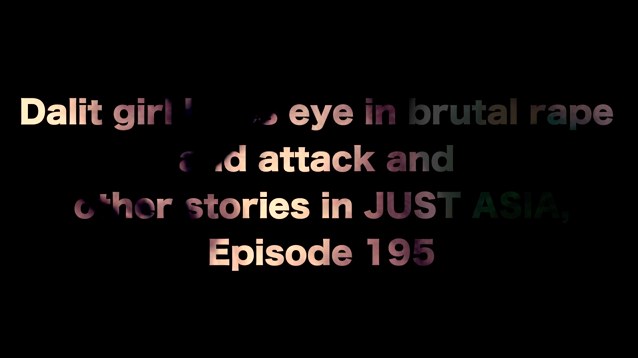 This week Just Asia begins with Nepal, where a 14-year-old Dalit girl was raped by a 19-year-old youth. After raping the girl on October 28, the non-Dalit Santosh Shrestha tried to kill her by slashing her with a sickle, and gouging out her left eye. The delay in receiving treatment cost the girl her left eye. Santosh has now been arrested.

India’s Supreme Court has directed police in the state of Kerala to present Hadiya in court on November 27. Hadiya, previously known as Akhila Ashokan, adopted the Islamic faith and married a Muslim man in December 2016. Due to her father’s petition, the Kerala High Court annulled her marriage in May and placed her in her parents’ custody. The Supreme Court on Monday said that consent of an adult for marriage is prime, and hence wants to listen to what Hadiya has to say. This is much welcomed by women’s rights activists.

Next, police in Nepal have used excessive force on protesters protesting at the lack of investigation in the death of 11-year-old Laxman Shiwakoti. After nearly a month of no progress in the investigation, protesters accused the police of colluding with the suspects. During the protest, police resorted to indiscriminate baton charges, the use of rubber bullets and tear gas. The police also fired on protesters without clear warning, killing one person on the spot. Available YouTube videos even show police pelting stones at the protesters.

In Cambodia, a group of 55 NGOs published a letter last week, calling for a new Paris Peace Conference because of a “severe deterioration in the state of human rights and democracy” in Cambodia. The letter was released on the 26th anniversary of the Paris Peace agreements that ended conflict in the country. Last month, Cambodian police arrested opposition leader Kem Sokha, charging him with treason. Critics say the arrest shows Prime Minister Hun Sen strengthening his attacks on political opponents as the country prepares for a national election next July.

Next, Bangladesh is planning to introduce voluntary sterilisation of Rohingya refugees, nearly a million of whom have been staying in overcrowded camps in Cox’s Bazar district near the Burma border. Large families are the norm in the camps, where some parents have up to 19 children. While Bangladesh has run a successful domestic sterilisation programme for years, performing it on non-Bangladeshi nationals requires final approval from the health minister.

Moving to Indonesia, after nearly three years of the brutal Paniai attack on 8 December 2014, no one has yet been prosecuted. While President Widodo had stated on 28 December 2014 that, “I want this case [Paniai case] resolved as quickly as possible, so it does not reoccur in the future”, the President has since done nothing. Four indigenous Papuan children were shot dead, two adults seriously injured, and 17 others injured in the brutal attack by security forces at Karel Gobay Field, Paniai, Papua Province.

« NEPAL: Mysterious custodial death of a girl must be investigated