This week Just Asia begins with the case of Bangladeshi lawyer and human rights defender Adilur Rahman Khan, who was detained by Malaysian immigration authorities for more than 12 hours at Kuala Lumpur airport last week. Without giving any reasons for the detention, the authorities finally deported him back to Dhaka. Just Asia speaks to Adilur for details on his detention. 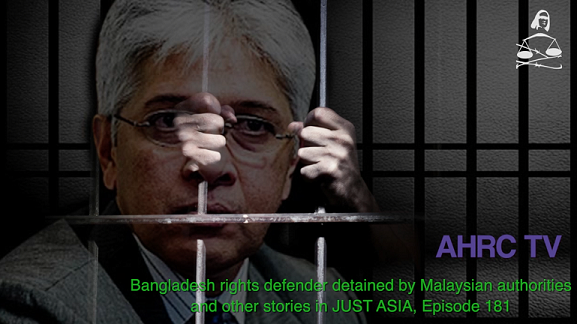 A horrific video surfaced in Nepal last week, showing the brutal beating of Manita Yadav. Family members and villagers were thrashing Manita for falling in love with a Dalit youth. The local Marchawar area police initially arrested Mina’s father, but released him soon after, due to local pressure. Only after much social media uproar, did the Rupandehi District police arrest Manita’s father, elder brother, uncle, aunt, and a villager, Pashupati Koiri.

Thailand’s sentencing of a military general and other senior officials in the country’s largest-ever human trafficking trial is a major step in combating trafficking and protecting migrant rights. The trial arose from the May 2015 discovery of mass graves containing 36 bodies of Rohingya migrants at a jungle camp in Thailand’s southern Songkhla province.

In Indonesia, a new report titled “Police in the shadow of torture” was launched by prominent NGO Jakarta Legal Aid on July 19. The report documents 37 cases of torture in and around Jakarta over the last three years, mostly committed by police officers. Speakers from the police headquarters, the Asian Human Rights Commission (AHRC) and the National Police Commission were present at the launch. Victims and family members also participated.

Moving to India, in April 2017, the Supreme Court agreed to hear a public interest litigation filed by MASUM, seeking an independent fact finding probe into allegations of extrajudicial killings, rapes and torture by officers of the Border Security Force in West Bengal. Given the recent favourable judgment of the Supreme Court in the case of extrajudicial killings in Manipur, it is hoped that in this case too, there will be quick hearings and a positive development for victims.