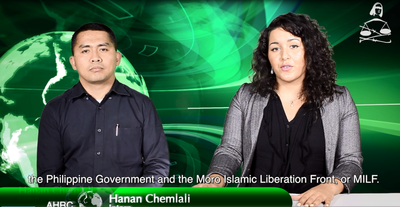 In this week’s programme we report on the encouraging peace agreement which has been signed in Mindanao, putting an end to a 40-year-old conflict between the Moro Islamic Liberation Front and the Philippine government.

In Qatar, hundreds of migrant workers have died in the slavery-like labour conditions on FIFA World Cup construction projects.

In India, the Supreme Court ordered for a time-bound adjudication of all trials involving legislators within a year. This is the first of a series of reports on court delays and what it means for justice in India.

India is the biggest importer of arms in the world while millions still lack basic health care. AHRC calls for the country to reconsider its priorities.

In our segment, Voices of Survivors: this week we hear from Hechin Haokip who was displaced from her mountain village in Manipur because of the on-going conflict but has managed to get back on her feet and help many vulnerable people in her community through human rights activism.

The bulletin can be watched online at AHRC YouTube. We welcome both human rights feeds to be considered for weekly news bulletin and suggestions to improve our news channel. Please write to news@ahrc.asia. You can also watch our Weekly Roundup on Facebook.

« NEPAL: Transitional justice is not an excuse for mass amnesty

PHILIPPINES: A peasant leader who was defending his land was hurt in a confrontation with thugs »