This week Just Asia begins with Pakistan, where 24-year-old Imran Ali has been given four death sentences for raping and murdering a six-year old girl last month. Zainab Ansari’s body was found in a rubbish dump in the city of Kasur on January 9, five days after she went missing. Ali has been linked by police to the murders and assaults of other girls in the area. 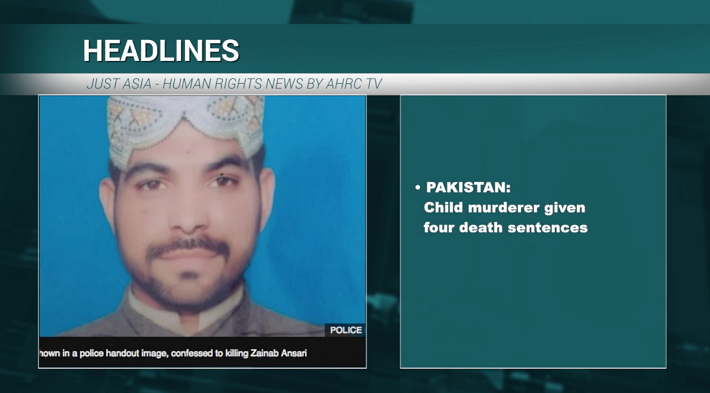 Next, Burmese and Bangladesh officials discussed this week the issue of repatriation of some 6,500 Rohingyas living in no-man’s land near Tambru along the border. There are some 700,000 Rohingya refugees stranded in Bangladesh, fleeing from what the international community has termed genocide since last August. Apart from safety, many Rohingya refugees are saying they want full citizenship rights before they are willing to return to Rakhine.

Next, Indonesian civil society is protesting against the amendment to the 2014 Legislative Law. The amendment grants the legislative body’s ethics council, the MKD, the power to press charges against those critical of the parliament and its members under article 122.

Furthermore, Article 245 allows for the protection of House members from prosecution of crimes. This is seen as a particular effort to protect parliamentarians from prosecution by Indonesia’s corruption watchdog.

Cambodia has recently passed a lese-majeste law obligating Cambodians to “defend the motherland” and forbidding them from insulting the king. Ahead of general elections this July, Cambodian Prime Minister Hun Sen has severely cracked down on free speech and civil liberties in the country. Opposition politicians and human rights activists have been jailed, and the country’s nominal free press has been disabled. Meanwhile, former opposition leader Sam Rainsy, currently in exile in Paris, has filed a lawsuit against Facebook in California, alleging that Hun Sen is paying the platform for false ‘likes’ to deceive voters about his support.

Lastly, a bizarre turn of events in India has led to teen actress Priya Varrier have multiple complaints filed against her for hurting Muslim sentiments. Varrier rose to fame after her music video performance for an upcoming Malayalam film. The song portrayed in the film is a traditional song from the Malabar region of North Kerala and offence has apparently been taken at the song used to portray a flirting scene. Complaints against the young actress and the director of the movie have been filed under Section 295 A of the Indian Penal Code relating to hurting religious sentiment. The case has spotlighted the law and its potential misuse in such cases.

« INDIA: Protect victims of trafficking along the Indo-Bangladesh border

CAMBODIA: The Cambodian Senate Elections: A Manifestation of the Government’s Human Rights Neglect »