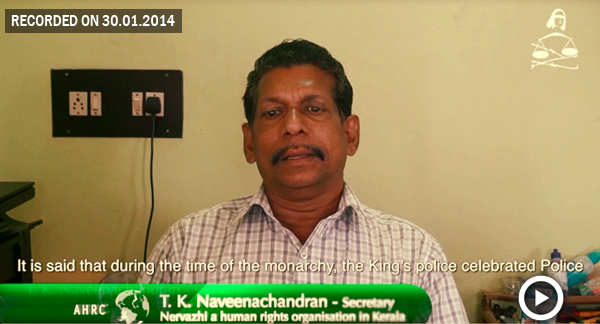 In this week’s programme we bring you the following stories from across Asia;

In the news from Kerala, India, fundamental questions are raised about the police participating in a traditional religious procession. The AHRC speaks to activists in Thrissur, Kerala, to explain how a police force — which does not have adequate resources to undertake basic criminal investigations can receive funds in contributions to the tune of INR 2 million to conduct the a full temple procession of the famous Guruvayoor ceremony.

In Bangladesh in an unique event unprecedented in history a Mule Parliament has been floated without opposition. This follows the Bangladesh Awami League’s renewal of power through the recently concluded elections there. Amidst a heavy boycott by all opposition parties, and in gross violation of the country’s controversial Constitution, 153 members of the party were ‘elected uncontested’ in the last elections. Observers and analysts have termed it a move towards an authoritarian governmental system.

We bring you news from Sri Lanka, where the Chief Justice, is attempting to introduce forced settlement of cases. The de facto Chief Justice Mohan Peiris has emphasized the need for the introduction of case management which connotes forcing parties into settlement, with judges playing an active role.

From Nepal, we bring you news of the indefinite hunger strike which passed its 100th day, of an Adhikari couple asking for justice for their son, Krishna Prasad Adhikari, who was murdered in 2004. Krishna, who had gone to Chitwan to visit his grandparents, never returned.

Also from Nepal, the government responds to a seven point demand by Dr. Govinda KC.

Lastly in Voices of Survivors: this week we focus on Philippines, and we talk to torture victim Rolly Panesa, a security guard who was illegally arrested, detained and tortured by the police.

The bulleting can be watched online at AHRC YouTube and we are welcome human rights feeds to be considered for weekly news bulletin and your suggestions to improve our news channel. Please write to news@ahrc.asia. You can also watch our Weekly Roundup on Facebook.

« WORLD: We apply the law without distinction, fear or favour – ICC Chief Prosecutor

NEPAL: State remains unresponsive to the missing person Chhori Maiya Maharjan, and her family wants to know where she is »