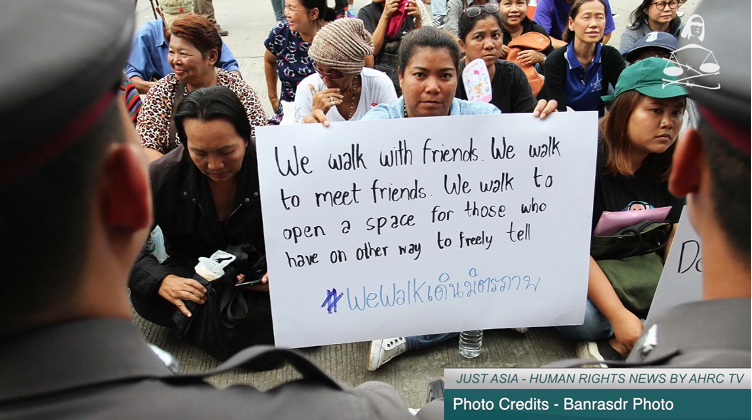 This week Just Asia begins with Thailand, where seven members of the People Go Network and a sociology professor presented themselves at a police station inPathum Thani Province on Wednesday. The activists were accused of breaching Article 12 of NCPO Order No. 3/2015, which prohibits the gathering of five or more people for political purposes, after they organized and participated in a peaceful solidarity walk. The walk aimed to raise awareness about the increasing suppression of freedom of expression, and the lack of inclusive development. For more information, Just Asia speaks to Lawyer Phattranit Yaodam, from ThaiLawyers for Human Rights.

Next, in India, Manipur police surrounded the residence of activist Mr. Ahongsangbam Pholen on January 27, and asked about his whereabouts. The police returned the next morning, and threatened the family members with arrest if they did not produce Mr. Pholen. Mr. Pholen is the Convenor of the People’s Action Committee against the killing of Pravish Chanam. The women’s wing of the Action Committee then organized a sit-in-protest near Mr. Pholen’s residence, decrying police action against a person spearheading the mass movement demanding justice for Pravish Chanam and ending racial discrimination towards people from India’s northeast.

Moving to Indonesia, Just Asia is pleased to report that the Jakarta police have discontinued the investigation into three labour activists of the Danamon Bank Labour Union. Due to significant public pressure on the Bank and the police to release the arrested activists, including an Urgent Appeal issued by the AHRC, the Bank management finally decided to discontinue the case.

In the conservative Indonesian province of Aceh, police forcibly shaved the hair of a group of transgender women and made them wear men’s clothing, in a crackdown on the LGBT community that has horrified human rights activists. According to the police chief, his men had shaved the women’s hair off and given them men’s clothes to wear, as part of their “coaching” to “become men”. Aceh province is the only part of Indonesia ruled by Islamic Sharia law.

Finally, protesters in Hong Kong gathered outside the government’s headquarters on Sunday evening after a leading pro-democracy activist was barred from standing as a candidate in upcoming elections. The ban on 21-year-old Agnes Chow, who was at the forefront of the 2014 Umbrella Movement rallies calling for political reform, is the latest blow for the democracy camp. The pro-Beijing Hong Kong government has previously barred independence activists from standing for office, but Ms Chow’s ban is the first against a more moderate campaigner.

INDIA: Harassment of activists working to ensure an impartial investigation into the suspicious death of Manipuri youth Pravish Chanam »