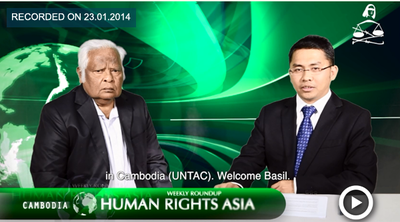 In this week’s programme we bring you the following stories from across Asia;

In Cambodia four persons were killed and many others wounded after police opened fire at protestors demanding an increase of the minimum wage. The AHRC joined the fact-finding team and we bring you the interviews with the wounded victims and families of the deceased. We also talk to Mr. Basil Fernando, the AHRC’s Director for Policy and Programme Development who was also a former senior UN official for its Transitional Authority in Cambodia (UNTAC).

In Nepal, Dalit villages fear displacement due to a water project. It is reported that 32 Dalit families from Barmajhiya village, in Nepal’s Saptari District are under threat of losing their homes.

A 19-year-old Sri Lankan RavindraKrishnapillai was executed in the United Arab Emirates on the 21st of January 2014 by a firing squad, and the deceased’s family complains of the denial of a fair trial before the verdict was pronounced. Incidentally this execution has been carried out whilst the President Mahinda Rajapaksa was on a state visit there , to meet Sheikh Mohammed bin Rashid Al Maktoum, Vice President and Prime Minister of the United Arab Emirates, and the ruler of Dubai and the Government of Sri Lanka failed to make any kind of diplomatic intervention to save Ravindra’s life, .

And in other news from South Korean President visits India to advance steel project, and concerns are raised about the eviction of villagers if the project goes through.
In Bangladesh, at least 25 people have reportedly been killed from the date of the ‘elections’ to January 23rd.

In Assam India, perpetrators have yet not been brought to book, in the case of two young girls, aged 12 and 18, being attacked with acid last November, in Kamar Gaon village in Assam. The AHRC is concerned that the police have so far remained indifferent towards the investigation, thereby assisting the perpetrators.

And this week in our segment voices of Survivors, we talk to a victim of discrimination in Nepal.

The bulletin can be watched online at AHRC YouTube and we are welcome human rights feeds to be considered for weekly news bulletin and your suggestions to improve our news channel. Please write to news@ahrc.asia. You can also watch our Weekly Roundup on Facebook.

« PAKISTAN: The total number of deaths in 2013 reached to 5665 in different incidents of violence

CHINA: For Freedom, Justice and Love – My Closing Statement to the Court »