The underlying principle on the prohibition on torture was first incorporated in Article 28 G paragraph 2 of the 1945 Indonesian Constitution. This article stipulates that “everyone is entitled of the right not to be tortured and to be treated with dignity.”  However, even after more than 10 (ten) years ratification, there has been no law which criminalises torture as a special and/or separate offence in Indonesia.

Even if Indonesia has not yet enacted a specific law regarding torture, so far, there has been numerous legal attempts with the intention to safeguard human rights, and in particular to facilitate the implementation of the Convention. For example, Law No. 13 year 2006 on Witness and Victim Protection which contains a provision to guarantee the protection of victim and witness from the practice of torture.

Witness protection exists in the Law No. 13 year 2006 concerning Witness and Victim Protection. This law aims to secure the rights of the witness and accord them with protection while giving their testimony. This regulation, although it has been in place since 2006, its effective implementation depends on the creation of the Witness Protection Agency and the appointment of its members.

The reluctance on the part of victims and witnesses to come forward to make complaints of torture comes initially from the fact that there is no law against which torture can be prosecuted and secondly, the fear of further victimization, since there is no comprehensive witness or victim protection law.

The practice of torture in Indonesia is already institutionalised. The practice of torture is deeply rooted because the police see it as a ‘source of income’, in a form of bribery when committing torture. Accordingly, this becomes an incentive to conduct torture for police officers with relatively low salaries. Form the legal point of view, the perpetrator should have been punished. However, punishment of the perpetrators is difficult as the victims are reluctant to file complaints and refuse to voice their sufferings. This whole situation makes the struggle to eliminate torture is even harder.

From the Report of the UN Special Rapporteur on Torture in 2008, it is known that most violations of the Convention occur in the process of interrogation and detainment. It was held by the Report that the practice of torture in Indonesia is systemic. This is due to the fact that it is the policy of military and police to use torture as “detention and special interrogation methods.” The method is proven to be used as a counter-insurgency manual prepared by the Indonesian army for its personnel in a dossier “secret.” Even if by statistics most of the cases occur in the process of detention and/or interrogation, the law No. 8 Year 1981 concerning Indonesian Criminal Procedural Law does not incorporate the provision to protect a suspected person from torture if it is used as interrogation method or if it is conducted in the period of detention.

The Committee Against Torture found through various practices of torture in Indonesia, such as that which happened in Aceh and Papua, that the members of Indonesian security forces and their auxiliaries committed, encouraged and condoned widespread and systematic torture and ill treatment of victims as a method of interrogation. In some cases of torture, the victims either died or suffered permanent injury. Considering the gravity of the event, the Committee Against Torture stipulated in their report that Indonesian Government should take more effective measure in dealing with torture issue.

Watch here the video of Hartoyo, a torture victim.

On 22nd January, 2007, at 11.30pm, Mr Hartoyo, an NGO worker in Aceh province, was at home with his partner Bobby when two men kicked down his front door and began assaulting them both.

After subjecting the victims to physical and verbal abuse, the attackers eventually decided to call the police. Four policemen arrived at the scene and took both men to Banda Raya police station.

While at the police station, the men were allegedly forced to strip down to their underwear, viciously beaten and subjected to verbal abuse. They were also sprayed with ice-cold water.

Mr Hartoyo also alleges that he was sexually abused by one of the officers and that Bobby was forced to perform oral sex on him. Bobby was also denied permission to go to the toilet and forced to urinate on Mr Hartoyo’s head.

The victims were later taken to a lock-up where they were denied their basic human right to contact a family member, and where Mr Hartoyo was severely beaten by an officer after innocently admitting to his cellmate that he was homosexual.

The next day at 9.00am, Mr Hartoyo was allowed to speak briefly with his fellow NGO workers. Both men were physically and mentally exhausted after their ordeal and decided against filing a formal complaint. They were made to sign a statement addressed to the Village Head Chief not to indulge in “homosexual actions again”. 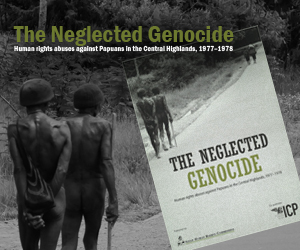 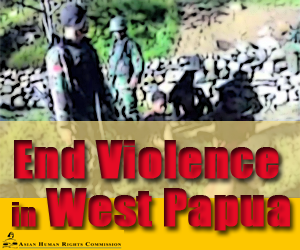 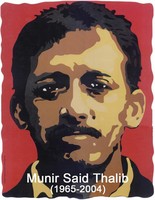 Indonesia’s human rights icone Munir was murdered in Sept 2004 for his human rights work. His perpetrators enjoy immunity!
No impunity for Munir’s murder.
Read our appeals and support the campaign

Alex Mahuze is a Malind tribesman and a sago farmer in Merauke. His clan has for generations lived in harmony with nature. The arrival of the Merauke Integrated Food and Energy Estate (MIFEE) program has forced him to earn money through other means, which ironically harms the environment. He lost his lands and his culture is threatened, but Alex fights on.

Legal framework regarding torture: On the Convention against torture: The Indonesian Government ratified The Convention Against Torture and Other Cruel, Inhuman or Degrading Treatment(hereinafter “the Convention”) on 28 September 28, 1998. The Convention has become part of the law of I...